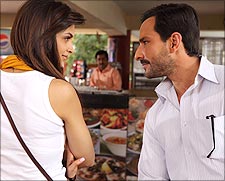 Prasanna D Zore feels that Aarakshan lacks the historical perspective and characters that we have come to associate with Prakash Jha's films after Mrityudand and Gangaajal. Post YOUR reviews here!

Aarakshan (Reservation) is not about what the title suggests. It is not what the word has come to mean for college students and everybody in general today -- a tussle between OBCs and the general category -- when they scramble for admissions to colleges and universities or seek jobs in the government sector, both of which have become a scarce resource in the face of an exploding population.

So you see a brilliant Dalit graduate Deepak Kumar (Saif Ali Khan) giving his piece of mind to three interviewers (obviously upper castes and taunting him over his caste, his intelligence -- which they judge based on his caste -- and his backwardness during the interview) teaching them what tehzeeb (honour/culture/respect) is all about.

Then, is that the reason why UP chief minister Mayawati has banned the film for two months because it shows the Dalits pitted against anti-reservation protesters? (Director Prakash Jha must profusely thank all these politicians for giving the movie such great publicity and some genius whoever titled this movie Aarakshan).

That said, the film is about an idealistic principal Prabhakar Anand (Amitabh Bachchan) taking on the might of a crafty Manoj Bajpai (hysterical throughout the film and more hysterical in the climax) and his cohorts who are out to mint money out of the business of education.

In fact, like most of us -- pro-, anti-reservation wallahs and all those in between -- who were in college when the Mandal agitation broke out in 1989 and who have today moved on in life despite reservations in colleges and government jobs, Jha, too moves away from the central plot of reservation, perhaps inadvertently.

The main plot then revolves around a morally upright and honest Amitabh trying to demolish a morally corrupt system that feasts on the economics of education and who feel insecure in the presence of idealists like Prabhakar Anand.

The film lacks the historical perspective and characters that showed guts and gall that one has come to associate with filmmaker Prakash Jha's style after Mrityudand and Gangaajal. Amitabh, as principal Prabhakar Anand, stands out as a tall figure amidst a sea of spineless characterisations that keep flitting in and out of the frame (there should be a special price for those who spot Saif moving to America for his PhD and coming back to be by the side of his idol Amitabh in his bad times).

Saif, Prateik and Deepika show their mettle -- and angst as pro- and anti-reservation wallahs -- as good actors whenever they get a chance. Their characters, though, lack depth.

Shankar, Ehsan, Loy's music is too loud and does little justice to the lyrics so beautifully penned by Prasoon Joshi. 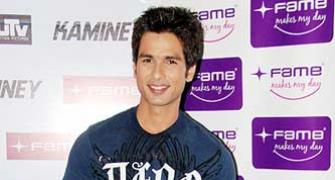 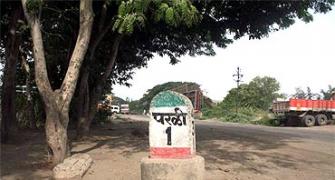 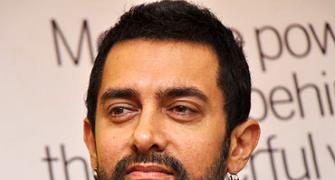 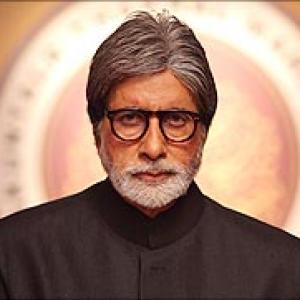 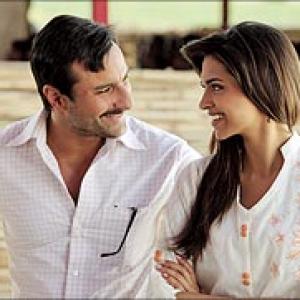