Rajinikanth needs a box-office hit after two successive flops in Kochchadaiyaan and Lingaa, both 2014.
Yet, Kabali is being projected as if the fans need the film, and the Tamil film industry needs it even more, says N Sathiya Moorthy. 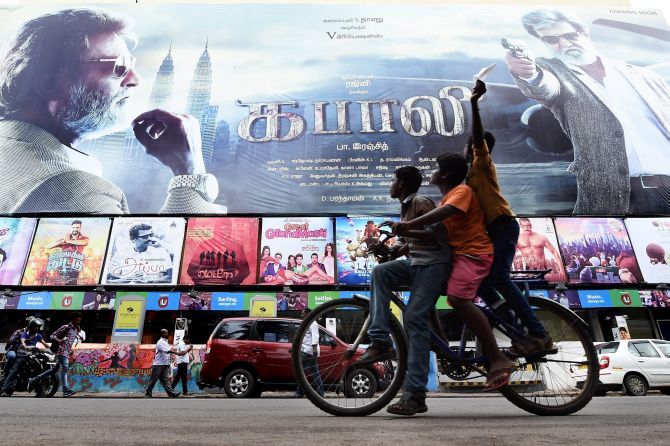 IMAGE: Rajinikanth fans celebrate after getting tickets for Kabali at a cinema in Chennai, July 19, 2016. Photograph: PTI Photo

If Rajinikanth's last superhit Robot (Enthiran in the Tamil version) in 2010 made news even before its release for its production values and director G Shankar's own success formula over the years, the same cannot be said of Kabali. Nor is there talk any more of Rajini joining politics, for fans and politicos to go ga-ga on release eve.

Kabali stands entirely on Rajini's shoulders for all the news it has been making over the past month and more. Director Pa Ranjith is not an unknown quantity, having tasted some success, but doing a Rajini flick was not up his street, until one of the superstar's daughters picked him up to wield the megaphone.

Being released in Tamil, Telugu and Hindi, the Japanese, Chinese and Thai versions are being planned in the coming weeks and months. It had begun with Muthu (1995), which grossed a high in Japan, a first for a Tamil movie.

The film gets an international audience straightaway among People of Indian Origin whose story it is all about. The film is about Tamil estate labour from British India, settled in Malaysia, whose cause the protagonist Kabali -- portrayed, of course, by the superstar --- espouses, in his inimitably action-oriented ways.

The script supports the superstar's near-life limitations like age and ageing looks, as Kabali ends up returning to his people after 25 long years, on a revenge mission against the baddies.

Unlike yesteryear stars like M G Ramachandran and Sivaji Ganesan and their fans, diehard Rajni fans do not relate to his donning youthful roles any more. Such films flop at the box office. Generation gap, did you say?

Kabali is the kind of pan-Tamil movie present-day Tamil audiences should lap up, given that even an otherwise apolitical actor like Suriya could not escape mouthing pan-Tamil lines in his 2011 commercial sci-fi, 7aum Arivu.

In recent years, Sri Lankan Tamils settled overseas have become big promoters of India-made Tamil films. The rich from among them have been funding and financing many a film made in Kodambakkam, the locality in the Tamil Nadu capital which is also referred to as Kollywood, on the lines of Hollywood and Bollywood.

It is another matter these audiences, and more so the financiers, have started dictating terms, even on the personal preferences and lifestyle of Tamil Nadu-based actors.

So much so, at the height of the conclusive Eelam war of 2009 in Sri Lanka, Tamil Nadu actors either publicly demonstrated where their sympathies lay, or had their more recent box-office hits pulled out of screens in Europe and Canada.

The enigma that Rajinikanth is, he continues to remain the superstar of Tamil filmdom (and possibly Indian filmdom as a whole) even though a new film of his rolls out only once in three years or so. This has been the case over the past 20 years.

For better or for worse, Rajni needs a box-office hit after two successive flops in Kochchadaiyaan and Lingaa, both 2014. Yet, Kabali is being projected as if the fans need the film, and the Tamil film industry needs it even more.

The Kabali teaser on YouTube had 10 million hits in the first two days, and crossed the 20 million mark equally fast. Both are records for any Indian film, including Hindi with a larger audience base and reach across the world.

Kabali is also said to have crossed other Indian films, most certainly Tamil films, in branding revenue. Just to point out, the last time a Rajini movie was used to market merchandise, Baba in 2002, it was a huge flop from show number one.

After Baba and later Lingaa flopped, Rajini compensated the films' distributors and exhibitors for their losses, setting a new rule that others were at times forced to follow. It is another reason why Rajini has remained the darling of Kollywood.

If industry sources are to be believed, although made at less than half the budget of Enthiran, Kabali's rights have already been sold for twice as much, nearer home and overseas.

The last time a Rajini film made it this big pre-release and afterwards too, you had all those superstar jokes flooding your sms and emails for weeks and months, each one better than the other, each one 'faster' than the other.

Likewise, the last time the one-word title of a Rajini starrer became a mantra for film fans in this part of the world, Baashha (1995), in which the superstar played a Bombay don, continues to echo in their ears to date.

Incidentally, the name 'Basha' got spelt out differently for the film's title, if only to bring out the intonation and effect that the makers wanted the audience to experience.

For Kabali is even better. Even before the film had hit the screens, Rajini's one-liner, 'Neruppu..da...Kabali..da' ('I am fire, I am Kabali.'), has outdone his other one-liners from films like Baashha: 'Naan oru thadavai sonnal nooru thadavai sonna mathiri.' ('If I say it once, it's as good as I have said it a hundred times.')

Rajinikanth is said to be shooting simultaneously for Shankar's 2.0, GenNext's way of naming Robot 2. His current stay away from home, in the US, is said to have more to do with health reasons than filmi purposes.

Rajini will miss Kabali's release in India, especially Chennai. Fans keep saying he will watch the movie in the US, and they too will have a chance to see him watching the movie on television that very day.

Until the Kabali release and Rajini's return home, fans will have to be satisfied with IT firms granting leave and booking full halls for shows on end for their professionals to watch the film on the big screen, day one, show one. Some firms are also said to be flying their staff to Chennai from Bengaluru, as an additional incentive.

And the reported reason of their HR bosses? 'Anyway the staff would "fall sick" that day, the next and possibly the next, too, and our schedules would go haywire. So why not join them and enjoy them?'

It makes sense. Robot saw IT firms and GenNext fans paying thousands of rupees for tickets that cost around Rs 125. For Kabali, the going rate is not that high when bookings opened, but over the weekend it could shoot up astronomically in the black market, depending on the early-bird views of a film that has already broken expectations as never before.

In the midst of all this, Rajini and Rajini alone stands tall. This time, unlike during Baashha, Padayappa (1999), or Enthiran, there is no talk of the superstar joining this political party or that, or launching one of his own.

As successive experience and elections showed, he had always bitten more than he could chew, especially of politics.

Rajini's experience and exposure of the past two decades seem to have ensured that he did not play with real 'fire' that politics is -- his old generation fans have thus lost hope while the GenNext crowd wants only fun, not politics, from him. 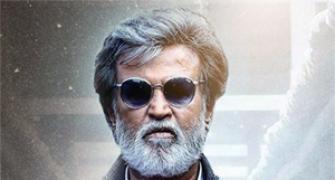 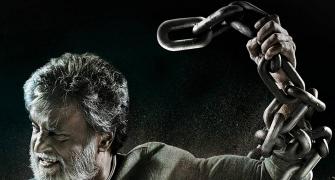 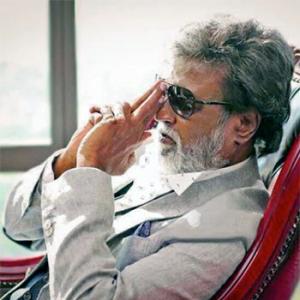 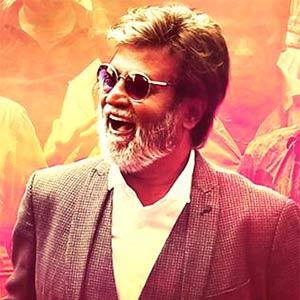