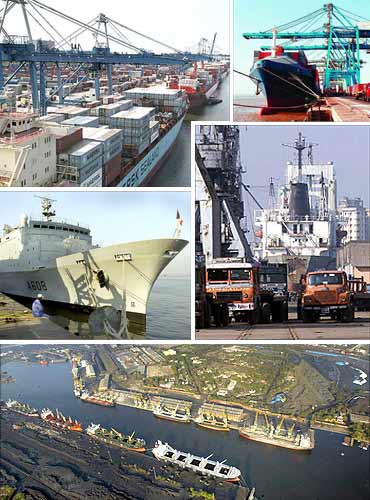 India, one of the biggest peninsulas in the world, has a long coastline spanning 7,600 kilometres. The Government of India planning to invest about $20.8 billion in 276 projects which are part of the government's endeavour to expand 13 major ports in the country, Shipping Minister G K Vasan said recently.

According to him 22 projects are ready for bids as the country is increasing the port capacity, mostly through public and private sector participation.

He also disclosed that mega container terminals have been planned at Vallarpadam, Chennai, JNPT and Ennore, implementation of which would provide opportunities in the logistics business. 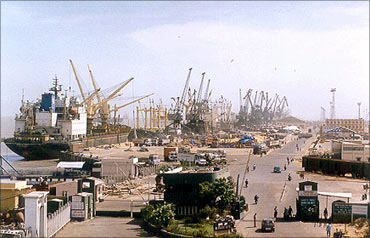 Kandla is a seaport in Kutch district of Gujarat state in western India. It is located on the Gulf of Kutch and is one of major ports on the west coast.

Kandla was constructed in the 1950s as the chief seaport serving western India, after the partition of India from Pakistan left the port of Karachi in Pakistan.

The port has adequate storage capacities in both dry and liquid areas and also seventy licensed private barges .

P D Vaghela is the chairman of the port. 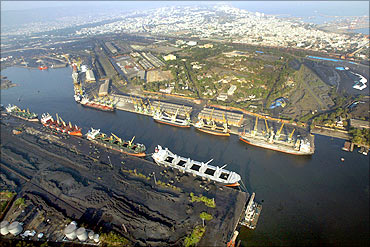 Image: A view of vessels at the Visakhapatnam Port
Photographs: Reuters

Visakhapatnam is one of the country's largest ports and is also home to the Eastern Naval Command of the Indian Navy.

In 1914, the proposal for construction of a harbour at Visakhapatnam was initiated. But the construction work started only in 1927 and continued upto 1933.

IT is one of the busiest ports in India and has striking similarities with Durban Port of Africa in the sense that the later is also surrounded by a hill on the south side.

It is the only Indian port having three International accreditations -ISO9001, ISO14001, OHSAS18001.

The chairman of Visakhapatnam Port Trust is Ajeya Kallam 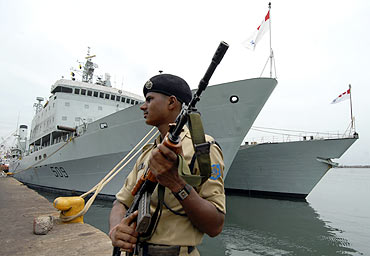 Chennai Port is an emerging hub port on the east coast of India. This gateway port for all cargo has completed 128 years of service to India's maritime trade.

It was formerly known as Madras Port. The initial piers were built in 1861, but the storms of 1868 and 1872 made them inoperative.

So an artificial harbour was built and the operations were started in 1881.In the first couple of years the port registered traffic of 30,00,00,000 tonnes of cargo handling 600 ships.

After independence the development activities of the port began.The topography of the port changed in 1964 when the Jawahar dock with capacity to berth 6 vessels to handle dry bulk cargoes was carved out on the southern side.

The Chennai port's share of Iron ore export from India is 12 per cent.

In 1983, the port heralded the country's first dedicated container terminal facility. Having the capability of handling fourth generation vessels, the terminal is ranked in the top 100 container ports in the world.

Atulya Mira is the chairman of the port.

The Chennai port is one among the major ports having terminal shunting yard and running their own Railway operations inside the harbour on the east coast. 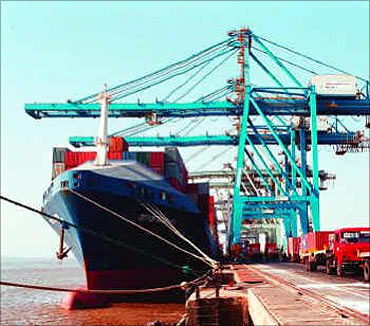 The port is run by the Jawaharlal Nehru Port Trust and controlled by the Central Government of India. The port provides round the clock pilotage to all ocean going vessels calling the port .It handles 65 per cent of India's container traffic.

It was created to augment the shipping capacity in Mumbai and provide an alternative to merchants wanting to save octroi charges imposed by the Brihanmumbai Municipal Corporation.

JNPT also has daily ferry service to the Gateway of India. It is well connected to major highways and rail networks in India. 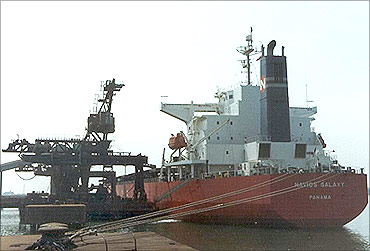 Paradip Port is one of the major ports of India  serving the eastern and central parts of the country. It is situated 210 nautical miles south of Kolkata and 260 nautical miles north of Visakhapatnam

The port mainly deals with bulk cargo apart from other clean cargoes.

Late Chief Minister of Orissa Biju Pattanaik is the founder father of Paradip Port.  Jawaharlal Nehru the then Prime Minister of India laid the foundation stone of the Port on January 3, 1962.

The construction of the Iron ore berth was completed in1966. Government of India declared Paradip as the eighth major port of India on  April 18, 1966 making it the first major port on the east coast commissioned in independent India.

Biplav Kumar is the chairman of Paradip Port. 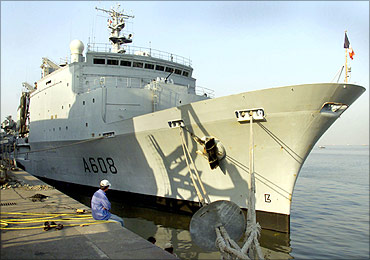 Mumbai Port was established as the Bombay Port Trust on June 26, 1873. Its first chairman was Col J A Ballard.

It has completed 135 years of dedicated service to the nation.

Mumbai port handles 11 per cent of the total sea-borne traffic of India.

The deep waters in the harbour provide secure and ample shelter for shipping throughout the year.

Rahul Asthana is the chairman of Mumbai Port. 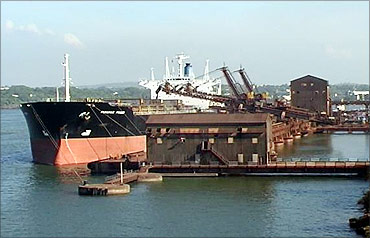 Mormugao Port is one of the oldest ports on the west coast of India.

It is the premier iron ore exporting port of India with an annual throughput of around 26.74 million tonnes of iron ore traffic. It was commissioned in 1888.

With the emergence of mining as a major industry in Goa, a master plan was evolved by the Portuguese for the development of Mormugao Port as an iron ore terminal.

In accordance with this, in 1959 M/s Chowgule & Co. Pvt. Ltd., was permitted to set up Asia's very first Mechanical Ore Handling Plant. The Liberation of Goa on December 19, 1961 marked the end of an epoch in Goan history.

Mormugao Port, went through a fair amount of change as the emphasis shifted to development of infrastructure. A couple of years after liberation, the port was delinked from the Railway management.

The exploitation of iron ore mines in Goa on a commercial scale since 1947, brought about revolutionary changes in the pattern of Mormugao Port traffic.

Mormugao was declared a major port in 1964.

Today, the iron exported through Mormugao constitutes 39 per cent of the total iron ore exports from India.

Praveen Agarwal  is the chairman of the port.

The major ports of India 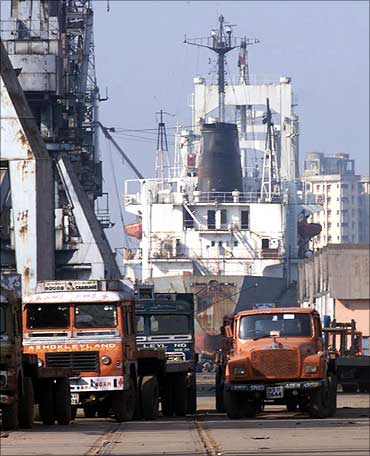 Kolkata is the oldest major port in the country.It is the only riverine port with two dock systems -- Kolkata dock system at Kolkata with the oil wharves at Baj Baj and a deep water dock system at Haldia dock complex.

It was initially conceived to promote and protect the British colonial interest. The affairs of the port were brought under the administrative control of the government with the appoinment of a Port Commission in 1870.

The port remains one of the pioneering and most promising ports of India. It commands a vast hinterland that comprises almost half of the Indian states (whole of the eastern and north-eastern regions) and the two neighbouring countries - the Himalayan Kingdoms of Nepal and Bhutan.

Kolkata Dock System is situated on the left bank of the river Hooghly and has a comprehensive range of facilities to handle and transport various cargo including heavy lifts.

It also has the largest dry dock facilities in India.

The Kolkata Port has been adjudged as the best managed port in the country recently .

M L Meena is the chairman of Kolkata Port. 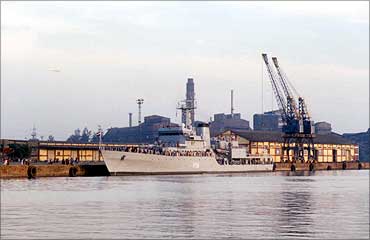 The New Mangalore Port, the only major port of Karnataka was formally inaugurated by the then Prime Minister of India, Indira Gandhi, on January 11, 1975.

P Tamilvanan is the chairman of New Mangalore Port. 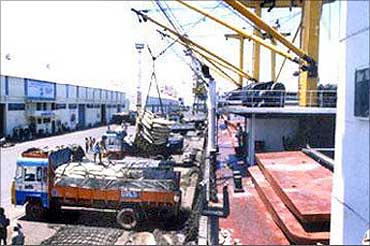 Tuticorin Port was declared as a minor anchorage port in 1868.

After Independence, the minor port of Tuticorin witnessed a flourishing trade and handled a variety of cargo meant for the neighbouring countries of Sri Lanka, Maldives, etc and the coastal regions of India.

To cope with the increasing trade through Tuticorin, the government sanctioned the construction of an all-weather port at Tuticorin.

Later, Tuticorin minor port and the newly constructed Tuticorin major port were merged and the Tuticorin Port Trust was constituted under the Major Port Trusts Act, 1963.

Tuticorin is the only port in Southern India to offer a direct weekly container service to US.

The port has good road and rail connectivity and has vast open space within and outside security wall for storage of cargo.

G J Rao is the chairman of the port. 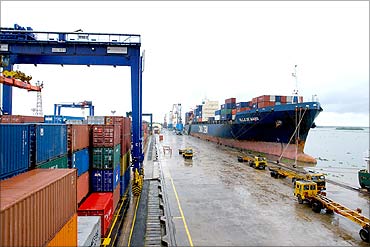 Cochin is the fastest growing maritime gateway to peninsular India. The Port of Cochin is located on the south west coast of India.

It is situated on the Willingdon Island which is an artificial Island tucked inside the backwaters. It was established in 1926.

The Cochin port was formed naturally due the great floods of Periyar in 1341 AD, which choked the Muziris port (Kodungallur), one of the greatest ports in ancient world.

Ever since the choking of Muziris, Cochin became one of the major ports with extensive trading relations Romans, Greeks and Arabs, all lured by the traditional spice wealth of the state.

The port further attracted European colonialists like Portuguese, Dutch and finally British who extended their supremacy over Kochi Kingdom and the port city of Fort Kochi.

Amongst all major Indian ports, Cochin is the closest to the International East West Shipping routes. This geo-strategic  location of Cochin gives it a distinct advantage.

It is all-weather natural Port, it is located strategically close to the busiest international sea routes from the Gulf to Singapore and Europe to the Far East circuits.

The logistically sensitive port is emerging as the most preferred investment destination for maritime commerce.

The chairman of Cochin port is N Ramachandran. 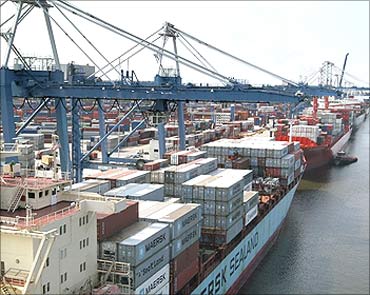 Ennore Port is the first port in India which is a public company. It is designed as Asia's energy port, has only 86 employees.

Ennore Port was originally conceived as a satellite port to the Chennai Port, primarily to handle thermal coal to meet the requirement of Tamil Nadu Electricity Board.

The port has adequate road and rail links. The port has obtained an in-principle approval from Southern Railway for providing rail connectivity to coal and iron ore stackyards.

S Velumani is the chairman-cum-managing director of the port.