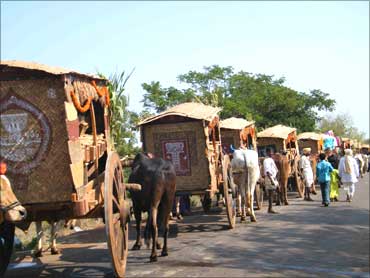 Twenty bullock carts decorated with paintings, colourful festoons, flowers, spikes of various crops and painted pots full of seeds of many varieties, moved along the streets of Pastapur, a small village in Medak district, in Andhra Pradesh to the accompaniment of drums, music and dance by men and women in colourful dresses. The mood was that of gay abandon and celebration.

In 30 days, the carts had covered 70 nearby villages across 60 to 80 kilometres. The procession on February 13 was the culmination of their successful journey.

It was not just another festival or just another journey; in a sense, the mobile seed banks celebrated the liberation of the Dalits from the clutches of the rich upper caste landlords and their total dependence on them for seeds to sow in their small pieces of land.

It was also the celebration of empowerment of Dalit women as they went around with the seeds, and women videographers who showed what they had documented to the other villagers.

Meet the women who are now an inspiration to millions of farmers across India.... 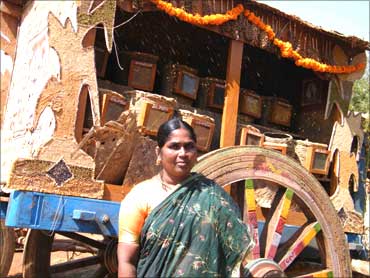 Let us listen to what Saruppamma, a Dalit woman from the Edakulapalli village has to say about her month long journey on her bullock cart to 30 villages.

Saruppamma has two acres of land now and with the earnings from her land, she has married off her two daughters and one son.

There was a time Saruppamma had only one sari. She could not even afford one meal a day. There was no cultivation in her barren land.

Today, she has many saris, two acres of land that gives her enough money to feed her family and buy a flat in the town, and buy insurance policies for the entire family.

Saruppamma talks about her mobile seed bank, "This is the 11th year that I am going around with the seeds we have collected. I have 40 to 45 varieties of seeds and because of my success, other villagers also listen to me. I don't use any hybrid seeds, I don't use any fertilizer or pesticide. I use only panchagavya (low cost organic input for both crops and animals) and that is enough to keep my soil fertile. So, I show my seeds and tell others to use only organic seeds. There was a time hybrid seeds had come here and spoilt our soil. Not any more. I tell the villagers that sowing organic seeds is like praying to Mother Earth. I have seen a lot of change in these many years."

Saruppamma's story is not an isolated case; there are thousands of such Saruppammas in Medak district. 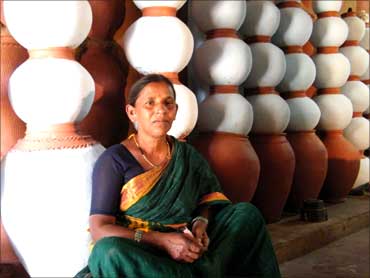 Mollamma was one among the many landless labourers in the Pastapur village who had to go around every morning begging for work.

She and her family ate only if there was work in some village. Otherwise, they slept on an empty stomach.

Today, she is a videographer who has just come back after a month-long journey to 30 villages. Her job is to show how her villagers follow organic farming and the bio-diverse crops they harvest from their lands.

In the villages, she also documents the long discussions the villagers have with the women farmers from her village.

"There was a time people like me were not allowed to go anywhere near the upper caste land owners. Our confidence was so low but from the day I joined the women farmers' sangham, and from the day I was taught to videograph, my life has changed. I was shunned once but today, I am considered an expert. I talk to politicians, I show my films to big people, and I travel by aeroplane. Everybody in my village respects me today, even those who shooed me away when I went begging for work. I can't say how happy I am," she said.

Mollamma, the landless labourer who had not stepped out of her farm, has today travelled all over India, and also neighbouring countries like Sri Lanka, Bangaldesh and Nepal. Today, not only her own people but the landlords are in awe of her.

She also has her own house, one and a half acres of land, and could make enough money to marry off her two daughters. 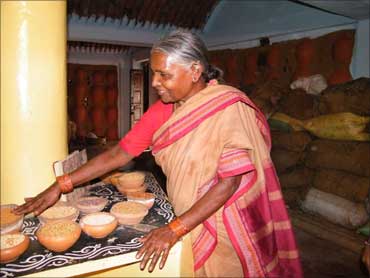 Thirty years ago, Chandramma had just one acre of semi-arid land where she did not cultivate anything. Her life was full of misery, poverty and hunger.

Today, she owns 20 acres of land. She has been buying an acre every year, and cultivating at least 12 varieties of crops in her land.

"Twenty five years ago, I had no money, no food and no clothes to wear. Ever since we started the women's sangham, got the knowledge and money to do organic bio-diversity farming, my life has changed. Today, the land that was once called wasteland, produces fruits, vegetables, pulses, oil and fodder for my cattle. I made Rs 20,000 in the first year of harvest itself."

Chandramma is now a guide, teacher, philosopher and an expert on agriculture. Villagers from 700 kilometeres away come to collect seeds from her. She is so empowered that she has divided her land among her daughters-in-law and not her sons.

She has travelled far and wide so many times that she has the third continuation passport now!

How did such a change come about in some of these tiny villages? How did their barren land produce sack full of grains? How did they gain the confidence to raise their voices?

And then again, if you have not noticed it yet, how is it that only women run these things, in traditionally patriarchal rural India? Image: Chandramma and her family collecting channa from the farm.
Photographs: Shobha Warrier
Empowerment of Dalit women with seeds banks

It all started with the Deccan Development Society (DDS), a non governmental organisation (NGO) visiting the Dalit people in the semi arid belts of Medak district in Andhra Pradesh about 25 years ago.

At that time, most of them were landless peasants, and if at all they had a small piece of land, they had to beg for seeds.

They had also forgotten the age old way of cultivating the semi arid land with intercropping growing many crops placed alternately on the land, at the same time.

DDS initially tried to organise the men folk, providing finance and training to improve their farming practices. But it failed due to poor repayment of loans and low level of development.

It was then that the NGO hit upon the idea of working with the women.

Engendering development was more efficient with them. And nothing succeeds like success. With their unity and the results they got, the women of Medak have led from the front and achieved success.

After helping the women financially to buy seeds and start cultivation initially, DDS advised them to start their own sanghams, and it was at one of the sangham meetings that the women decided to have a common seed bank.

In 1997, the women farmers of 18 villages started their own seed banks with about 10-15 varieties of seeds. They hired from among themselves, a bank keeper to take care of it. From the seed bank, if a farmer borrowed, say a kilogram of seeds, she had to repay two kilos after the harvest. That was the arrangement the sanghams had. In two years' time the number of villages that had seed banks went up from 18 to 55.

If these women were borrowing seeds earlier from landlords, they later got seeds from seeds banks but in the last five years, seed banks have also become redundant and therefore defunct in around 27 villages!

Every woman has become a seed banker, rather they have achieved seed sovereignty.

Today, DDS works with 5000 women farmers and none of their farmers borrow seeds from the seed banks. "Only farmers and NGOs from the nearby regions come and collect seeds from our banks," says Suresh, project director with DDS.

With the number of varieties of seeds going up to 85-90 and women starting seed banks in their villages, DDS found that it was time to spread the message to the nearby villages too.

So they started the mobile seed bank trips where farmers went around the nearby villages in their colourful bullock carts to create awareness. The culmination of the mobile bank's journey is celebrated as the bio-diversity festival now.

More than that, the women farmers of the region took a vow that they would never allow any genetically modified (GM) seed to enter their villages.

They have conducted several meetings in the villages to make all women aware of the impact of GM seeds. 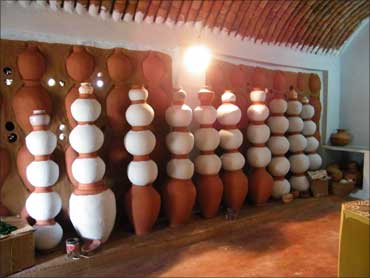 Farming in the semi-arid area

By and large, the farmers in the semi arid areas grow millets and follow organic farming. There is also a traditional sowing pattern that they follow, which helps the soil sustain itself.

So, in one acre of land, they grow 12 different crops, which help the soil from losing its bio-diversity and fertility. While some of them are nitrogen fixing crops, some others like sorghum takes care of the soil fertility.

So, from an acre of land, the farmer gets four bags of sorghum which can feed his family for six months, two bags of pigeon pea which will last for one whole year and a bag of oil seeds like sunflower and linseed.

They keep these for their own yearly needs and sell the rest at the market for their cash needs. The end result is that the once hungry farmers get good food, fodder for their cattle, and also cash for their needs. More than anything, what they follow is eco-friendly agriculture. 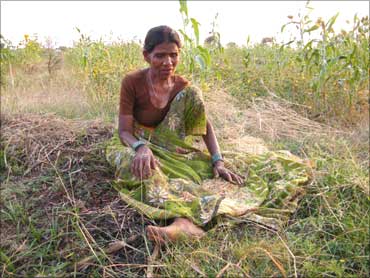 As a member of the Millets Network of India, last year DDS decided to work in Dorli, a village in Vidarbha. Here, not a single villager was spared from the mounting pressure of debt.

There had been so many suicides in the village when the DDS members entered the village.

They started with sorghum cultivation but bad monsoon affected the cultivation and farmers got only fodder.

As they had not bought seeds from anyone, although the crop failed, there was not a single suicide after the harvest, DDS said.

So, DDS plans to work again next year by making the farmers plant sorghum and some other crop to bring biodiversity in the farms in the village.

"We want Dorli to be the future face of Vidarbha; the face of desperation will change to a face of hope for Dorli farmers," says P V Satheesh, director, DDS. Rain-fed agriculture contributes 44 per cent of the total food grain production of India, and produces 75 per cent of pulses and more than 90 per cent of sorghum, millet and groundnut from arid and semi-arid regions.