Sign in  |  Create a Rediffmail account
Rediff.com  » Business » The man with a unique taste for Indian wine 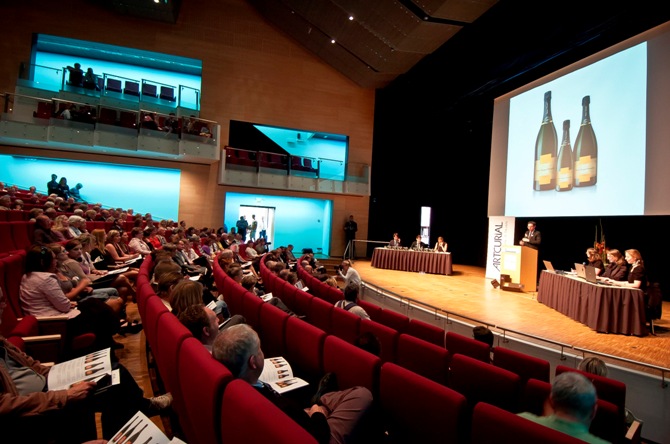 Image: Participants attend an auction for eleven bottles of champagne from the early part of the 19th century, which were found in a shipwreck discovered in the archipelago of Aland Islands, in Mariehamn.
Photographs: Augusto Mendes/Lehtikuva/Reuters Reghu Balakrishnan in Mumbai 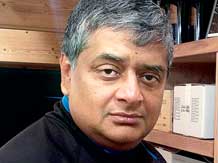 Just a couple of years ago, Ravi Viswanathan (left) made headlines when he bought a 170-year-old Veuve Clicquot champagne for euro 30,000 (Rs 19 lakh) as a wedding anniversary gift for his wife.

The champagne was part of a collection of 145 wine bottles found in a shipwreck in the Baltic Sea.

Viswanathan, a low-profile investor based in Singapore, can afford such little luxuries of life.

For, he is on his way to becoming the largest individual stakeholder in the Indian wine industry after he closes his acquisition of 30 per cent stake in Sula Vineyards along with the Anil Ambani-owned Reliance Capital. 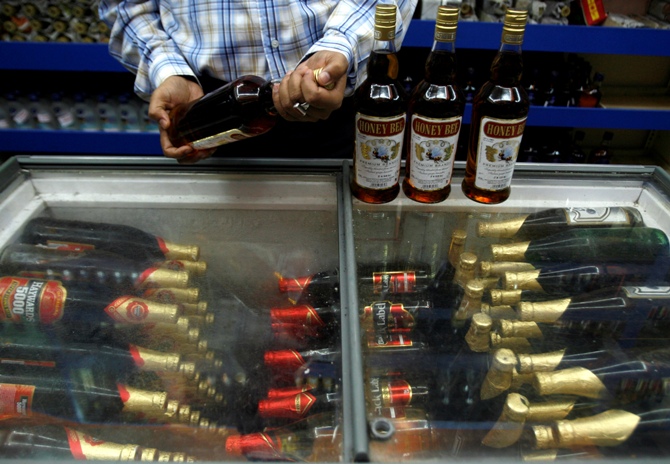 “With Reliance we will together own about 30 per cent of Sula.

“The exact split is not decided yet,” Viswanathan, a French citizen and a permanent resident of Singapore, told Business Standard in a rare media interaction.

He will co-invest in Sula through Visvires Indian Wineries Pvt Ltd, a Singaporean company run by Visvires Capital.

“We see great potential in the Indian middle class consumption theme which includes wines and other activities. In the wine segment we expect to see in the next decade or so the same explosive growth as China experienced 15-20 years ago,” Viswanathan says. 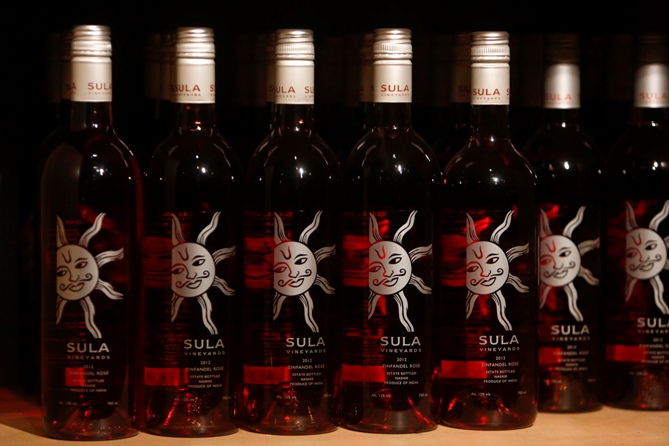 However, people familiar with the development believe that Viswanathan will buy about 11 per cent stake while Reliance will buy 19 per cent stake of the total 30 per cent held by Everstone Capital in Sula.

“Visvires Indian Wineries is a new vehicle we have set up for this particular business. In the near future our stake in Grover Zampa will also be transferred to the same entity,” he said.

After the deal, Sula founder Rajeev Samant and his family will remain the largest shareholders with 45 per cent stake.

Verlinvest, a Belgian family-owned investment holding company that mostly invests in family businesses, will remain invested with its 25 per cent stake. 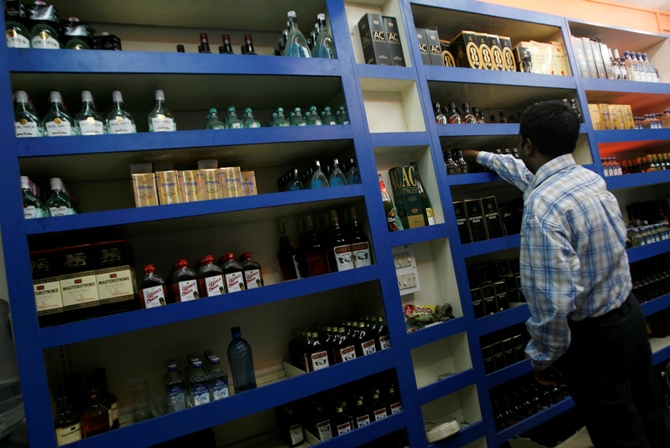 Image: A man checks out an alcohol bottle inside a wine shop.
Photographs: Rupak De Chowdhuri/Reuters

In 2012, Viswanathan and a few others set up Visvires Capital Asia, a private equity fund management company, where he has since been the chief executive.

“Though my family is from Pondicherry, I have been raised in France.

“So, wine came naturally [to us] and some of my partners in Visvires come from families in the wine [growing regions] and Champagne,” Viswanathan said.

Besides investing in India’s two largest wine makers, he plans to expand his restaurant business in Singapore.

It boasts a collection of 20 bottles of the world’s rarest vintage wines and, added to that, a few from the 145 found in the shipwreck. 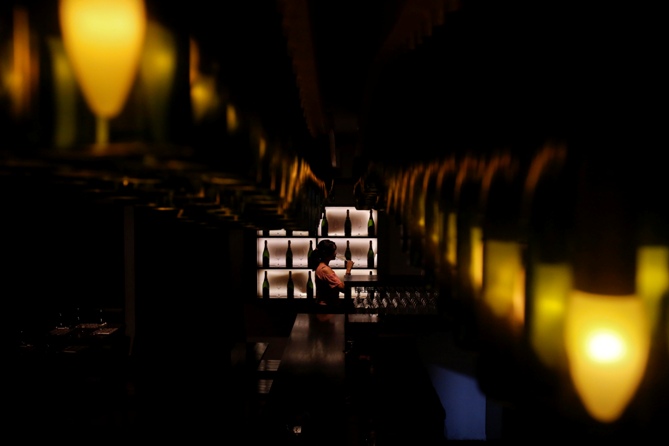 Image: A woman poses with a glass of wine at a wine and tapas bar in Mumbai.
Photographs: Vivek Prakash/Reuters

“We will soon open another restaurant by June for modern Indian cuisine in co-operation with Abhijit Saha from Bengaluru.

“The restaurant will be named Saha. It is likely to become one of the premier restaurants for Indian cuisine in Singapore and probably the first one with such a focus on southern cuisine,” Viswanathan said.

In 2012, when Grover Vineyards and Valle de Vin were merged to create India’s second largest wine company, Viswanathan had taken 18 per cent with Reliance Capital.

A group of investors, including the two, together hold 49 per cent in Grover Zampa. 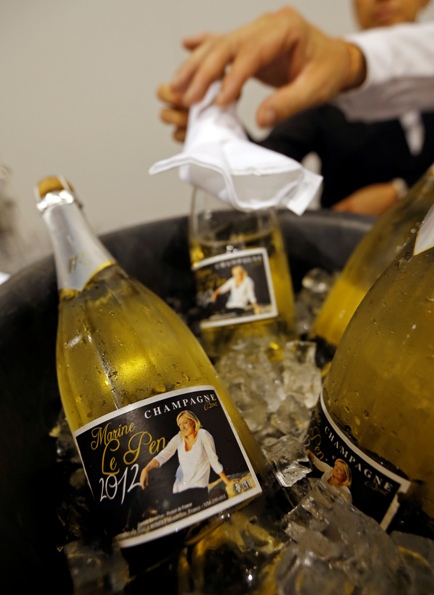 “The winners (Sula and Grover) have extended their lead and market share and have seen good increases in volumes and values.

“There is anecdotal evidence that wine is becoming more common in metros at events such as weddings or parties and consumption is starting to reach the tier-II and -III cities,” Viswanathan said. 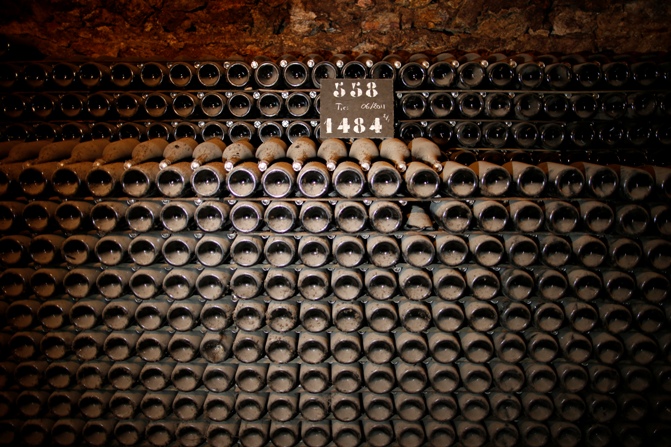 Viswanathan has plans for more investments in India.

“We are in advanced stages of discussion on a few more Indian investments and also in the global ultra-luxury sector. Middle-class consumption in emerging markets is a core investment theme of ours,” he said.