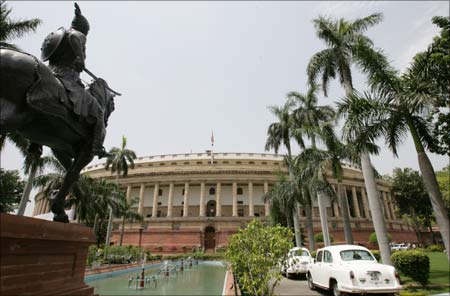 It has now been a month since Pranab Mukherjee resigned as finance minister in order to become the ruling United Progressive Alliance's candidate for president.

At the time, this newspaper had cautioned against over-reaction: it did not seem likely that Mr Mukherjee's departure would necessarily cause a sudden breakout of active reform all over North Block.

Now that President Mukherjee has moved into Rashtrapati Bhavan, and Prime Minister Manmohan Singh has been in charge of the finance ministry for a month, it might be worthwhile to examine what exactly has been done. 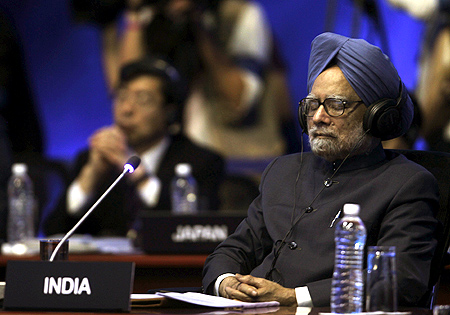 Image: Prime Minister Manmohan Singh waits for the beginning of the first session of the G20 Summit in Los Cabos.
Photographs: Edgard Garrido/Reuters

And the answer is, as feared: not very much.

True, some of the gloomy atmosphere has been lifted.

The prime minister has been careful to say the right things about foreign investment and animal spirits; some of the more controversial aspects of the Mukherjee era are being given a high-profile review.

The General Anti-Avoidance Rules or GAAR, for example, will be gone into in greater detail by a committee chaired by Parthasarathi Shome of Icrier.

This sort of transparency might help reassure some investors. Yet there has been little movement on the other essential fronts. 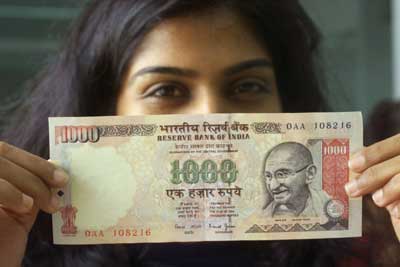 Changes to the implementation of infrastructure projects, for example, continue to focus on new projects -- with the announcement of a government body in charge of getting clearances for larger projects -- while many older projects continue to languish, which does not bode well for a quick growth turnaround.

Solving the problem of limited gas and coal supply continues to be held hostage by confrontation with the private sector in the case of gas, and by an inability to push Coal India towards efficiency in the second.

No game-changing reform like breaking Coal India's monopoly has even been broached as an idea. 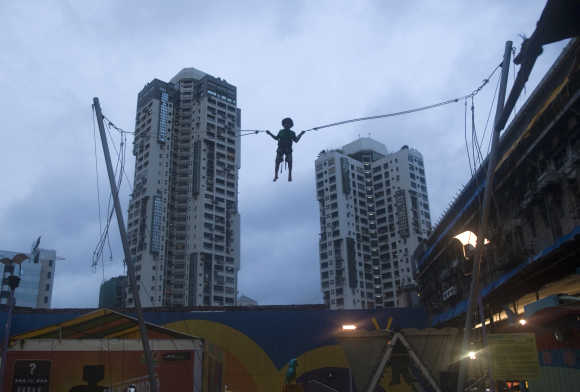 Image: A boy plays on a trampoline at a mall in Mumbai.
Photographs: Ahmad Masood/Reuters

Nor has Mr Mukherjee's departure from the finance ministry made it more likely that states will sign up to the goods and services tax agreement any time soon.

If Dr Singh had pushed his ministry into beginning the legislative process, it would have counted as a positive step; these things have a momentum of their own.

This has not happened either.

The last straw, perhaps, will be the continuing delay in the most urgent of reforms: reducing the subsidy on diesel.

The Budget for this year provided only Rs 40,000 crore (Rs 400 billion) for fuel subsidies. 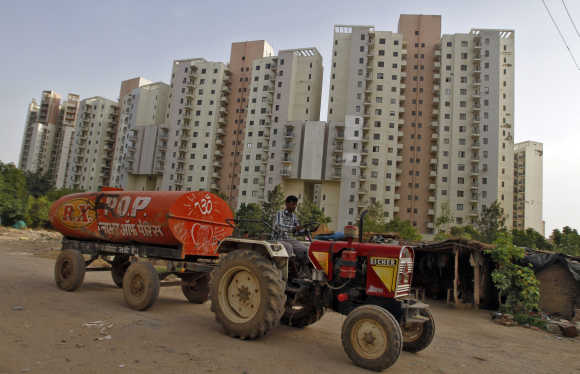 That amount has likely been used up already. Unless the subsidy bill on diesel and liquefied petroleum gas for domestic use is drastically reduced, the government's Budget mathematics will fall by the wayside and it will suffer a further crisis of credibility.

Surely Dr Singh and the United Progressive Alliance's economic team realise that this is not the time for any externally vulnerable economy to appear to have a government without credibility.

When the PM took over the FM's job, there was an unquestionable feeling of relief. It appears now that this was unjustified; the paralysis of the UPA might be a problem of structure, not of individuals.

Euphoria is fleeting, and it has fled.

The task before the UPA and the prime minister is to act before all credibility does, too.