Beginning of the end of India's mainstream media? 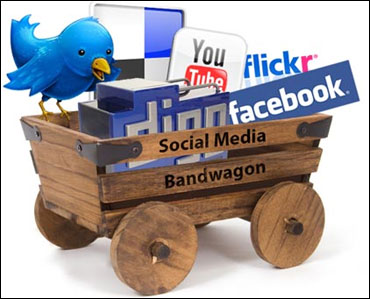 M R Venkatesh
From politics to economics, from cinema to sports, to arts to culture, social media has a view on everything.

They swarm the Internet like locusts. They hunt in packs like wolves. They strip you to bare bones within minutes like a school of Piranhas. They are knowledgeable. They are incisive. They are humorous. They tolerate no nonsense. They are impatient. They care too little for your reputation. They are unconventional. Yet, they are "in thing."

From politics to economics, from cinema to sports, to arts to culture, they have a view on everything. They discuss, debate, and digress amongst themselves, openly and fearlessly. Love them or hate them, the fact is you cannot ignore them. One has to concede they have come to occupy the national central stage of debating, opinion making and critiquing.

"They" refers to users of social media - from Facebook to Twitter. They are in mid-twenties to their mid-forties, each one connected to digital world by a mobile device. That makes their response instantaneous, spontaneous and probably a bit mischievous.

This is where the mainstream media (MSM), especially electronic media, seems to have implicitly lost its plot. "When asked to bend, they crawled." That is how senior Bharatiya Janata Party leader L K Advani described the behaviour of our media during Emergency. That is perfectly understandable if not wholly acceptable.

Four decades later when the roots of democracy are well entrenched in the country, the behaviour of significant sections of our media has changed considerably. Now no one asks them to bend - they crawl without anyone prompting them. And therein lies the rub.

Media is often referred to as fourth pillar in the functioning of a democracy. Unfortunately, (especially English media - both print and electronic) media in India is more often than not seen as a cheerleader of the ruling establishment (of any political hue) than a conscience keeper of the nation.

It may not be out of place to mention that the vernacular press who pontificate less are seen more honest, freer and independent. Remember, with substantial commercial interest most media houses are in effect business houses. And when commercial interests are involved, several issues take a back seat.

Moreover even to this day, media depends heavily on the government for its day to day functioning. Government advertisement forms substantial part of its revenue as government patronage is important for its circulation or viewership. Several media houses are alleged to have violated some of the laws of the land. To that extent their independence is compromised.

That explains substantially if not wholly why media in India never puts government to greater scrutiny as it should in any democracy. This degeneration of the MSM - especially English news channels and print media as the cheerleader of the ruling establishment - is perhaps the most negative development in our democracy in the past decade or so.

Consequently, there is a huge vacuum in the functioning of our democracy. And every student of physics will tell you, nature abhors vacuums. As traditional media abdicates its space, India is witnessing emergence of social media as the new conscience keeper of  our nation.

By being a handmaiden of the establishment since independence, the former has lost its charm long before emergency. By crawling when merely asked to bend, it lost its credibility and legitimacy during emergency. With the rise of social media, it now runs the risk of losing its relevance.

You scratch my back - I will scratch yours

It was not long ago - perhaps less than a decade when we had several of these electronic media than began to question aggressively and debate extensively. It was like a breath of fresh air. The commitment of their editors was palpable. The audience was hooked. Newer anchors, better presentation and latest technology combined to make these channels popular.

But it faded away far too quickly. Unfortunately, their popularity turned out to be their Achilles heel. As the electronic media grew popular, government ensured that they fell in place far too quickly than one realised. In a popular chat show at 9 PM, I as a panelist was witness to a senior Congress leader taking on an aggressive anchor by literally threatening even when live on air. And the tiger that roared till then, would not even purr to such open intimidation.

What is most irritating is that these English Channels have a limited set of panelists, mostly aged and semi-retired editors of the print media - who profess the same pro-establishment view. What is galling is that some of them on a few occasions have ended in two or three different channels on the same subject everyday.

As a quid pro quo for being invited by the electronic media, editors of print media in turn get invited to write special columns in the print media. Well you scratch my back and I will scratch yours.

Crucially, in defending the ruling establishment both do a better job than the ruling party spokespersons. Rumour has it that most of them are angling for a berth in Rajya Sabha (or government patronage) and hence do not see any merit in being even remotely independent. In short, media and that too prime time, is reduced to a vehicle for personal agenda.

Consequently, the debating space is now tightly controlled by a group that owes its allegiance only to the government of the day. That, in effect, means that media is controlled by government (without getting maligned).

The rise of social media

The net impact - media is reduced to a farce. Having participated in a few, I am witness to these charades. At the end of all this, one is left with a bad taste in the mouth nothing else. It may not be out of place to mention that even rigged casinos fare far better.

Similarly, the show of neutrality by the MSM does not impress most in the social media.  Those who lampooned the pre-liberalisation era Doordarshan now believe that private channels are its crass version.

This failure of the MSM to be independent and investigative was evident during the 2G scam. Careful not to offend the ruling establishment, many within the MSM did everything to ensure that they did not concentrate on the same till fall of 2010 when the CAG report and subsequent events compelled them to do so.

And whenever media has been able to uncover some - as it did in case of CWG for instance - it was more a case of being a part of some corporate war than genuine media expose. Remember - media's business is only business and nothing else matters. Given this abysmal levels of professionalism, the trust deficit between the ordinary Indian and MSM is increasing by the day.

Recall that sections of the very same MSM that valiantly uncovered the Bofors scam and others a few decades ago are reduced to merely reporting non-events as they unfolded than doing original investigations.

In fact, investigative journalism is now well and truly dead barring honourable exceptions. In its stead we have only journalism that amuses at best, titillates at worst.  As someone wryly commented - Indian journalism is reduced to 'by page three, for page three and of page three'. Importantly, when have last heard of an editorial that has shaken the government?

In contrast, the social media is a heady cocktail - an impatient audience with a medium that allows absolute freedom of expression. In the process reputations so assiduously built over decades are demolished instantly in tweet or a status update.

There is something more interesting. Social media has even been accused of being communal. Ever since Ms Sagarika Ghosh coined the term "Internet Hindus," the theater of debate seems to have shifted to a different plane.

But to me this is smaller order of the smalls - a strategy devised by MSM to deflect criticism. The collapse of the traditional media and its abdication is singularly the most negative development of the past decade. Now having abdicated its role, MSM now laments, lampoons social media! In the process it forgets that you cannot have the cake and eat it too.

The failure of our media to have an effective ombudsman or a self-regulatory mechanism has robbed it of its legitimacy. Consequently, its accusation of the social media being shrill and abusive cuts no ice. The advent of social media has made it less relevant. Its continued refusal to introspect makes it a reckless wonder.

Whatever be it, the time for our MSM to introspect is NOW.

The author is a Chennai-based Chartered Accountant. Views expressed here are his own. He can be contacted at mrv@mrv.net.in
Tags: MSM , India , CWG , CAG , L K Advani
Print this
article
ALSO
READ