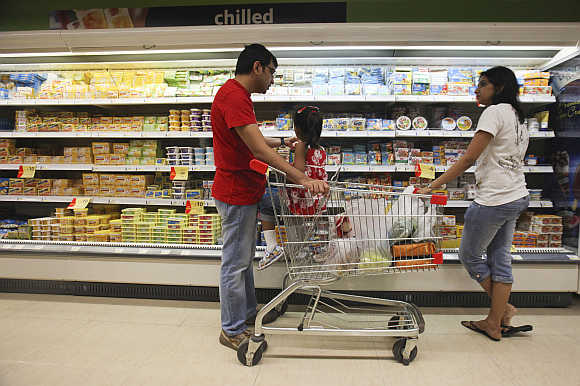 Reliance Industries Ltd, the country's highest valued company, is on the way to becoming the number one retailer in India, seven years after it diversified into this sector from its mainstay of refining and the petrochemicals business. This evening, it announced Rs 10,800 crore revenue by its retail arm for the year ending March 31, a 42 per cent growth. 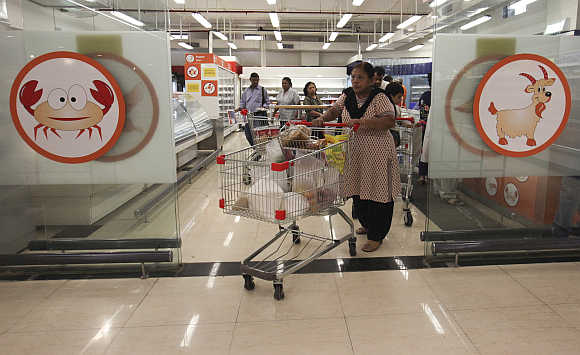 Image: A woman pushes a trolley as she exits the meats section of a Reliance Fresh supermarket in Mumbai.
Photographs: Danish Siddiqui/Reuters

Analysts' estimate 15 per cent of this or about Rs 1,980 crore (Rs 19.8 billion) came from the apparel and fashion business that has been recently sold to Aditya Birla Nuvo. The company has since been rechristened Future Retail and its financial results for the quarter ending March is awaited.

If one deducts the revenue of the sold business, the anualised revenue for Future Retail would come to Rs 11,209 crore (Rs 112.09 billion).

"Future Retail's financial figures without the sold Pantaloon format is still awaited," says Dhvani Modi, analyst with domestic brokerage ICICI Direct. "However, as per the latest numbers of Reliance Retail, it has come in neck to neck competition with Future Retail in terms of turnover." 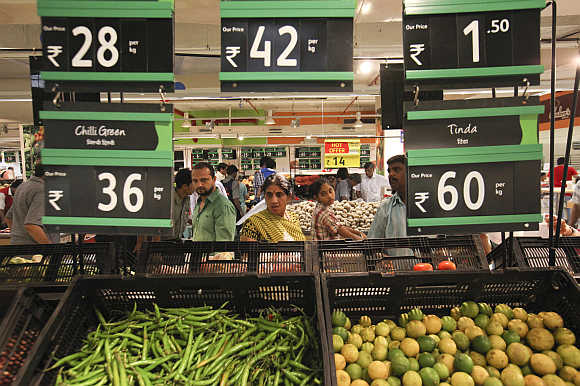 Image: Prices for various vegetables are displayed as people shop in the fresh foods section of a Reliance Fresh supermarket in Mumbai.
Photographs: Danish Siddiqui/Reuters

Future Retail executives were not available for comment. A mail sent did not get any response. The importance of the retail arm has risen in importance, given RIL's challenges in the petroleum exploration business, with depleting gas levels at its KG-D6 basin.

The company has cash equivalents of Rs 82,975 crore (Rs 829.75 billion) in its books, which need to be deployed for better return on capital.

"It (petro exploration) is one business which is dragging on Reliance Industries for many years," says A K Prabhakar, senior vice- president, equity research, Anand Rathi Financial Services.

"So, they are heavily banking on retail and telecom and I think next year onwards, these will start making profits." 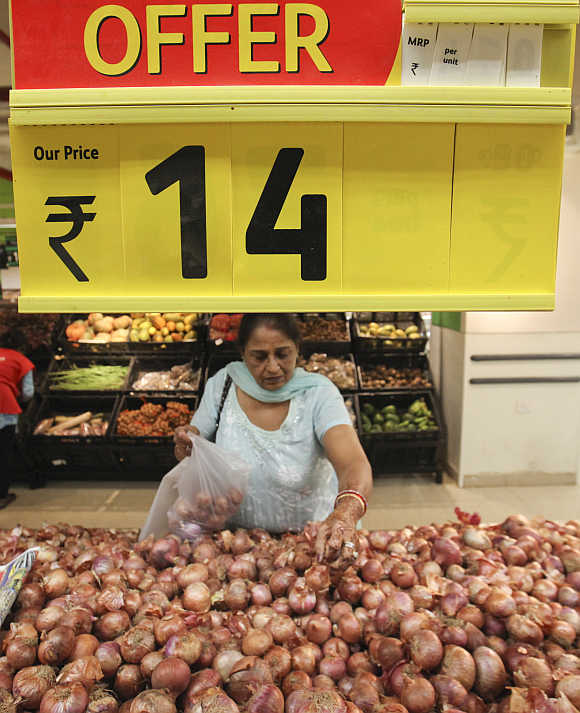 Image: A woman selects onions in the fresh foods section of a Reliance Fresh supermarket in Mumbai.
Photographs: Danish Siddiqui/Reuters

Reliance Retail faltered initially on a plan to set up 4,000 stores by 2010. In the five years since it started operations in 2006, it could manage to set up just 1,300 stores. Its much- hyped 'farm to fork' strategy wouldn't take off, following opposition in many states, dashing Ambani's high hopes.

In 2008-09, Reliance Retail had to shut 50 shops, downsize its employee strength by a little over 1,000 and exit two formats - Reliance Kitchen, which sold modular kitchen furniture, and Reliance Wellness, a beauty and lifestyle chain.