Image: Trade is a smart way to improve the trust deficit between India and Pakistan.
Photographs: Reuters Nayanima Basu at Attari border

His visit is an extremely important one for a number of reasons.

Trade is a smart way to improve the trust deficit between India and Pakistan.

Business ties work to strengthen bonds across borders and realising this, both countries are also pushing for a much liberalised visa regime for businessfolk.

In April this year, commerce secretaries of both countries came out with a zealous joint statement post their meeting in Islamabad.

Hopes of a renewed and more vibrant trading relationship seemed to get a fresh lease of life.

Both ministers planned to increase trading hours, facilitate faster clearance of cargo and expedite the movement of large vehicles and containers.

All of that risks being reduced to just hot air.

The main crux of the joint-statement was increasing trade through the Wagah-Attari land route especially via a newly built second gate dedicated to passenger and freight traffic.

As per the communique, the new integrated check post, which had been under construction since February 2010 under the aegis of the Ministry of Home Affairs, would become fully operational from October 1.

Yet, nothing seems to have progressed on the ground and all evidence points to a stagnation of these plans which could derail prospects of rapprochement between the two countries. Image: Trade between India and Pakistan has healthy prospects.
Photographs: Reuters
Firstly, while the construction - overseen by RITES - is in full swing, delay in the disbursement of funds by the MHA has taken the sheen off the project, officials told Business Standard, and forced a delay of at least two to three months.

So far, only the ground floor of the passenger terminal had been constructed along with three warehouses and special centres for pilgrims.

The ground reality is that the new ICP, which is spread over 125 acres, is far from becoming operational anytime soon.

Trade between India and Pakistan, while not huge, has healthy prospects as traders, businesses and even people from both countries are eager to access each other's goods as well as markets, which range from cosmetics to cement.

For Pakistani businesses, like say FMCG companies, the route could prove to be a significant money saver as it no longer means bringing in far more expensive raw ingredients for face creams and cosmetics from the United Kingdom, for example, or even Indian goods via Dubai (which is the alternative route used to beat the ban on certain Indian goods).

It's not that Indo-Pak trade through the border posts are non-existent. 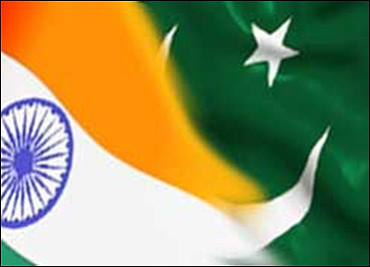 But those numbers could get much higher with the new and smoothly functioning ICP.

Reason is that the ICP is expected to do away with the existing entry and exit points that face huge traffic delays and chaotic jams.

Presently, trucks are allowed to ply only till 2-3pm everyday and the average stoppage time of each of the trucks is around two hours.

This is because of the regular parade exercise involving a high-stepping face-off between Indian and Pakistani soldiers cheered on by jingoistic crowds that takes place near the existing gate which leads to closure of traffic for the day after 3pm.

The new ICP is expected to have specific platforms where goods would be unloaded in an organised way, but none exist so far. 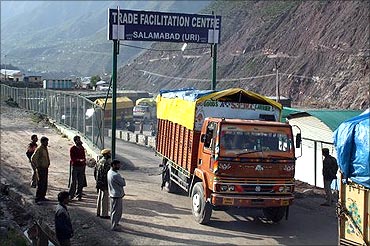 One of the biggest stumbling blocks that have emerged is the absence of a parallel road on the Pakistan side in order to the make the new gate viable.

As a result, when the new ICP becomes operational, instead of going straight from the new Gate Number 2 into Pakistan, passengers would have to travel around 1.5 km more to arrive.

Similarly, trucks would also need to travel an extra 1.8 km.

The Indian side is building a straight road on the international border from the ICP to Pakistan, but since the latter is yet to build a connecting road the ICP will essentially serve as a big parking lot for passengers and traffic.

"Until and unless the straight road from India to Pakistan's border is opened, this ICP is useless for us. Yes, we might get a more spacious area to rest while we unload the trucks but nothing more than that. Delays would continue to take place," said Rayeez Khan while smoking a Gold Flake cigarette. Image: There is an absence of a parallel road on the Pakistan side.
Photographs: Reuters
Khan is a Pakistani truck driver who brings stones from the Jhelum River five to six times a month.

That's not all. The government has also moved at a glacial pace in granting essential permissions needed to make Gate Number 2 operational.

The Border Security Force that has a watch-tower near the gate, the forest department which needs to remove trees and Punjab State Electricity Board which needs to bring connectivity up to the ICP - which inturn needs permission from the National Highway Authority of India since the wiring takes place along the main highway - all need to sign off on the project.

But the applications with them are still pending, suggesting a business-as-usual attitude.

But in a recent meeting the MHA has decided to ask Punjab Tourism Corporation to provide vehicles. 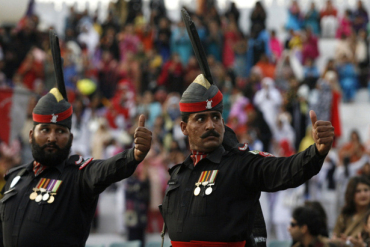 Image: Both countries need to speed things up at the border.
Photographs: Reuters

This is the same MHA that had decided to establish a body under the ministry called the Land and Port Authority of India to monitor the functioning, development and maintenance of the ICP.

However, this too has become mired in red tape, and the government is in the process of electing a chairman and members, which might take another two months.

Perhaps the one thing most emblematic of the project and relations between the countries is the state of the passenger terminal.

This was initially planned to represent state-of- the-art architecture with central air-conditioning and all kinds of modern facilities.

However, what has been built is a huge structure with an over-arching dome with white-ceiling fans and cramped immigration counters, suggesting that while the rest of India booms, this is one endeavour that is most resistant to change.