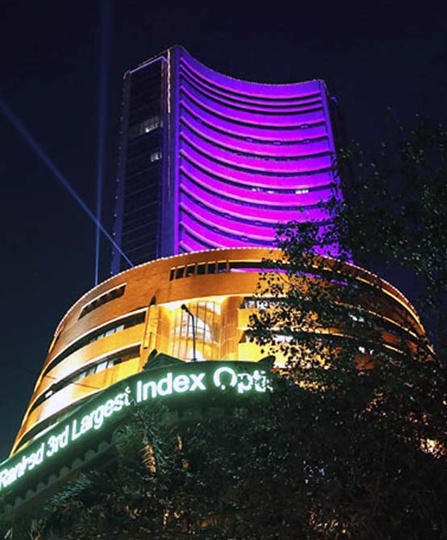 The market breadth in BSE ended positive with 1,920 shares advancing and 1,092 shares declining.

The BSE benchmark Sensex on Tuesday jumped by nearly 174 points to end the day at all-time closing high of 24,858.59 as sentiment remained positive after the Reserve Bank of India pleased markets by unlocking about Rs 40,000 crore (Rs 400 billion) of banking funds by cutting the statutory liquidity ratio (SLR).

The broader markets performed well in line with the benchmark indices- BSE Midcap and Smallcap indices ended higher by nearly 1%.

The market breadth in BSE ended positive with 1,920 shares advancing and 1,092 shares declining.

The Reserve Bank of India (RBI) in the bi-monthly monetary policy review today kept the repo rate unchanged at 8% as per the street's expectations. The Cash Reserve Ratio (CRR) was also unchanged at 4% of net demand and time liabilities (NDTL).

However, the Statutory Liquidity Ratio (SLR) was reduced by 50 basis points to 22.5% of banks NDTL with effect from the fortnight beginning June 14. Besides, RBI also reduced the liquidity provided under the export credit refinance (ECR) facility from 50% of eligible export credit outstanding to 32% with immediate effect. The SLR cut will be effective June 14.

RBI also introduced a special term repo facility of 0.25% of NDTL to compensate fully for the reduction in access to liquidity under the ECR. RBI shall also continue to provide liquidity under 7-day and 14-day term repos of up to 0.75% of NDTL of the banking system.

According to Navneet Daga, Derivative Analyst, KR Choksey Securities, “Well after the sharp rally on Nifty, some call OI shed is visible on 7300-7400 range, with now writing visible at 7500 zone, nifty likely to touch and surpass the levels of 7500 this expiry. Buying on dips with stop loss placed at 7200 zone is recommended.”

Asian shares rode higher on Tuesday, supported by solid US and Chinese data, while the euro dragged its feet near a 3 1/2-month low on expectations of fresh monetary easing by the European Central Bank.

Back home, the Reserve Bank of India was spotted buying dollars via state-run banks starting around 59.16, two traders said.

Foreign institutional investors (FIIs) bought shares worth a net Rs 234.49 crore on Monday, as per provisional data from the stock exchanges.

On the sectoral front, BSE Metal index surged by over 5% followed by counters like Realty, Capital Goods, Oil & Gas and Consumer Durables, all gaining between 1-3%. However, BSE FMCG and Healthcare indices declined by nearly 1%.

Metal stocks zoomed on the back of positive manufacturing data in China, the world's biggest consumer and producer of the metal. Coal India, Sesa Sterlite, Tata Steel surged between 5-7%. CNX Metal index recorded highest closing ever since Feb 12, 2014.

The banking ended marginally negative after witnessing choppy trend after the Reserve Bank of India left the key interest rate unchanged in its monetary policy review.

Sugar stocks surged on hopes that the Modi-led government would help revive the industry by encouraging ethanol blending in petrol and also hike import duty on the commodity to support local prices.

Zee Entertainment has surged 2% to Rs 271 after RBI permitted investment by foreign institutional investors in the media and Entertainment Company up to 100%. Earlier investment limit for FIIs in the company was 49%.