Sign in  |  Create a Rediffmail account
Rediff.com  » Business » Of MPs, fudged expenses and what India spends on them 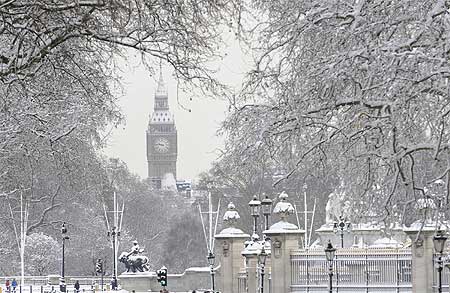 Dawn was breaking over the Palace of Westminster, Britain's Houses of Parliament, as tired MPs and journalists waited in the taxi queue in the great courtyard after an all-night debate on the Race Relations Bill some 30 years ago.

To quicken things and save cost, the janitor bellowed out each destination so that others going the same way could share a cab.

Came my turn and I said "Frognal, Hampstead", which was loudly repeated. Several MPs - led by Teddy Taylor, a churchgoing Scots Tory who rose to ministerial rank - at once exclaimed in outrage, "Can't afford to stay in Hampstead on an MP's salary!" 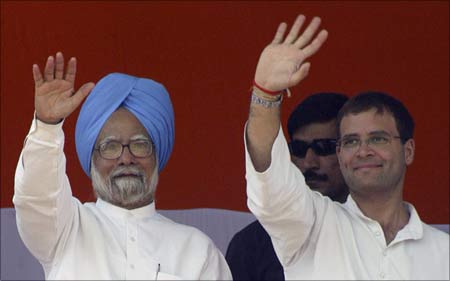 Pleading poverty is second nature for politicians the world over. So is the affectation of sacrificing personal interest for the country's sake. Our new lot of 534 MPs will undoubtedly voice the same complaints.

Many are hardened veterans of previous Lok Sabhas. Some were ministers with a dubious reputation, explaining Manmohan Singh's justified qualms about ministry-making.

They all know, as Atal Bihari Vajpayee affirmed in the innocence of his salad days, that every legislator starts his career with the lie of a false election return. 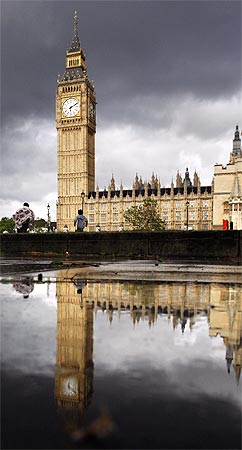 Image: Britain's Houses of Parliament and Big Ben clock tower are reflected in a puddle
Photographs: Luke MacGregor/Reuters
British MPs may not need to fudge poll expenses but the current scandalous exposures show how good they are at fudging other things.

Apparently, when they demanded higher salaries under Tony Blair, they were quietly advised to make it up in expenses instead. A pay rise would raise a stink in the media whereas inflated expenses could slip through unnoticed.

The Blairs, husband and wife, seem to have been pretty generous to themselves. Now, one MP has been caught stinging taxpayers for 16 bedsheets in seven weeks while another gave himself 13,000 pounds as interest for a non-existent mortgage.

Eyebrows are raised at Gordon Brown's payment of 6,500 pounds to his brother for a shared cleaner. Image: Italian businessman Ottavio Quattrocchi (L) is offered a drink by Italian consul Claudio Miscia duri
Photographs: Blas Martinez/Reuters
The difference with India is in detail. We wax indignant over sensational exposures involving Sukh Ram or Ottavio Quattrocchi but ignore abuses that have become the norm and exert a direct and damaging impact on everyday life.

The nearly Rs 855 crore (Rs 8.55 billion) that our MPs cost the country is only the official expenditure, leaving out plums and pickings like cylinder gas and telephone connections, subletting official quarters, charging fees for recommendations (for college admission, jobs or subsidised accommodation), and pocketing payment for asking questions in Parliament. 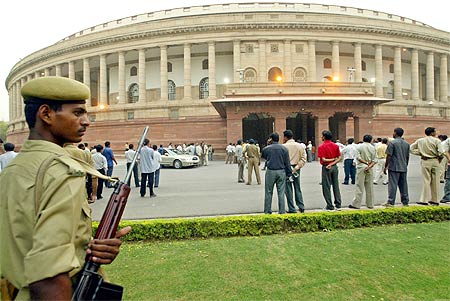 Image: Indian Parliament
Photographs: B Mathur/Reuters
The handsome Member of Parliament Local Area Development Scheme seems inviolable. But when he was West Bengal's vigilance commissioner after retiring as foreign secretary, Subimal Dutt of the ICS described how even a small and simple charge like the Vivekananda Bridge's toll fees were stolen.

He lamented that the ingenuity needed for the operation was not put to constructive use. Dutt's report used the phrase "speed money" which, he said, had become a way of life.

I don't suppose even our most enterprising entrepreneurs could have made their fortunes without courting key politicians.

Globalisation has increased the scope for lucrative politics. Indigenous business houses, multinationals and even foreign governments need friends in high places. A word in the right quarter makes all the difference. 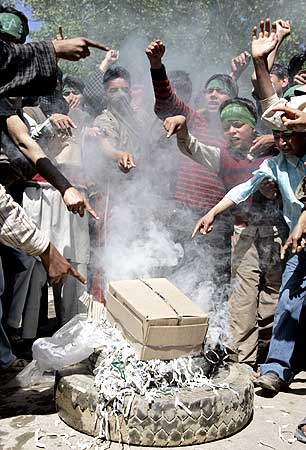 Image: Kashmiri protesters demonstrate against fifth phase of the general election in Bomai, near Srinagar
Photographs: Fayaz Kabli / Reuters
We should thank our stars that 964 candidates with a criminal background lost the recent general election. But the number of similarly tainted -- only it isn't regarded as a taint any longer -- MPs has gone up from 128 to 150. I am told that some of the "crimes" are of a technical nature but 72 new MPs, against 55 in the 14th Lok Sabha, boast serious criminal records.

That is why I wish India had someone like my old friend, Andrew Roth, an American journalist who did a stint on the Hindu and settled down in London. His definitive Parliamentary Profiles, a modest publication of cyclostyled pages, set the cat among Britain's parliamentary pigeons in the sixties with details of earnings MPs did not divulge, like a prominent trade unionist's East European payments.

I don't know if Andrew is still living he must be 90 if he is but his work was special because he didn't take sides. Unlike many Indian investigative journalists, he didn't have an axe to grind. But media exposure is only the start. If the Daily Telegraph's revelations about British MPs are effective, it will be because Britain's law enforcement machinery is still impartial and speedy and politics is still transparent.

Those in turn reflect public demands and expectations. Ultimately, it's up to us to ensure that instead of sinking into sleaze, the new Lok Sabha emerges as the watchdog of good governance.