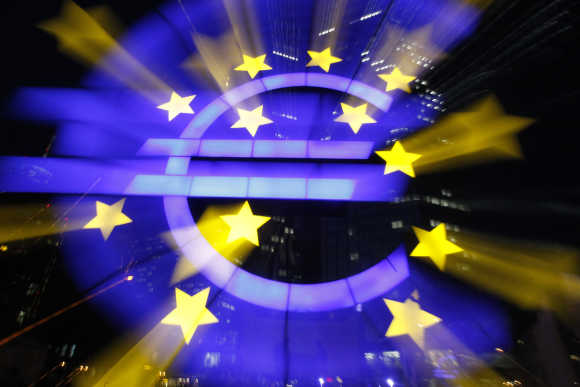 Image: The half-life of solutions to Europe's debt problem is getting ever shorter.
Photographs: Alex Domanski/Reuters Satyajit Das

The half-life of solutions to Europe's debt problem is getting ever shorter. Recent hopes have relied on the ostensible success of the European Central Bank's LTRO - Long Term Refinancing Operation, more appropriately termed the Lourdes Treatment and Resuscitation Option.

In December 2011 and February 2012, the ECB offered unlimited financing to European banks at one per cent for three years, replacing a previous 13-month programme.

Banks drew over euro 1 trillion under the facility - euro 489 billion in the first round and euro 529.5 billion in the second. The funds borrowed were used to purchase government bonds, retire or repay existing more expensive borrowings and surplus funds were redeposited with the ECB.

The first entailed banks borrowing at one per cent purchasing higher yielding sovereign debt, such as Spanish and Italian bonds that paid five to six per cent. The LTRO provided finance for both beleaguered sovereigns and banks, which need to raise around euro 1.9 trillion in 2012.

It helped reduce interest rates for countries like Spain and Italy. It also helped banks covertly build up capital, with the profits earned through the spread between the cost of ECB borrowings and the return available on sovereign bonds. 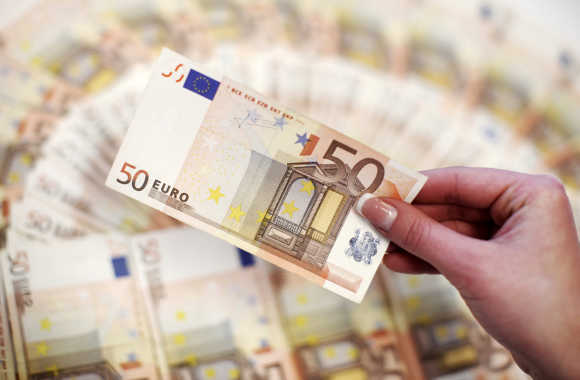 The sheer weight of money - at one euro 500 note per second it would take 63 and a half years to count to euro 1 trillion - proved successful. Financial market sentiment was overwhelmingly positive, feeding a large rally in global stock markets and other risky assets.

However, as subsequent events exposed, there were always reasons to be cautious. The LTRO facility is for three years. It assumes that the conditions will normalise within that period.

Economist Walter Bagehot advised that in a crisis, central banks should lend freely but at a penalty rate and secured by good collateral. The ECB does not appear to have quite understood Bagehot's commandment. The rate is below market rates, amounting to a subsidy to banks.

The ECB and euro zone central banks have loosened standards, agreeing to lend against all manner of collateral. In effect, the ECB is now functioning as a financial institution, assuming significant credit and interest rate risks on its loans.

The ECB balance sheet is now around euro 3 trillion, an increase of about 30 per cent just since Mario Draghi took office in November 2012.

It is supported by it own capital (scheduled to increase to euro 10 billion) and the capital of euro-zone central banks (euro 80 billion). This equates to a leverage of around 38 times. 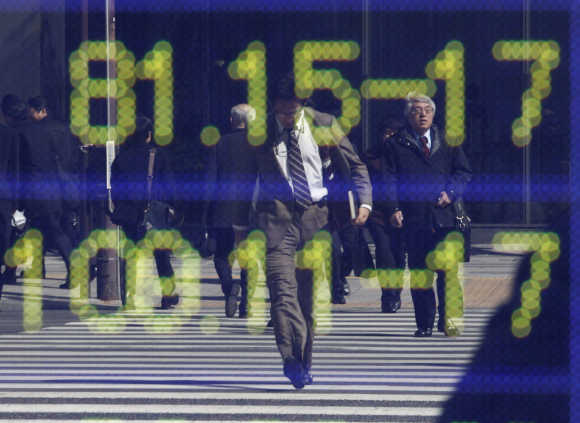 Critically, the LTRO cannot address fundamental issues. It does not reduce the level of debt in problem countries, merely finances them in the short run. Europe is relying on its austerity programme to reduce debt.

As Greece demonstrated and Ireland, Portugal, Spain and Italy are demonstrating, massive fiscal tightening when combined with private sector reduction in debt merely puts the economy into recession.

The LTRO does not improve the cost or availability of funding for the relevant countries. Government bond purchases financed by the LTRO artificially decreased the interest rates for countries, such as Spain and Italy.

Unless additional rounds of LTRO are offered, interest rates are likely to return to market levels. The real increase in liquidity available to support sovereign borrowings was lower than euro 1 trillion, with perhaps only one-third directed to this purpose.

Banks used the bulk of funds to repay their own borrowings. As debt becomes due for repayment through the year, banks may need to sell sovereign bonds purchased with the funds drawn under the LTRO. Unless market conditions normalise and banks regain access to normal funding quickly, this will place increasing pressure on sovereign funding. 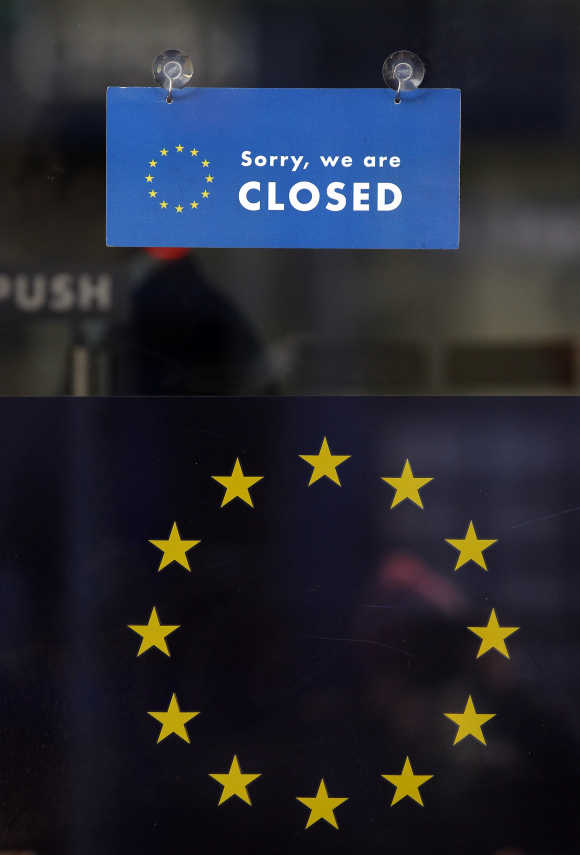 The need for collateral to support ECB funding makes other investors de facto subordinated lenders reducing their willingness to lend or increasing the cost.

In the Greek restructuring, European central banks and official institutions were exempted by retrospective legislation from loss while other investors suffered 75 per cent writedowns.

This has reduced investor willingness to finance countries considered troubled. European banks already have large exposures to sovereign debt, which the LTRO has encouraged them to increase.

Spanish and Italian banks are thought to have purchased around euro 90 billion and euro 50 billion of their country's bonds since the commencement of LTRO.

As interest rates on Spanish and Italian bonds have increased, buyers now have large unrealised mark-to-market losses on these holdings.

As with the sovereigns, the LTRO does not solve the longer-term problems of the solvency or funding of banks, which now remain heavily dependent on the largesse of the central banks. 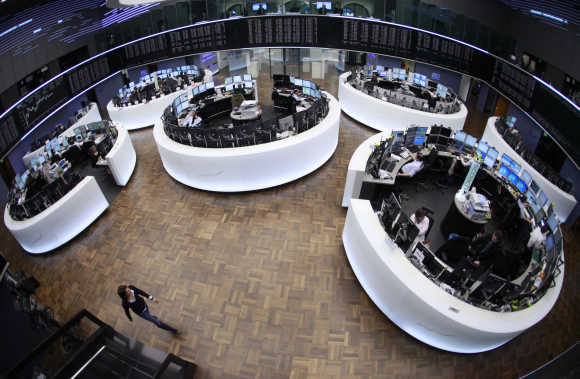 Image: A view of the trading floor at the Frankfurt stock exchange.
Photographs: Alex Domanski/Reuters

The LTRO has not materially increased the supply of credit to individual and businesses. The LTRO does little to promote desperately needed economic growth in the euro zone.

The initial euphoria faded as a number of concerns re-emerged, manifesting themselves in the form of increasing rates on Spanish and Italian debt that now hover around the key level of 6.00 per cent a year.

Increasingly poor economic growth figures from Europe pointed to a lack of growth and progress on debt reduction.

Attempts to reduce Spain's deficit have proved problematic. It is unclear what markets fear most - Spain not achieving it targets through savage spending cuts resulting in higher debt or Spain achieving it target putting the economy into an even deeper recession and increasing debt.

Increased reliance by Spanish and Italian banks on financing from central banks has heightened concern. Spanish bank borrowings from the ECB increased to over euro 300 billion in March from euro 170 billion in February.

Lending to Spanish banks now accounts for nearly 30 per cent of total ECB lending. Italian banks have also been heavy borrowers, a reminder of the linkage between banks and their sovereigns. 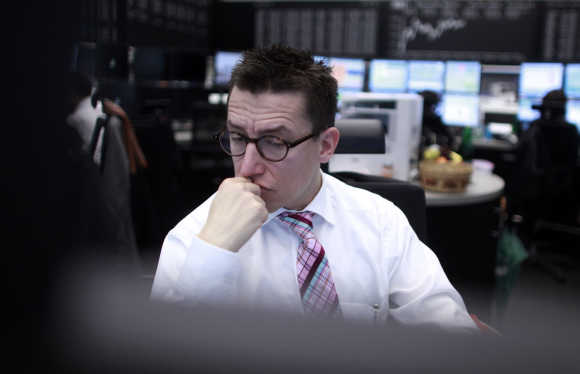 Image: The European debt crisis is not over.
Photographs: Alex Domanski/Reuters

Beyond the German favoured remedy of asphyxiating austerity to either cure or kill the patient, Europe is rapidly running out of ideas and time to deal with the issues. As the real economy stalls and debt problems continue, the most likely policy actions may come from the ECB - an interest rate cut to near zero and further liquidity support, perhaps even full-scale quantitative easing.

It is doubtful whether it will work. Official policies and action are focused on deferring rather than dealing with the problem. John Maynard Keynes observed in The Economic Consequences of the Peace that each action designed to bring closure to one crisis sows the seeds of greater economic, political and social problems.

Europe seems to be living that statement one day at a time.

Satyajit Das is author of Extreme Money: The Masters of the Universe and the Cult of Risk