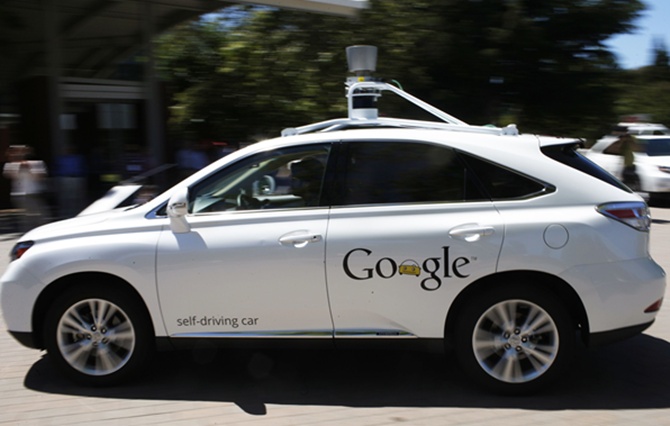 Self-driving cars could appear on roads by the end of this decade.

The car stopped at stop signs. It glided around curves. It didn't lurch or jolt. The most remarkable thing about the drive was that it was utterly unremarkable.

This isn't damning with faint praise. It's actually high praise for the car in question: Google Inc.'s driverless car.

Most automotive test drives (of which I've done dozens while covering the car industry for nearly 30 years) are altogether different. 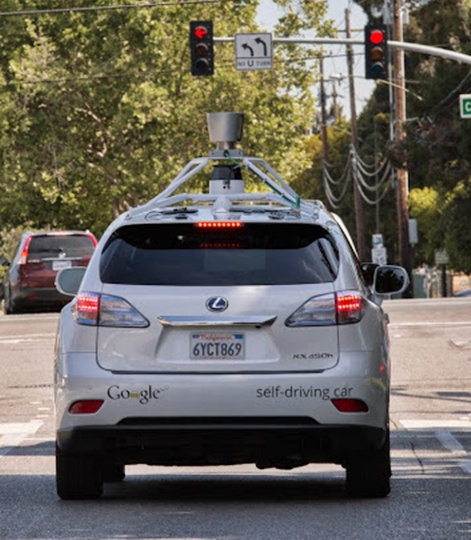 There's a high-horsepower car. A high-testosterone automotive engineer. And a high-speed race around a test track by a boy-racer journalist eager to prove that, with just a few more breaks, he really could have been, you know, a NASCAR driver.

This test drive, in contrast, took place on the placid streets of Mountain View, the Silicon Valley town that houses Google's headquarters.

The engineers on hand weren't high-powered "car guys" but soft-spoken Alpha Geeks of the sort that have emerged as the Valley's dominant species. 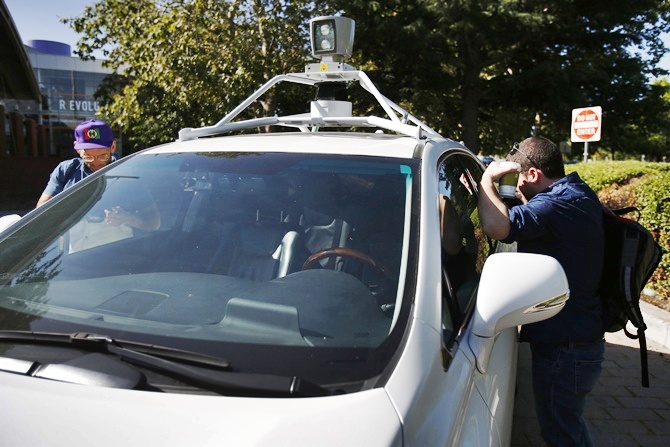 And there wasn't any speeding even though, ironically, Google's engineers have determined that speeding actually is safer than going the speed limit in some circumstances.

"Thousands and thousands of people are killed in car accidents every year," said Dmitri Dolgov, the project's boyish Russian-born lead software engineer, who now is a U.S. citizen, describing his sense of mission. "This could change that."

Dolgov, who's 36 years old, confesses that he drives a Subaru instead of a high-horsepower beast. 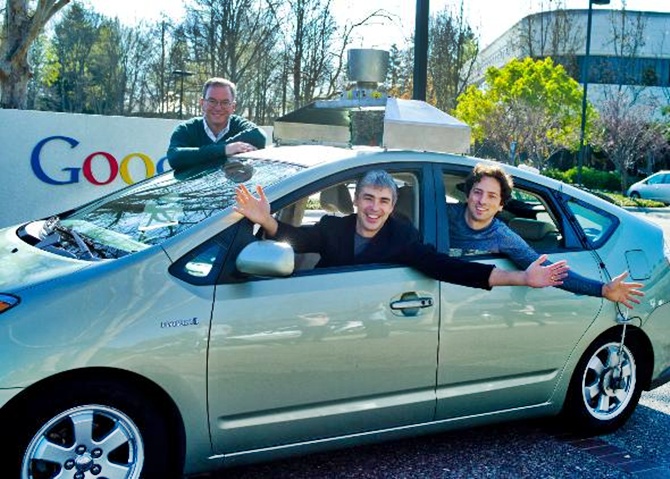 Not once during an hour-long conversation did he utter the words "performance," "horsepower," or "zero-to-60," which are mantras at every other new-car test drive. Instead Dolgov repeatedly invoked "autonomy," the techie term for cars capable of driving themselves.

Google publicly disclosed its driverless car program in 2010, though it began the previous year.

It's part of the company's "Google X" division, overseen directly by co-founder Sergey Brin and devoted to "moon shot" projects by the Internet company, as Dolgov puts it, that might take years, if ever, to bear fruit. 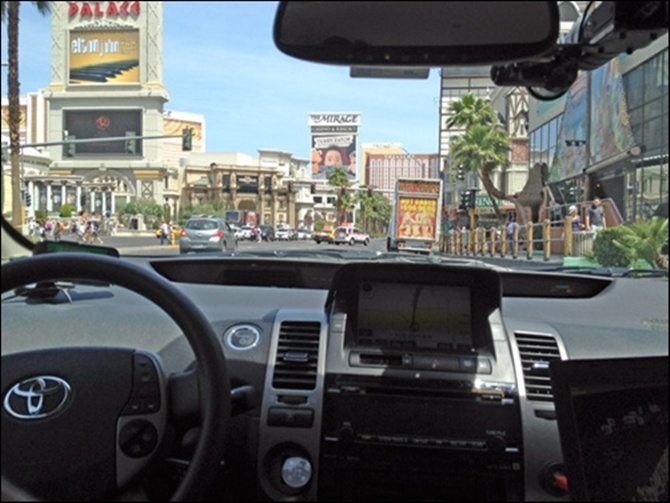 So if there's a business plan for the driverless car, Google isn't disclosing it. Dolgov, who recently "drove" one of his autonomous creations the 450 miles (725 km) or so from Silicon Valley to Tahoe and back for a short holiday, simply says his mission is to perfect the technology, after which the business model will fall into place.

Not Winning Beauty Contests, Yet

Judging from my non-eventful autonomous trek through Mountain View, the technology easily handles routine driving. The car was a Lexus RX 450h, a gas-electric hybrid crossover vehicle - with special modifications, of course.

There's a front-mounted radar sensor for collision avoidance. And more conspicuously, a revolving cylinder perched above the car's roof that's loaded with lasers, cameras, sensors and other detection and guidance gear. 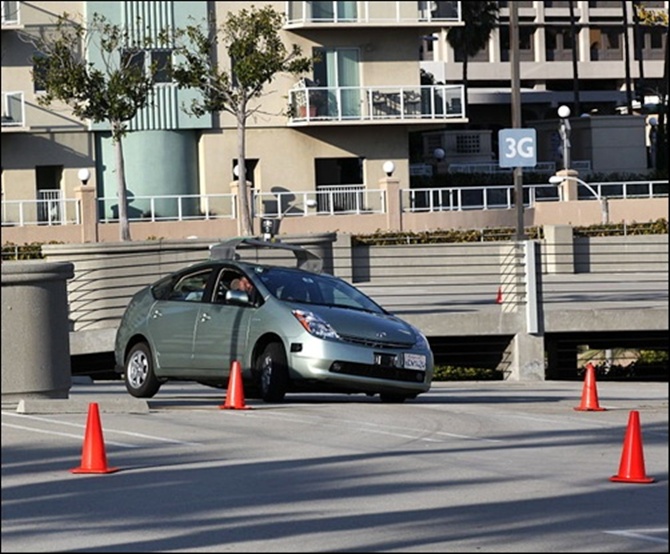 The cylinder is affixed with ugly metal struts, signaling that stylistic grace, like the business plan, has yet to emerge.

But function precedes form here, and that rotating cylinder is a reasonable replacement for the human brain (at least some human brains) behind the wheel of a car.

During the 25-minute test ride the "driver's seat" was occupied by Brian Torcellini, whose title, oddly, is "Lead Test Driver" for the driverless car project.

Before joining Google the 30-year-old Torcellini, who studied at San Diego State University, had hoped to become a "surf journalist." Really. 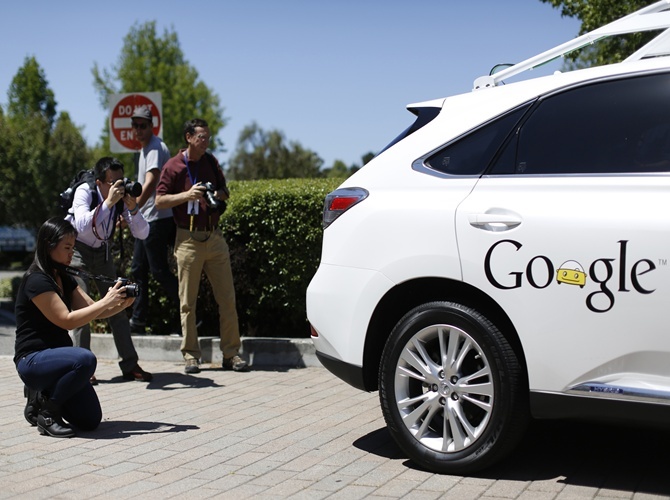 Now he's riding a different kind of wave. He sat behind the test car's steering wheel just in case something went awry and he had to revert to manual control. But that wasn't necessary.

Dolgov, in the front passenger's seat, entered the desired destination to a laptop computer that was wired into the car. The car mapped the route and headed off.

The only excitement, such as it was, occurred when an oncoming car seemed about to turn left across our path. The driverless car hit the brakes, and the driver of the oncoming car quickly corrected course.

I sat in the back seat, not my usual test-driving position, right behind Torcellini. The ride was so smooth and uneventful that, except for seeing his hands, I wouldn't known that the car was completely piloting itself - steering, stopping and starting - lock, stock and dipstick. 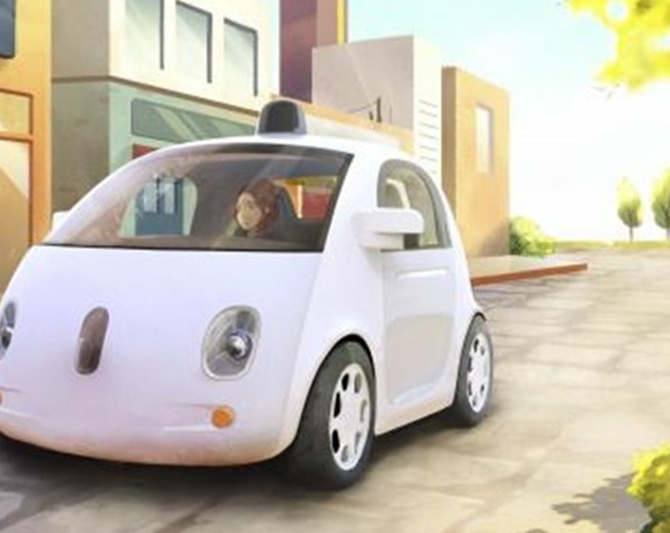 In addition to the model I tested - and other such adapted versions of conventional cars - Google also has built little bubble-shaped test cars that lack steering wheels, brakes and accelerator pedals.

They run on electricity, seat two people and are limited to going 25 mph (40 kph.) In other words, self-driving golf carts.

Google's isn't the only driverless car in development. One of the others is just a few miles away at Stanford University (where Dolgov did post-doctoral study.) 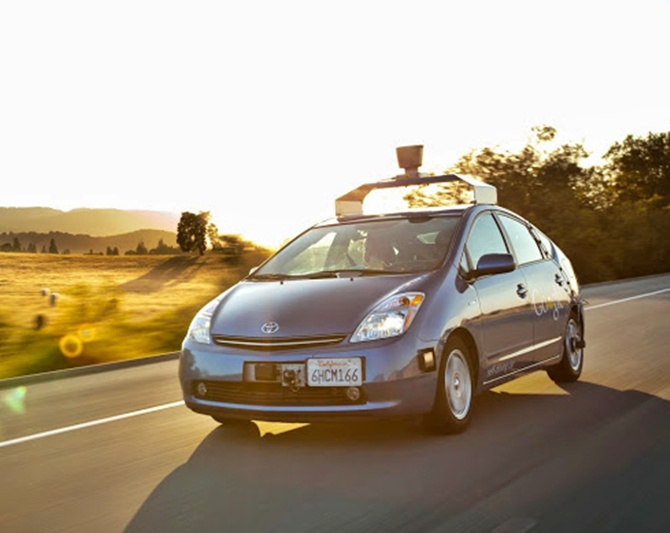 Beyond that, there are "ethical issues," as he terms them. "Should a car try to protect its occupants at the expense of hitting pedestrians?" Gerdes asks. "And will we accept it when machines make mistakes, even if they make far fewer mistakes than humans? We can significantly reduce risk, but I don't think we can drive it to zero."

That issue, in turn, raises the question of who is liable when a driverless car is involved in a collision - the car's occupants, the auto maker or the software company. Legal issues might be almost as vexing as technical ones, some experts believe. 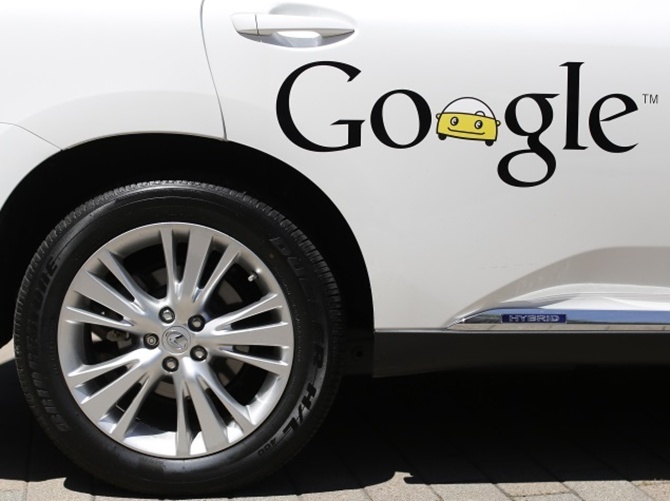 Self-driving cars could appear on roads by the end of this decade, predicted a detailed report on the budding driverless industry issued late last year by investment bank Morgan Stanley. Other experts deem that forecast extremely optimistic.

But cars with "semi-autonomous" features, such as collision-avoidance radar that maintains a safe distance from the car ahead, are already on the market. And the potential advantages - improved safety, less traffic congestion and more - are winning converts to the autonomy cause.

"This is not a toy," declared the Morgan Stanley research report. "The social and economic implications are enormous."

For video of a car similar to the one tested, see http://reut.rs/YfiJez

Paul Ingrassia, managing editor of Reuters, is the author of three books on automobiles, and has been covering the industry since 1985.