Production at every automotive facility, offices of information technology firms and retail establishments in the state remained shut on Tuesday as a mark of respect to the late chief minister. Tamil Nadu is estimated to have suffered a loss of about Rs 1,500 crore on Tuesday, as industries and businesses in the state remained shut in the wake of the demise of former chief minister J Jayalalithaa late and a statewide seven-day mourning announced thereafter.

Production at every automotive facility, offices of information technology firms and retail establishments in the state remained shut on Tuesday as a mark of respect to the late chief minister.

An estimated Rs 1,000 crore was lost on Tuesday on account of the unscheduled closure of business. Automotive dealers and regional transport offices also remained shut.

While the Centre declared a one-day national mourning on Tuesday, Tamil Nadu announced that the state would mourn for seven days for Jayalalithaa.

Although there has not been any untoward incident reported anywhere in Tamil Nadu, all companies, however, have decided to wait and watch.

Sumit Sawhney, country chief executive and managing director, Renault India, said: “We had to keep the plant shut on Tuesday but about Wednesday we really can’t say anything at the moment. By late evening, we’ll get to know what the situation looks like.”

There was violence outside the Apollo hospital in Chennai early on Monday night after unconfirmed news broke out about the death of Jayalalithaa. This was a few hours before the hospital issued an official release about her death past midnight.

“We will take a call after assessing the law and order situation on Wednesday. If everything is peaceful Tuesday night after cremation (of Jayalalithaa), then we can open production tomorrow (Wednesday),” said a senior official of an SUV manufacturer.

Information technology and related services companies, which collectively employ around 400,000 people in Tamil Nadu in more than 600 companies, remained shut on Tuesday.

Retail shops across the state too decided to down shutters. At Chennai's popular retail hub T Nagar, which is one of the largest in the country, shops were closed since Monday evening. This hub does a business of around Rs 100-200 crore a day according to estimates.

Jayalalithaa's term saw some big ticket investments in the state with over $20 billion of foreign direct investment. During last year’s Global Investors Summit, over Rs 2.43 lakh crore worth of investments were signed by the state.

Image: Supporters of Tamil Nadu Chief Minister Jayalalithaa mourn in front of a banner bearing her photograph during a procession in Ahmedabad, on December 6, 2016. Photograph: Amit Dave/Reuters. 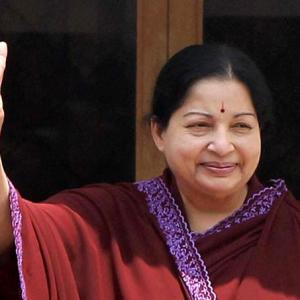 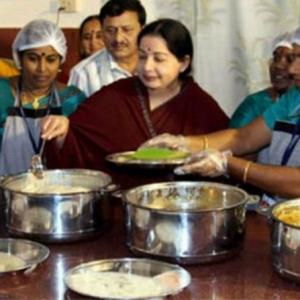 Amma canteens to salt, will the brand survive after Jayalalithaa?