Steve Case's book is filled with insightful scenes that describe how the modern online industry was put together, notes Ajit Balakrishnan. 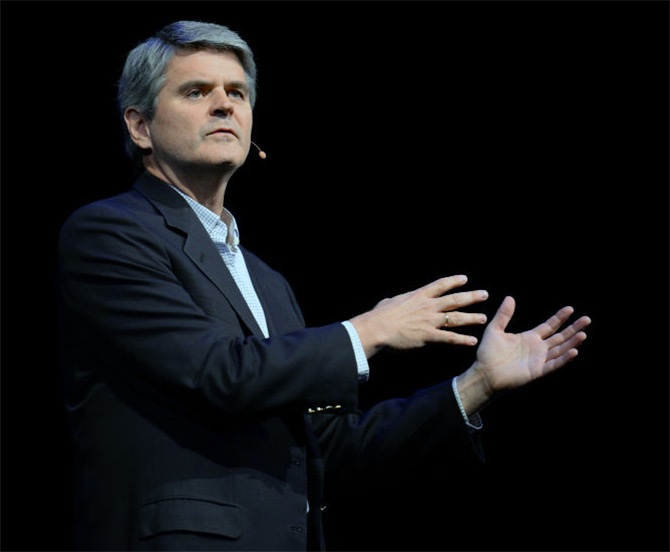 Image: Steve Case was in the middle of the action in the early 1990s when companies like Apple and Microsoft were being formed.

"I met Jobs to discuss the music business about a year before he launched the iPod," writes Steve Case in his latest book, The Third Wave.

"The two of us sat in a dark corner of a quiet San Francisco sushi restaurant, hoping that nobody would recognise us…."

He then goes on to recount how Jobs solved the problem of getting enough music companies to put their content on the iTunes website that supported the iPod.

"He approached the music companies and told them not to worry, that iTunes only worked with Macintosh, which at the time had a meagre two per cent market share. Apple pitched iTunes as a risk-free laboratory for the record labels, the opportunity for the industry to test a different model - a model other than …litigating piracy….Had Jobs been more frank about his ambition - that he was aiming for a billion users - he likely wouldn't have gotten the licenses".

Mr Case's book is filled with such insightful scenes that describe how the modern online industry was put together.

The iPod case illustrates one of his theories about success as a start-up - that forging partnerships with key players in the ecosystem is the critical to success.

In other words, however brilliant a piece of hardware the iPod was, without the range of music on its companion website, iTunes, it would have perished.

And making the music available meant persuading the established music industry giants that the iPod would not only be not a threat but would help them sell more music.

Mr Case was in the middle of the action in the early 1990s when companies like Apple and Microsoft were being formed.

He was the founder of America Online (AOL), an early provider of online services years before Google and Facebook and such others were born.

His master coup was when he engineered in January 2000, at the peak of the dotcom mania, a merger between his AOL and the media colossus Time Warner.

All they needed to do was the simple task of adding the appropriate "user-interface" layer that would blend the two company's offerings.

Unfortunately, in less than six months after this giant merger, the dotcom bubble burst, the US economy dived into a recession, advertising dollars completely evaporated and AOL was forced to take a goodwill write-off of nearly $99 billion, an astonishing sum even by the dreadful standards of that period.

In his accounting, the period that led up to the merger of his company AOL with Time Warner was the First Wave of the internet.

In that period the companies which achieved success were those that built the hardware, software and networks that made up the pipes that made it possible to access the internet. There was CISCO, which built the routers, boxes that connected different networks that carried internet traffic.

Then there was Microsoft whose Windows software made it possible for us to interact with our personal computers. Finally, there were the telecom companies, literally hundreds of them, who owned the wires that carried internet traffic from our PCs to websites that we all flocked to.

This First Wave, says Mr Case, was followed by hundreds if not thousands of companies that made up the Second Wave.

There were search engines by the dozens of which Google emerged as a winner in the English-speaking world, at least.

These helped us all negotiate through the tens of thousands of websites that had by then emerged. Then came the Shopping Sites, again tens of thousands of them, of which companies like Amazon (in the United States), Alibaba (China) and Rakuten (Japan) emerged as leaders. Finally there were myriad social networking sites of which Facebook emerged a winner.

This era also saw the emergence of innovative devices like the iPhone and Android, which by today has eclipsed the previously ubiquitous personal computer.

Mr Case says that this Second Wave phase is about to end. The Third Wave, he predicts, is an era when "internet-enabled" will start to sound as ludicrous as the term "electricity-enabled".

Entrepreneurs and companies of this Third Wave will have to attack different problems and solve them differently from the earlier two waves if they have to succeed.

For instance, he believes that the top three industries that will come under attack in the Third Wave are healthcare (fitness trackers are early examples), education ("an online marketplace where teachers can buy and sell lesson plans") and food ("imagine an oven that refuses to cook questionable meat").

His book has many examples of Third Wave companies and their strategies.

His ultimate tip to entrepreneurs in the Third Wave: "let's worry a little less about out net worth and a little more about our net impact".

The reviewer is the author of The Wave Rider, a Chronicle of the Information Age. You can mail him at ajitb@rediffmail.com