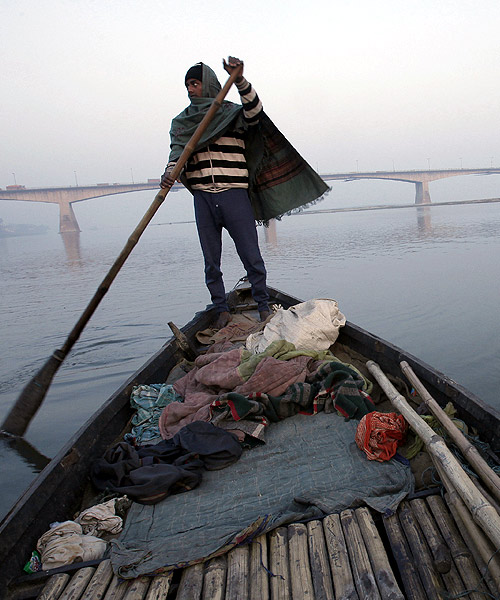 Image: A man rows his boat in the waters of river Ganges with Mahatma Gandhi Setu bridge seen in the background in Patna.
Photographs: Adnan Abidi/Reuters Sunil Sethi

Amartya Sen and Jean Dreze advocate stronger laws to improve basic education but believe that public scepticism and media criticism of corruption in such schemes are misplaced, says Sunil Sethi.

There are reasons for India to hang its head in shame,” says Amartya Sen in an interview this week.

“Half of all Indians have no toilet. It’s absolutely shocking. Poor people have to use their ingenuity and for women that can mean only being able to relieve themselves after dark with all the safety issues that entails.”

This, he adds, is an example of India’s defective development. The Nobel laureate is on a whistle-stop international tour to promote his new book written with his long-standing collaborator Jean Drèze, the austere former member of the National Advisory Council and architect of social welfare schemes such as the Mahatma Gandhi National Rural Employment Guarantee Act (MGNREGA). 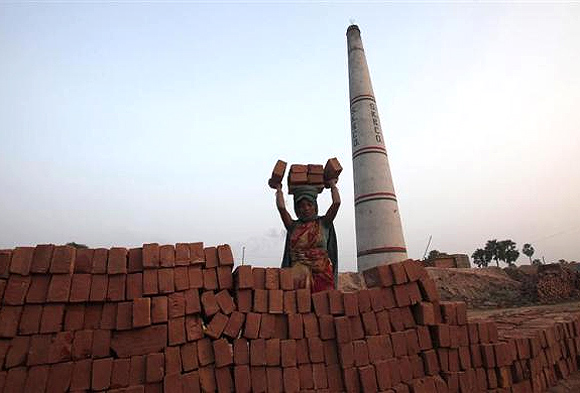 Image: A labourer works at a brick factory at Hajipur industrial park on the outskirts of Patna, in Bihar.
Photographs: Adnan Abidi/Reuters

For those familiar with other joint efforts by the two economists, An Uncertain Glory: India and its Contradictions (Penguin; Rs 699) is an iteration of several earlier themes and arguments: that India’s relatively high GDP growth rate has largely benefited the better off, for example, by way of power and fertiliser subsidies; that living conditions have not improved for the majority — mass illiteracy and lack of school education, especially among women, 50 per cent undernourished children, stagnant wages and absurdly low definitions of poverty cannot make India take its place among the “big league” of the world.

“A democratic country can hardly want to become part California and part sub-Saharan Africa,” is the type of astringent comment that peppers the work. Using micro studies, comparative analysis and a plethora of statistical tables, the book is fluent, up to date and shows that there is plenty to argue about. 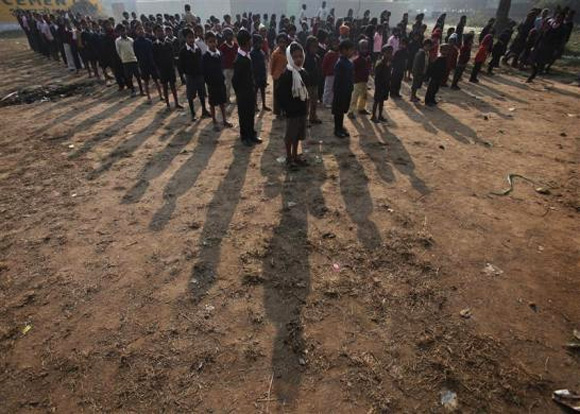 Image: School children stand during the morning prayer at a school in Anandpur near Patna, in Bihar.
Photographs: Adnan Abidi/Reuters

And by complete coincidence, as if to place its contents in stark relief, the book comes out the very week when nearly two dozen schoolchildren have died from eating contaminated government-funded midday meals in a village school not far from Patna.

The horror of the story is amplified by defensive ministers alleging deliberate poisoning, and Opposition-sponsored bandhs and public anger spilling into the streets. More telling, if tragic, is the statement of Amardeep Sinha, principal secretary to the state government, that although proper kitchen sheds and storage rooms in schools were necessary to prepare midday meals, there was no land  to construct a kitchen shed in 13,500 schools.

Does this imply that the lives of many more schoolchildren are at risk from food cooked in squalid conditions — or supplies stored in cans of lethal pesticide?

It is a comment on Chief Minister Nitish Kumar’s “uncertain glory”; a blot on his development model – with much-publicised free meals and bicycles for girls at school – that has won him two successive elections, and earned the confident hope of a hat trick in 2014. 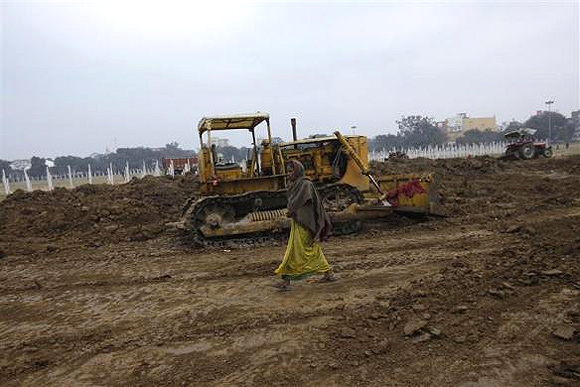 Image: A woman walks past a bulldozer at a park being renovated in Patna.
Photographs: Adnan Abidi/Reuters

It is also the sort of horrifying case, though small but one of numerous throughout the country, that does not merit examination in Professors Dreze and Sen’s work.

It doesn’t quite fit the scheme of their energetic, expansive study. They advocate higher investment and stronger legislation in improving basic education through the Sarva Shiksha Abhiyan and the Right to Education Act, but believe that public scepticism and media criticism of corruption and waste in these schemes (or other welfare measures like the public distribution system and the MGNREGA) are misplaced and possibly overblown.

In a survey of schools in 200 villages in seven north Indian states in 1996 and 2006, they found enrolment and amenities like toilets and drinking water had improved dramatically. As to what the children were learning in school, the authors are pained to report that it was pretty much zilch. 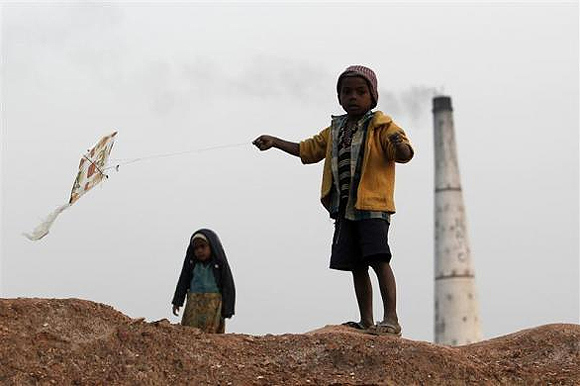 Image: A boy flies a kite near a brick factory at Hajipur industrial park on the outskirts of Patna.
Photographs: Adnan Abidi/Reuters

About one-third of the kids skipped school and absenteeism among teachers was rampant. Cooked midday meals were clearly a draw. What about getting poisoned? Good heavens, no.

One of Professor Sen’s recent assertions to highlight India’s skewed development record is to contrast it with neighbouring Bangladesh.

Despite half India’s per capita income, it has shot ahead on several counts, including life expectancy, fall in fertility rates, child immunisation and child mortality. This is because it has strongly focused on female literacy and women’s empowerment.

These attributes were missing in the school principal and cook, both women it so happens, whose negligence led to children’s death. It is Bihar and India’s double shocker.