News
Business
Movies
Sports
Cricket
Get Ahead
Money Tips
Shopping
Sign in  |  Create a Rediffmail account
Rediff.com  » Business » Singur works even during the Pujas to return land to farmers

Singur works even during the Pujas to return land to farmers 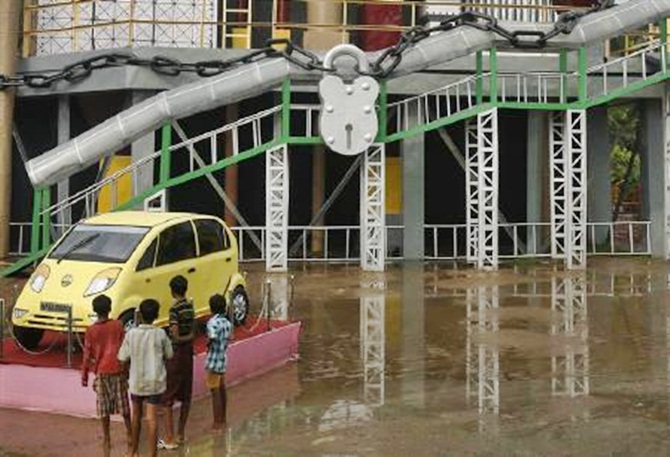 The road to the erstwhile site of Tata Motors’ Nano factory in Singur, Hooghly district, is now clear of the thick foliage that had grown over it in the past eight years, paving the way for dumper trucks to keep coming and going day and night.

Officials from the district magistrate’s office and the state police are busy noting the number plates on the trucks at a camp, while a guard keeps a close watch on the frenetic pace of activity on the ground from a makeshift tower.

The hustle and bustle is palpable, much like the years between 2006 and 2008, when Tata Motors was readying the plant to roll out the Nano, which was touted as the cheapest car in the world.

Save for a notice that says the work at the site is in accordance with a Supreme Court verdict and entry to the site is prohibited, it would have seemed that Singur had turned back the clock to better times.

The year 2006 was a watershed year for Bengal. Pro-industry Buddhadeb Bhattacharjee became the chief minister after the CPI-M won the assembly elections by an overwhelming majority. Several projects were announced. One was Tata Motors’ Nano.

However, of the 13,000 project-affected farmers, 2,000 refused to accept compensation cheques and, thereby, became “unwilling”. An indefinite agitation led by Mamata Banerjee, then in the Opposition, followed. This ultimately led to the relocation of the Nano plant to Sanand, Gujarat, in October 2008.

In January 2008, then Tata Motors chairman Ratan Tata had unveiled the Nano at the Delhi auto expo, and the commercial launch was to happen later that year. At the time of shifting the plant, which was constructed in 13 months, 95 per cent of the work was completed. Thirteen vendors associated with the project had completed construction of their plants and another 17 were in various stages of construction. Twenty-four other vendors were at various stages of obtaining approvals for construction. The pace of work at Singur was at its peak because a deadline had to be met.

In August 2016, the Supreme Court set aside the acquisition of 997 acres by the Left Front government for the Nano project and directed the Trinamool Congress government, led by Mamata Banerjee, to re-distribute the land to its owners in 12 weeks. Half of that time is already over.

“Around 80 per cent of the dismantling of the structures on the site is over. Part of the land demarcation work is also over. We are working towards completing the work within 12 weeks,” a government official said. Government agencies -- Kolkata Municipal Corporation, Kolkata Metropolitan Development Authority and Hooghly River Bridge Commissioners -- and its contractors have been working overtime to complete the work.

State government employees have been on a holiday since October 6 but the ones working in Singur have stayed put. “We worked during the Durga Puja. There have been no holidays for us. The people at the site are even working at night,” an official at the block development office said.

The Bengal government had initially given Tata Motors time to dismantle the structure. But sources close to the development said Tata Motors had conveyed to the state government that its case was still pending in the Supreme Court.

Tata Motors said it did not wish to comment.

Dismantling the structure has proven to be an arduous task for the government agencies. First, it tried dynamites to bring down the concrete. It did not give the desired results. “We are now using rock breakers,” a government official said.

Landowners will be given possession of the plots only after the dismantling and demarcation is over.

Chief Minister Banerjee has promised that she will make the land cultivable. But even the most ardent of her supporters is sceptical whether it will happen and when, if at all. 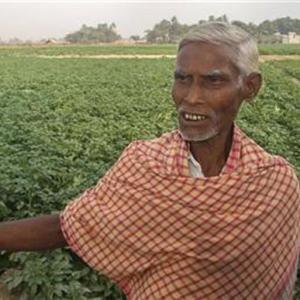 It's D-Day at Singur: Mamata returns land to farmers