Rupee falls 47 paisa to close at record low of 72.98 as crude oil rises

The stubbornly high global crude oil prices are opening up a can of worms to heightened inflation risks and likely to disrupt government's fiscal maths along with deteriorating global financial conditions. 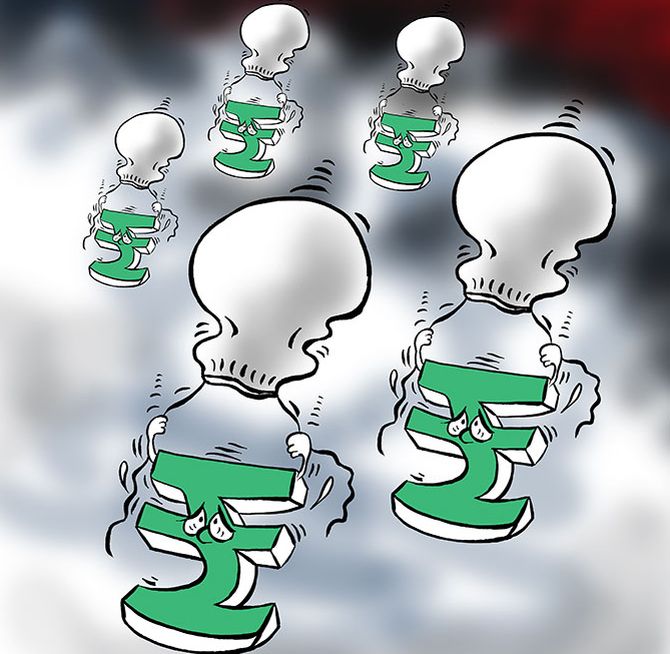 The rupee on Tuesday slid further 47 paise to settle at a record low of 72.98 against the US currency due to surging crude oil prices and escalating trade war worries.

Panic dollar demand from importers and speculative traders sent the home currency sinking to a historic low of 72.99 in late afternoon deals with very little chance of RBI intervention.

A sharp spike in international crude oil prices weighed on the trading front towards the tail-end session even as the US dollar fell to seven-week lows after Donald Trump announced fresh 10 per cent tariffs on Chinese imports.

US President Donald Trump on Monday night announced to impose additional 10 per cent duties on Chinese imports worth $200 billion.

Since Monday, the rupee has plunged by 114 paise or more than 1.5 per cent as trade war concerns resurfaced and crude oil rebounded.

The stubbornly high global crude oil prices are opening up a can of worms to heightened inflation risks and likely to disrupt government's fiscal maths along with deteriorating global financial conditions.

Considering that India is a net importer of crude oil, the impact of this imported inflation is expected to be significant.

The benchmark 10-year sovereign yield also spiked to 8.14 per cent.

At the inter-bank foreign exchange (forex) market, the rupee opened weak at 72.51 against Monday's close of 72.55 on sustained dollar demand.

However, overcoming the initial volatility, the local unit rebounded to hit a session high of 72.35 before taking a big reversal.

Reeling under an unprecedented speculative sell-off, the rupee plunged sharply to hit an all-time low of 72.99 before ending at a record low of 72.98, showing a steep loss of 47 paise, or 0.65 per cent.

It shed a whopping 67 paise against the USD on Monday.

The Financial Benchmarks India private limited (FBIL), meanwhile, fixed the reference rate for the dollar at 72.3796 and for the euro at 84.7657.

Stock markets dropped by 0.78 per cent due to selling in auto and financial shares.

On the global front, the dollar dropped to a seven-week low before paring some of its losses against global rivals as the White House imposed fresh tariffs on China.

Against a basket of other currencies, the dollar index fell to a low of 94.35 before trading at 94.57.

In the forward market, the premium for dollar showed a mixed trend owing to lack of market-moving factors.

Source: PTI© Copyright 2020 PTI. All rights reserved. Republication or redistribution of PTI content, including by framing or similar means, is expressly prohibited without the prior written consent.
Related News: FBIL, Financial Benchmarks India, USD, US, Donald Trump
SHARE THIS STORY
Print this article