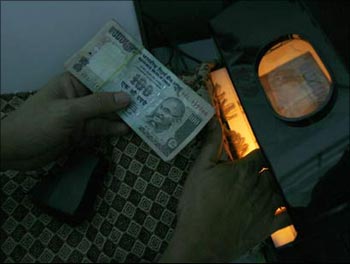 The Parliamentary Committee on Public Undertakings (COPU) expressed serious concern over outsourcing of printing of Indian currency notes amounting to Rs 1 lakh crore (Rs 1 trillion) to three countries in 1997-98 and said that such a tendency would put India's economic sovereignty at stake.

Pulling up the Reserve Bank of India and the Union finance ministry for outsourcing of currency notes, the COPU said it was 'aghast' at the move and described it as 'an unprecedented, unconventional and uncalled for measure'.

COPU said it was not convinced by the explanations submitted to it for such a step.

The COPU report states that consequences of such a decision are 'very grave with a tendency to put our entire economic sovereignty at stake'.

This is the only instance of outsourcing of printing of notes in India, the report observes.

'The committee had also fervently emphasised that outsourcing of printing of currency note/minting coins should never be resorted to in future,' Deo said.

Stating that the reasons for outsourcing such as the bad conditions of  the notes and the 'soilage' factor attributed by the RBI representative to the committee are 'far from convincing', the committee asked how a decision was made to get the currency notes printed abroad in three different countries

The committee expressed apprehensions that in giving such a contract to foreign countries 'there was always a risk of unauthorised printing of excess currency note which would have been unaccounted money'.

The committee highlighted 'the likely danger of the economy being destabilised by the agencies or authorities who could have misused our security parameters vis-a-vis printing of currency notes, the use of such notes which could have been printed in excess could easily have fallen in the hands of unscrupulous elements such as terrorists, extremists and other economic offenders'.

In order to prevent such incidents from recurring in the future, the committee said the state-run Security Printing and Minting Corporation of India Ltd must be strengthened to undertake the printing and minting of the required currency note/coins domestically.

It asked the finance ministry to clinch the issue with the RBI so that the latter projects the indents for currency notes and coins five years in advance. This way, it said, 'the capacity of each unit of SPMCIL is neither kept idle nor overburdened due to uneven annual demands nor difficulties faced in meeting the increased demands as had happened in 1996-98 when the government of India had to resort to outsourcing of printing of currency notes to foreign agencies'.

The report took exception to the remarks of the SPMCIL chairman on the operational role of the company in checking counterfeit currency when he deposed before the committee stating that: "Counterfeit matter remains with the government. I am basically their vendor."

The committee said that SPMCIL is not ' just a vendor but a government agent equally accountable for production of an ideal currency which cannot be easily counterfeited'.

It urged the company to direct its efforts towards 'continuous design innovations conforming to international standards so as to meet the challenges of counterfeiting effectively'.

Critical of the company's delay in disposal of impaired currency printing machinery and the move to preserve such machinery which is fraught with the risk of theft and its subsequent misuse in printing of fake currency or stamp papers, the COPU cited the instance of the Telgi stamp paper scam.

It asked the company to undertake the safe and irreversible disposal of impaired machineries lying with the corporation.

SPMCIL was incorporated in January 2006 following a decision by the government to corporate four mints, four presses and one paper mill earlier functioning under direct control of the ministry of finance as industrial departmental units. 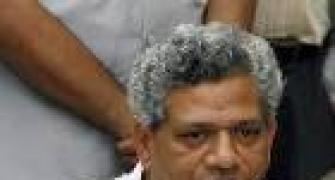 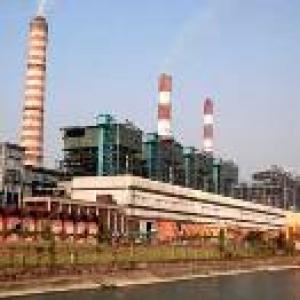