Weakness in Asian stocks after the Bank of Japan and the US Federal Reserve deciding to keep interest rates on hold weighed on domestic bourses.

In overseas markets, Asian stocks dropped as investors digested the US Federal Reserve's decision to keep interest rates on hold.

In Japan, the Nikkei 225 index was currently down 3.17% after the Bank of Japan (BoJ) kept monetary policy steady as was widely expected. 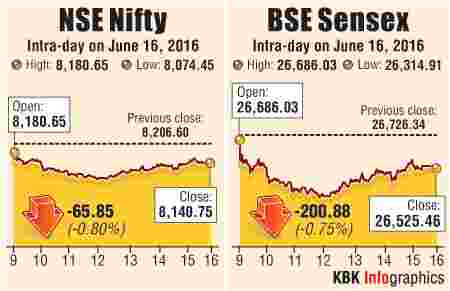 At the end of a two-day monetary policy review, the BoJ said it will continue to conduct money market operations so the monetary base increases at an annual pace of 80 trillion yen ($760 billion) and maintain a negative interest rate of minus 0.1% to the policy-rate balances in current accounts held by financial institutions at the bank.

In mainland China, the Shanghai Composite index was currently off 0.32%.

In Hong Kong, the Hang Seng index was currently down 1.97%. US stocks ended lower yesterday, marking a fifth session of losses, after the US Federal Reserve left interest rates unchanged and backed off an aggressive stance on future rate hikes.

Closer home, the broad market depicted weakness. There were more than two losers for every gainer on BSE.

The BSE Small-Cap index was currently off 0.84%. The fall in both these indices was lower than the Sensex's decline in percentage terms.

Shares of associate banks of SBI surged, extending gains registered during the previous trading session triggered by media reports that the government has given its go ahead for merger of 5 associate banks with SBI.

State Bank of Mysore (up 17.36%), State Bank of Travancore (up 13.32%) and State Bank of Bikaner and Jaipur (up 13.74%) surged. All these three stock rose by their respective 20% maximum permissible daily level yesterday.

On 17 May 2016, SBI had announced that it was seeking in principle sanction of the Government of India (GoI) to enter into negotiation with its 5 subsidiary banks viz. State Bank of Bikaner and Jaipur, State Bank of Hyderabad, State Bank of Mysore, State Bank of Patiala and State Bank of Travancore to acquire their businesses including assets and liabilities. At that time SBI also said that its board of directors will take a final call after evaluating all the relevant considerations.

SBI also said at that time that it was considering acquisition of the newly-created Bharatiya Mahila Bank.

The commerce ministry released the trade data on provisional basis for May 2016 after trading hours yesterday. 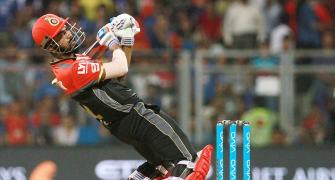 'When someone says you can't do something, prove them wrong' 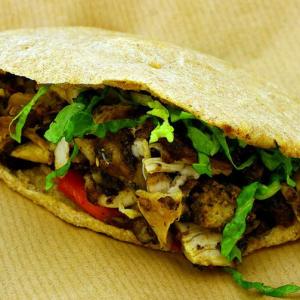