The sale will be quicker if an Indian private bank buys it; it will take longer for regulatory clearances if a foreign bank or an NBFC buys it, points out Tamal Bandyopadhyay. Many moons ago, when I was finding my feet in bank reporting, Sujit Banerji, then corporate business head at Citibank NA in India, unfolded before me the bank's vision to go beyond the elite group of clients and reach out to the masses -- taking Citi to suburbs, in his words. (Banerji was relocated to Brussels to oversee strategic and operational planning and corporate alliances for central and eastern Europe, West Asia and Africa in 2001.)

More than two decades later, after 119 years in India, which is one of the top five markets in terms of revenue and profits for the parent bank in the US, Citi is readying to start its reverse journey.

It will shut its consumer banking division -- credit card, mortgage, personal loan, deposits and wealth management businesses -- in India where it operates through 35 branches and 525 ATMs.

India is one of the 13 markets from where Citi, one of the 'Big Four' banks in the US, plans to exit.

It will continue with its consumer banking business in Mexico (where it is the second largest bank) and four global wealth centres -- Hong Kong, Singapore, UAE and UK -- beside the US.

A strategic decision by Citigroup's new CEO Jane Fraser, it's no reflection on its India operations.

At the root of this is probably displeasure of the US Federal Reserve and the Office of the Comptroller of the Currency (OCC), a federal agency that oversees the execution of laws relating to national banks, with Citigroup Inc. on several issues relating to deficiencies in enterprise-wide risk management, compliance risk management, data governance, and internal controls.

In October 2020, the OCC penalised Citigroup $400 million for its 'failure to establish effective risk management and data governance programs and internal controls'.

It was directed to seek approval for new acquisitions.

The OCC even reserved the right to change the senior management if the company was not swift in addressing its shortcomings.

Meanwhile, the Fed issued a cease-and-desist order, asking the lender to 'correct practices previously identified by the board in the areas of compliance risk management, data quality management, and internal controls'.

Added to the regulator's ire was growing investors' impatience with the performance of Citi on bourses.

It has been trading below its so-called tangible book value and is substantially cheaper than its peers.

The price/book value ratio is calculated by dividing the price of a share of stock by the book value per share.

When Fraser, who had been overseeing all consumer businesses in 19 countries, took up the baton in March, need for massive investments in its risk infrastructure and controls stared at her.

Should she focus solely on Citi's corporate business where it has a sustainable competitive advantage or consumer banking, which is no longer a global business? That's the trade-off.

It's a fiercely competitive local business in every market where Citi needs to continuously spend on people, technology, products and processes and marketing to remain relevant and grow.

What competition can do is evident from Citibank's credit card business in India.

In 2012, with a 21 per cent market share, Citibank was the No 2 credit card issuer, while expenditure per card was double the industry average; it also had a 30 per cent share in e-commerce spend.

By 2020, its market share in credit cards slipped to around 6 per cent and its position to sixth even though average card spend remained higher than the industry average.

Competition forced it to exit the car finance business in the past.

The consumer banking portfolio is not a problem child and there will be many takers for it.

Citi can get as much as $2.5 billion by selling it, many analysts believe.

It is likely to be a bundled sale and the entire process can take 12-18 months to complete.

Who will buy it? Some of the large private Indian banks would love to have the business on their balance sheets.

Large foreign banks may also look into it -- exclusively the Indian business or the consumer business of a few markets, including India as a package.

Big local non-banking financial companies (NBFC) may also be in the fray.

The sale will be quicker if an Indian private bank buys it; it will take longer for regulatory clearances if a foreign bank or an NBFC buys it.

In the first case, regulatory nod from different geographies will be needed; for the later, the NBFC needs a banking licence first to buy the business as it includes retail deposits, too.

Two-thirds of Citibank's revenue in India comes from the institutional business.

Roughly, it has 30 per cent market share in the business of multinational corporations in India; 25 per cent in custody and a substantial chunk in foreign exchange and derivatives, investment banking, transactions and cash management businesses.

Four centres of Citicorp Services India, an outsourcing outfit that caters to different geographies of the US bank, employ at least 19,000 people. All these will remain with it.

John Reed, former CEO of Citigroup, was a great believer in consumer banking.

After becoming the head of consumer services group, in 1976 he outlined his long-term vision.

'We are creating something new... I refer to a fundamentally new business starting with a dedication to the consumer, and to the proposition that we can offer a set of services that will substantially satisfy a family's financial needs under terms and conditions that will earn the shareholders an adequate profit while creating a healthy, positive and straightforward relationship with the customer.'

Written on vacation, this document is called the Memo from the Beach.

The key thought around the consumer bank was called success transfer -- identifying ideas and products in one business in one geography and transmitting them to another.

In 1977, one branch in Queens launched the ATM; by the end of that year, all of Citi's New York branches had at least two ATMs operating 24 hours a day, seven days a week.

That was the origin of the slogan 'Citi never sleeps'.

Just ahead of the 2008 financial crisis, then Citi boss Charles Prince changed the theme and started exploring financial partnership.

Citi also coined a new slogan: 'Let's Get It Done'. Neither Prince nor his new tagline lasted.

Now, under fire from the regulators and investors, Fraser is changing the business strategy and exiting consumer business.

The heads of 13 markets will have to 'get it done'.

Ashu Khullar, head of India, shouldn't complain. Even after selling the consumer business, he will have enough on his plate.

Corporate banking contributes a little over 60 per cent of its balance sheet but at least 75 per cent of profits.

For retail customers in India though, Citi will go to sleep. 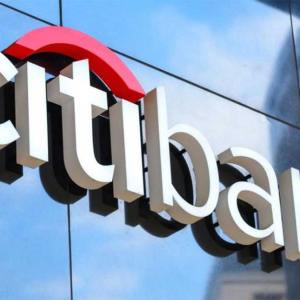