'There is no one capturing and presenting the larger picture, such as to provoke debate the way the GDP numbers do,' observes T N Ninan. 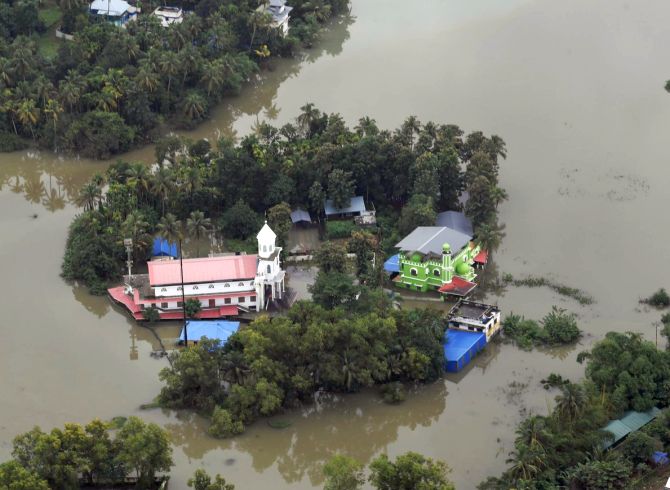 IMAGE: 'After the Kerala floods,' says T N Ninan, 'it hardly bears pointing out that an obvious example of mismanaged assets is the country's natural resources: Water, forests, etc.'
'You can grow income while depleting finite assets (as India has been doing) for a certain period of time, but not forever.' A scene from the prime minister's helicopter, August 18, 2018. Photograph: Press Information Bureau

The manner in which the two leading political parties got into a tizzy over some new numbers on growth of gross domestic product, put out by a government-appointed committee, is instructive.

The Congress was over the moon because growth during its period in office was posted as being about a half-percentage point more than previously reported. The government's response was to come back with a riposte on the costs of that growth.

It would seem that the rate of economic growth has become every government's choice of phallic symbol, never mind that all calculations of GDP are but someone's opinion of the facts.

The calculations are numbingly complex, with all manner of (sometimes arbitrary) assumptions made in order to arrive at the final number.

Especially in an economy like India's, where the unorganised sector of the economy is the preponderant one, whatever GDP growth number is put out is at best a rough approximation.

It is plain silly to get into political slanging matches over such decimal points, especially since the basic narrative is pretty much what it was earlier: The second Congress-alliance government could not sustain the growth rate of the first, and the second BJP-alliance government has not been able to accelerate.

During the long decades when India's growth rate was underwhelming, there was good reason to focus on getting the rate up to what other economies had achieved.

Growth, after all, is the best antidote to poverty -- as validated by the faster reduction in poverty numbers during the years of rapid growth.

But having achieved rapid growth on a sustained basis (though, admittedly, not rapid enough), it is time to recognise that GDP (roughly, national income) is only one measure of performance.

There are plenty of others -- like what has been happening to national assets. Just as the income/expenditure statement of a company needs to be read together with its balance sheet of assets and liabilities, so it is with the economy.

After the Kerala floods, it hardly bears pointing out that an obvious example of mismanaged assets is the country's natural resources: Water, forests, etc.

You can grow income while depleting finite assets (as India has been doing) for a certain period of time, but not forever.

India is running out of water, while continuing to deplete other natural resources like forests.

Why aren't the government’s statisticians enlightening us on changes in the economy's balance sheet, in addition to telling us about national income?

As for institutional capital, which in some ways is the most important of all, most people would agree that some key institutions are being run down in terms of their social capital: Corruption in the courts, suborning of criminal investigation agencies, the autonomy of universities and the quality of university appointments, the operating freedom of the press, and much else.

Then there is equality, or the lack of it. As the distance grows between rich and poor, a society's fault lines come under greater strain.

The geographical inequalities are particularly stark: Bihar's per capita income is a fourth of the southern states. And Uttar Pradesh's less than a third.

Is this a sustainable situation?

Do the gaps in incomes and opportunities explain why there is more vigilante action (lawlessness) in some of the 'Bimaru' states than elsewhere?

Won't the loss of social cohesion translate into economic disruption of one kind or other?

The broader India story does not shine as much as the GDP numbers. But there is no one capturing and presenting the larger picture, such as to provoke debate the way the GDP numbers do.

If the narrative has to go beyond plain growth of income, our statisticians need to focus on the country's balance sheet of trackable assets as carefully as they track changes in income. 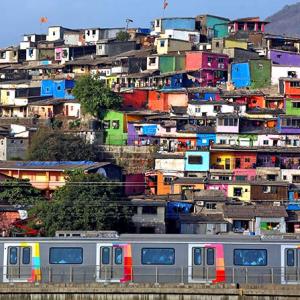