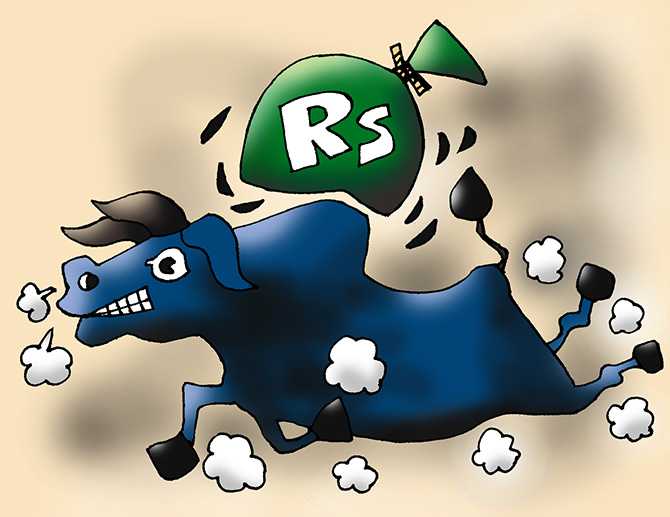 The National Stock Exchange's Nifty 50 index has been running at a price-to-earnings (PE) ratio of 26 for months. This is about 35 per cent above its long-term median levels.

Going by any conventional system, or by India's market history, these valuations are wildly over-optimistic.

Every set of quarterly results season has ended in consensus downgrades. But the market has ignored both poor results and shocks like demonetisation and the goods and services tax.

The underlying reason for the extended bull run is simple: There has been a vast increase in liquidity across a period, while the investible universe has remained effectively the same.

While foreign investors have continued to back Indian stocks, the real driver for the bull run has been a big increase in domestic equity investment.

Mutual funds have seen corpuses swelling through the past two years.

For a large institutional investor, the universe of Indian stocks is small. There's also no point in chasing a micro-cap if the fund has a large AUM.

Most funds are forced to stay within the universe of the top 500 stocks or thereabouts, if they are looking for a current market capitalisation (m-cap) of Rs 2,000 crore-plus.

Indeed, the bigger schemes tend to stick to the top 300 -- the stocks listed in the derivatives segment, plus a few more.

The slicing up of the market into large-caps, mid-caps and small-caps, and the Security and Exchange Board of India's proposal that every fund house have one scheme focused upon every m-cap category could lead to an even narrower perspective.

Anyhow, there's been an effect where more and more money is chasing a limited supply of stocks.

In the broadest terms, India is in an equity bubble.

Bubbles can inflate indefinitely and also burst, with deep corrections.

A slow deflation or stability is the least likely prospect.

The healthiest way for this situation to stabilise would be for business to pick up, of course.

It would take a very sharp and broad-based acceleration to justify the current valuations.

A paradoxical situation could also arise if business activity accelerates. Quite a lot of that AUM is in a 'holding pattern'.

Entrepreneurs running small and medium enterprises are seeing their own businesses moving in first gear. They have parked surplus cash in equity for the time being.

If their businesses start generating higher returns, those assets will be cashed out to expand their own businesses.

So, a pick-up in the SME space could result in a fall in the stock market.

Similarly, a pick-up in housing activity would give the retail investor an attractive alternative to equity.

Another bearish phenomenon could be tired bulls unloading.

If the market corrects, even by a small amount over an extended period, the hot money would start cashing out.

Of course, if there is a pick-up in business activity, foreign portfolio investors might commit larger sums. That would balance a pullback in domestic investments.

It's difficult to assess how much of the AUM is 'hot' and how much is sticky.

Open-end funds hold by far the largest proportion of AUMs.

In theory, there could be massive redemption pressures if sentiment changes.

This change could happen if political instability mounts as the 2019 general election draws closer.