News
Business
Movies
Sports
Cricket
Get Ahead
Money Tips
Shopping
Sign in  |  Create a Rediffmail account
Rediff.com  » Business » How NOT to usher in a cashless economy

Any forced attempt to achieve anything -- however lofty the goal -- will result in distortions and undesired outcomes, note Anshuman Gupta and Karunakar Jha.
Illustration: Uttam Ghosh/Rediff.com Three years is a long enough time to assess the government's initiatives and judge whether the measures implemented were well thought out or populist ones devoid of serious thinking.

The government's most talked about measure was the discontinuation of Rs 500 and Rs 1,000 notes for three stated objectives -- unearthing black money, eliminating counterfeit money and shifting to a cashless economy through digital transactions.

Many analysts have assessed the government's success in regard to the first two objectives.

However, there are not many comprehensive analyses of the third objective and its impact on the Indian economy.

What are the challenges to making transactions in India fully digitalised?

If it is forced, as was the case in India, initially in the absence of full remonetisation, what will be its consequences on the velocity of circulation of money (V), average of each unit of currency changing hands for transactions; effective money supply (V x money stock); and Indian economic growth ?

Under normal circumstances, when the economy is operating below full employment and it adopts cashless transactions gradually, as a result of evolution of the economy and society as a whole, notebandi would have had a favourable impact.

However, in India, though the economy was operating below potential, it was afflicted by twin balance-sheet problems (that is, over-leveraged companies and bad-loan-encumbered banks).

Secondly, it was a forced attempt -- in the wake of demonetisation and without full remonetisation -- to shift to cashless transactions without adequate preparation.

These two normal conditions were missing in the case of India. How the absence of these two prerequisites would have impacted the Indian economy is the focus of this article.

In a normal scenario, when the economy is operating below potential and digitalisation of transactions is being gradually achieved as a result of socio-economic advancement, this exercise would have impacted the economy in a beneficial way.

Any technological advancement in the financial sector reduces the demand for money.

The same thing happened when ATMs were introduced.

For households, there is always a trade-off between holding cash for meeting foreseeable and unforeseeable transactions, and earning extra interest income by parking this money in interest bearing assets.

After the arrival of ATMs, the demand for holding cash was reduced.

This, in turn, increased the velocity of circulation of money.

The same logic holds true in the case of any other financial innovation, including shifting to a cashless economy through digitalisation of transactions in normal conditions.

This would also reduce the demand for holding cash, increase the velocity of circulation of money and increase the effective supply of money for a given gross domestic product.

Under normal circumstances, if the economy had been operating below potential, it would have worked like a stimulus.

Cashless transactions are also going to yield savings in the expenditure on printing and transporting currency, besides reducing the possibility of generation of black economy.

However, these benign outcomes are true only in normal circumstances.

In reality, both conditions were conspicuously absent.

First, it was a forced attempt to shift to digitalised transactions, leading to unintended outcomes.

The demand for money got reduced as a result of the discontinuation of Rs 500 and Rs 1,000 notes, which were either deposited in banks, or just vanished.

The 'V' also, in this forced attempt, was reduced as a result of reduced transactions in the informal sector, mainly based on cash, and the common people's inability to learn the intricacies of digital transactions which, in turn, reduced the effective supply of money for a given GDP.

All this had a negative impact on the economy, especially the informal sector.

Second, since the economy was plagued by twin balance sheet problems, the formal sector did not compensate for it in spite of their operating below capacity.

The takeaway from this exercise is that any forced attempt to achieve anything, however lofty the goal, will result in distortions and undesired outcomes.

People will then themselves shift to digitalised transactions to maximise their interest income.

Anshuman Gupta and Karunakar Jha are at the University of Petroleum and Energy Studies, Dehradun. 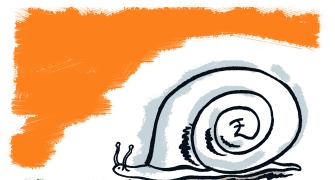 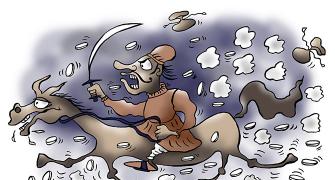