The new MSP would worsen, rather than rectify, the two most pressing problems of Indian agriculture: Wastage of water from all sources and a tendency towards monocropping, says Shreekant Sambrani. “Act in haste, repent at leisure," is an old aphorism. It applies only partly to the substantial revision of minimum support prices (MSPs) of the current kharif crops the government announced recently.

That decision could not be said to have been made in haste, as the Modi government has had four long years to deliver on its 2014 election pledge of agriculture produce prices as per the recommendations of the M S Swaminathan National Commission on Farmers.

Obviously, the delayed fulfilment of that promise has much to do with the general election next year.

No one, least of all this writer, doubts the necessity of remunerative crop prices, but they are by no means guaranteed to mitigate manifest rural distress.

On the other hand, a simple-minded recourse to them without a host of supporting measures could well exacerbate not just agriculture, but the overall economy as well.

That is the clear and present danger associated with the MSP decision.

This price increase has been criticised on many grounds.

The most common economic reasons for the adverse comments are the cost to exchequer of the higher prices and their possible impact on inflation.

These are estimated to be about 0.2 to 0.5 per cent of the gross domestic product and 0.5 to 0.7 per cent respectively.

These numbers are not inconsiderable, but they could be conceivably defended as being necessary to do justice to roughly half of India.

The likely administrative and logistical challenges are also substantial.

The MSP may well remain just a number if the government or its designated agencies do not come forward or are unable to procure the entire crop on offer.

To gear up the creaky public agency machinery for the mammoth task is in itself a major challenge as the history of procurement so far amply demonstrates.

MSPs are meant to protect the farmer against the hazards of price fluctuations and overcome the cobweb of production chasing prices, so that the consumer has a stable and affordable supply of commodities.

But this intervention in the market mechanism does not always produce benign results.

Overproduction of certain commodities has been a major problem for some time now.

The new MSP will unfortunately add to it, as they would make growing paddy relatively more attractive for farmers.

At around 30 million-plus tonnes, the paddy/rice stockpile is already greater than the buffer-stock and public distribution requirements.

With a Rs 200 per quintal increase for the 2018 kharif, the problem of oversupply will worsen, especially if the price rise is passed on to consumers.

Although sugarcane is not covered under MSP, support in the form of state-announced prices of this highly politicised crop has resulted in a supply glut in all growing areas.

The consequences of overproduction of paddy and sugarcane are particularly grievous.

Remember, India uses between 5,000 and 6,000 litres of water to produce a kilogram of rice. Sugarcane has an equally prodigious thirst.

The growing rice and sugar stocks and their insufficient or improper storage would lead to mounting pressure for their quick disposal.

Prevailing international rice and sugar prices being lower than the domestic prices, their exports would in effect be distress sales, causing further expenditure.

More alarmingly, that would mean the export of our precious water at a loss.

The new MSP would worsen, rather than rectify, the two most pressing problems of Indian agriculture: Wastage of water from all sources and a tendency towards monocropping.

This is especially pronounced at present.

The recent NITI Aayog report on water scarcity in India paints a grim but very realistic and accurate picture.

Since the government does precious little by way of insisting on localised effective water harvesting and use measures as integral part of the support measures, the wasteful use of water will continue unabated.

Punjab Chief Minister Amarinder Singh observed during his earlier term in office that his state had become a contract grower of rice and wheat for the Food Corporation of India.

He strove hard to encourage other crops, but could not counter the lure of MSP.

The new MSP regime would spread the malady of dependence on a few crops to other areas as well, nullifying crop diversification as risk-spreading strategy.

Plans are afoot to rationalise power tariffs to discourage the use of deeper tube wells. Whether they will ever fructify remains an open question.

One hand of the government, it seems, wants to undo what the other aims at!

I have grown long in the tooth repeating that the peasantry suffers acutely from an income-deficit syndrome.

The mounting farmer protests of the last two years, including the long march earlier this year and the (ineffective) strike in June provide eloquent proof of this assertion.

Even Dr Swaminathan says that remunerative prices are just one means to achieve higher farm incomes, not sufficient by any stretch of imagination.

In its haste to appear to be doing something to relieve the very real agrarian distress, the government has assumed, wrongly, that higher prices would automatically lead to stable and rising incomes.

In the process, this latest intervention will most likely cause further distortions, albeit possibly unintended.

Is there a way out at all? 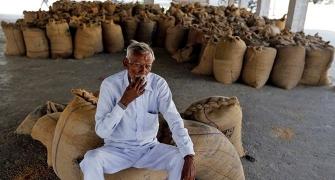