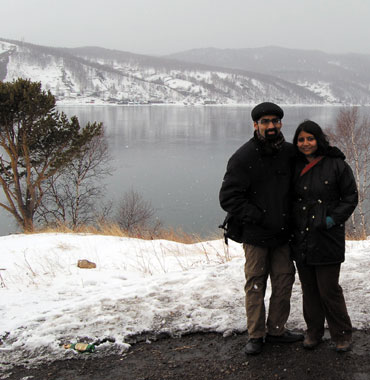 Anirvan Chatterjee and Barnali Ghosh look back on their Year of No Flying.

San Francisco residents Anirvan Chatterjee, founder, BookFinder.com, and Barnali Ghosh, a landscape artist, made a conscious decision to reduce their carbon footprint, even living 'car-free in a dense urban community.' But about three years ago they realized that their carbon footprint was bigger than that of 90 percent of Americans. The culprit was air travel.

The couple decided to correct this. They set out on a Year of No Flying September 15, 2009, and travelled the world by container ships, ferries, trains and buses. They relive their journey in an e-mail exchange with Monali Sarkar.

How often did you fly before becoming a part of the project?

We'd fly to India every year to see family, and take about two to three additional domestic flights, but with very little awareness about the enormity of the carbon emissions generated. Over the years, our families have lived in India, Canada, Nigeria, Oman and the United States; the availability of seemingly cheap aviation made those choices possible.

Aviation has always seemed clean and modern, but it's actually responsible for 4.9 percent of the human impact on global climate. Our two tickets from San Francisco to India have the climate impact of driving a car for two years. Every additional flight we choose to take is a very tiny attack on India's natural weather patterns.

We grumble about the cost, but don't pay for the environmental consequences the poorest Indians do. India is at extreme risk, as the number 2 country in the world most vulnerable to climate change from 2010 to 2040.

Changes in rainfall and temperature can have catastrophic impacts on cities and agriculture, as we saw with Pakistan's recent floods. Cross-border terrorists can't make India's crops fail, but climate change can. Sadly, we play a part in that process. 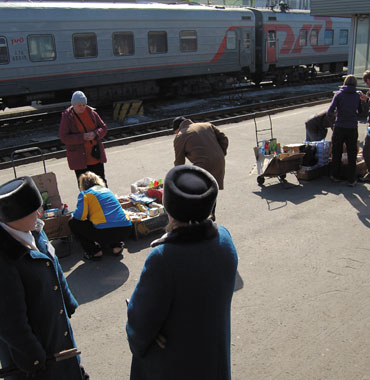 Image: Taking the Trans-Siberian Railway from China to Ukraine.

Where and when did your journey begin and where all have you been?

We took a year off to try to travel around the world without flying, experiencing lower-carbon travel, while exploring local environmental and climate change issues. We started with a road trip from our home in the San Francisco Bay Area to the port of Seattle, where we caught a container ship to Japan.

From there to China, across Southeast Asia, India, and Bangladesh, then back to China, where we took the Trans-Siberian railway to Russia and Ukraine, ferries to Turkey and Italy, trains across Western Europe, a container ship back to the US, and finally, buses and Amtrak back to the West Coast.

We're now total converts to the joys of slow green travel taking fewer trips, staying longer and making them mean more. The journey is the destination. Image: Beginning the journey back home across the Atlantic by a freight ship.

You have said the Trans-Pacific and Trans-Atlantic crossings were particularly memorable. Tell us more about it.

We crossed the oceans aboard cargo ships A cargo ship isn't a cruise ship; people, particularly passengers, are incidental, so you're expected to take care of yourself.

Our first ship took about 10 days to get from Seattle to Yokohama, Japan. It carried about 2,800 containers, and had German officers and Filipino crew.

Our room was surprisingly large, about 320 square feet in size, with separate bedroom and sitting room. Crew members spend three to six months at a time on board, so rooms are thoughtfully designed to be snug, but comfortable, living spaces.

We could look out the window or step outside anytime to see the ocean. We spent our days reading, writing, talking, eating, looking at the water and playing table tennis, free of distractions like the Internet.

It was delightful, a detox from our busy lives, and absolutely the opposite of transoceanic flight with all its hurry, security theatre and cramped antiseptic spaces. We could go up to the bridge any time and we even got a tour of the enormous engine room.

We'd worried about seasickness, but it wasn't an issue. There was a day when the ship was rocking heavily, worse than an airplane in heavy turbulence.

Of course, unlike a plane, we weren't strapped into tiny seats. We'd get up, take a shower, have breakfast, etc. all the normal things people do during a day.

Our ship across the Atlantic left from Antwerp, stopped in Liverpool, and arrived in Pennsylvania 10 days later. It was a smaller ship, but we loved the fact that it had several Sri Lankan crew members, including the head cook, who asked us if we wanted Desi food. Of course we said yes. We enjoyed sailor-style rice, curries, and Papadum as we crossed the Atlantic. 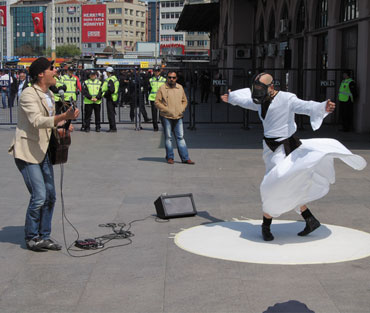 Image: A whirling dervish wearing a gas mask, at an environmental protest in Istanbul. Anirvan and Barnali were in Turkey when activists there gathered to commemorate the 24th anniversary of Ukraine's Chernobyl disaster.

Which part of your journey has been the most difficult?

Deciding to do it was probably the most difficult hurdle. Taking time off to travel was a dream, but actually doing it takes a lot of preparation, both logistical and psychological.

It costs significantly less than one would think, but we kept worrying about what it would mean to get out of the rat race for a year and didn't enjoy having to think about health care, visas and tickets.

But what ultimately made it worth it was that we came back inspired and better-educated, having gotten first-hand perspectives on global climate justice issues everywhere from rural Bangladesh to the German parliament.

Have your family and friends followed your journey; are they taking tips from you?

Yes, we've been blogging about our journey and sharing what we're learning along the way at www.YearOfNoFlying.com. 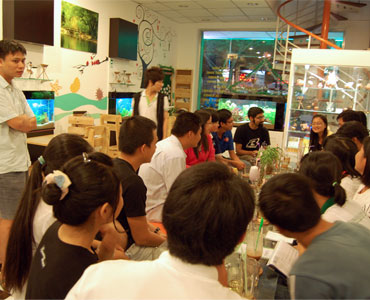 Image: Anirvan, at the back end of the left row, meets youth climate activists in Ho Chi Minh City, Vietnam.

Are you looking forward to the next time you board a plane, or do you cringe at the thought?

We'll be flying to India for Barnali's brother's wedding, and we're definitely not looking forward to the travel. Aviation invariably means long waits, security headaches, worrying about being mistaken for a terrorist, middle seats, jet lag, plane food and jetting through the world without seeing any of it.

What advice would you give to people who are short on time yet want to travel without leaving behind monstrous carbon footprints?

If you were short on cash and wanted to travel, you'd probably consider delaying or avoiding trips or looking for cheaper substitutes. Carbon footprint reduction works the same way.

We're not ready to give up flying entirely, but we're doing three things to help. 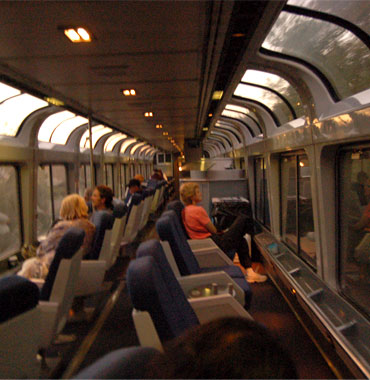 Image: By train across America, in Amtrak's observation car.

Second, we're investing in alternatives. We're evaluating giving our families in India a Skype video-chat appliance, so we can see them more often without needing to fly.

Third, we're supporting movements for just systemic change. One easy way to start is by joining Greenpeace; even donating $30 (1 percent of the cost of our flights to India) makes a difference.

We also recommend signing up for free with Transportation For America (www.t4america.org), which is working for a national green transportation plan, which would help boost the economy while reducing carbon emissions.

There are local climate action and climate justice groups everywhere. Search www.350.org to find one near you.

While in India we were very inspired by the work of the Indian Youth Climate Network.

They not only raise awareness about the causes and impacts of climate change, but also work to find practical local and international solutions.

Some generations ago, millions of Indians worked together to win independence for Britain. We can do the same today to free India and the world from deadly climate impacts, and show leadership in the development of a more sustainable way of life.