Sign in  |  Create a Rediffmail account
Rediff.com  » Getahead » IN PICS: The festival of lights from around the world!

IN PICS: The festival of lights from around the world! Image: Illuminated sculptures of cloaked figures in red surround one that is seated outside the Reichstag as part of the Festival of Lights on October 14, 2013 in Berlin, Germany. Landmarks across the city are illuminated in colors and patterns in the annual Festival of Lights that always takes place in October.
Photographs: Sean Gallup/Getty Images

As India is all set to celebrate Diwali, we take a look at how other cultures celebrate their own respective festivals of lights.

Diwali is upon us all. Each year, Hindus celebrate the festival by lighting up their homes and lives. Probably India's most important festival, Diwali is the time when almost every Hindu home has a light on its doorstep and a lantern on its window.

Light has always been a symbol of hope and happiness and different cultures in the world have their own festival of lights.

As part of the festival between October 9-20, Berlin's world-famous landmarks, buildings and sites are illuminated.

For nearly two weeks, numerous events transform the German capital into a sparkling metropolis that attracts over a million visitors.

Last Sunday, marked the end of the ninth year of the Festival of Lights. More here! 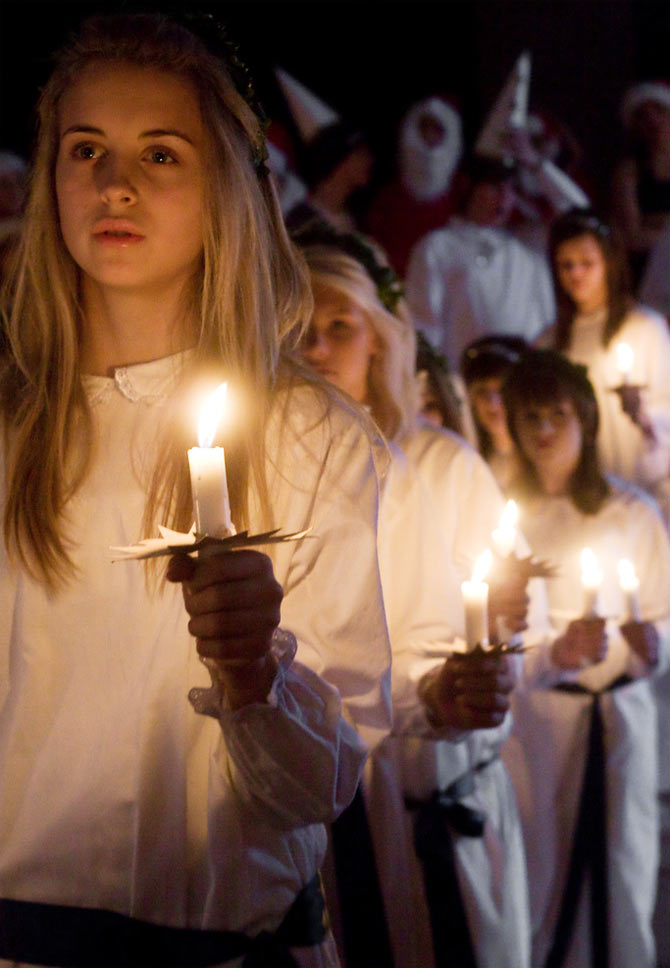 Saint Lucia's Day that is celebrated largely in Italy and Scandinavia on December 13 each year believed to be the shortest day of the year coinciding with Winter Solstice.

While different countries celebrate the festival differently, overall, the celebrations involve processions led by a young girl (who plays St Lucia) wearing a crown of candles and distributing sweets.

In Sweden, traditionally, the eldest daughter of the family plays Lucia though every city and region elects their own 'St Lucias' who then go about distributing goodies in people's homes, churches, malls and old people's homes. 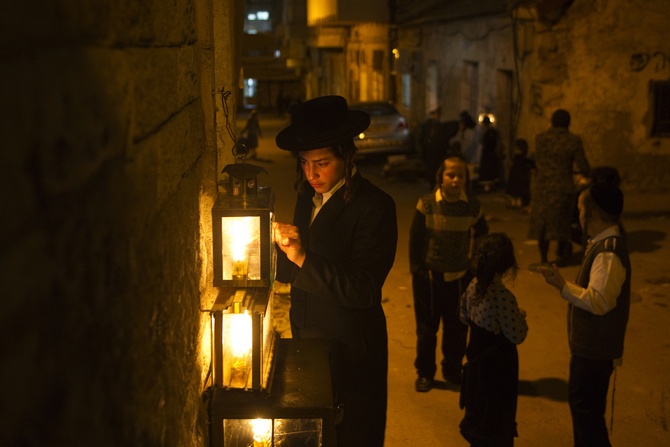 The festival of lights and feasting amongst the Jewish, Hanukkah is an eight-day celebration that commemorates the rededication of the Holy Temple in Jerusalem in 2nd century BC.

Hanukkah starts on the 25th day of Kislev (around November and December) and is observed by kindling of the lights in the nine-branched Menorah or Hanukiah, a unique candelabrum, adding one light for each night. 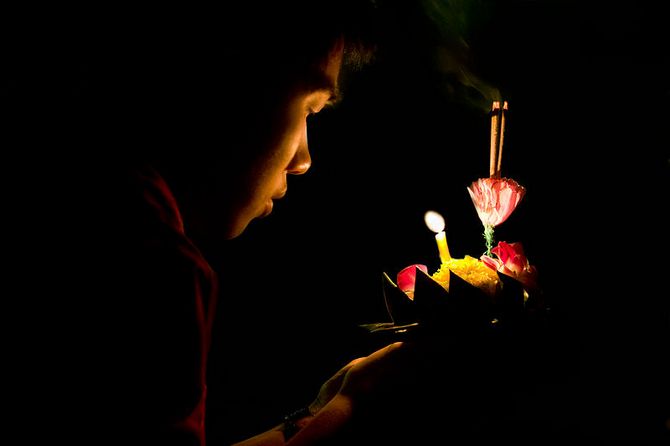 The Thai festival of lights is known as Loi Krathong. It falls on the full moon night of the twelfth lunar month (around November) and is one of the most recognised Thai festival around the world.

Loy can be translated as 'to float' though 'kratong' does not have an appropriate English equivalent though it refers to the lotus-shaped receptacle that holds betel nuts, flowers, joss sticks, candle and coins.

Traditionally a kratong was made out of banana leaves, though this isn't the case anymore.

On the auspicious day, people gather along water bodies, make a silent wish, light the candle and joss sticks and set the kratong to float away.

The flame signifies fulfilment and longevity and it is believed that couples make a wish together on this day stay together forever.

While the legends around the origins of the festival vary -- the most popular version suggests that it is a thanksgiving practice of sorts to the water goddess Phra Mae Kongka -- its practice originally began in the 13th century when a young queen called Nang Noppamas set a boat laden with candle and incense down a river. 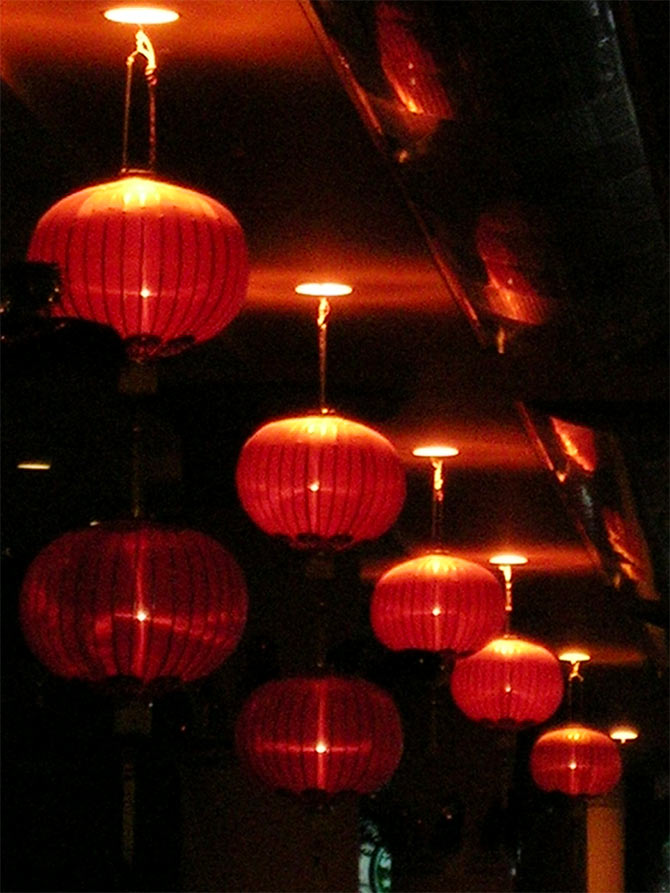 Next up, we have our neighbour, China where the Lantern Festival is celebrated on the 15th day of the Chinese Lunar New Year (around February) and marks the end of the Chinese New Year celebrations.

Several legends are associated with the origins of the festival. One of them relates to the appeasing of Taiyi, the god with 16 dragons, who would decide when to inflict hardships upon the humans.

Another one relates to an ancient warrior who led a revolt against an ancient Chinese king while yet another one is associated with Tianguan is the Taoist god of good fortune.

In ancient times, young women and men were chaperoned out on to the streets in the hope of finding love, though the practice has died a gradual death.

The Festival of Lights in Lyon, France Image: An illuminated facade of a building during the Festival of Lights in Lyon, France
Photographs: Robert Pratta/Reuters

Said to have originated in the 17th century France as a tribute to Mother Mary to prevent the town of Lyon from a plague, the Festival of Lights is a unique Lyonnaise tradition that lasts four days.

The festivities peak on December 8 as every house in the town lights candles on their windowsills and bring the city to life. 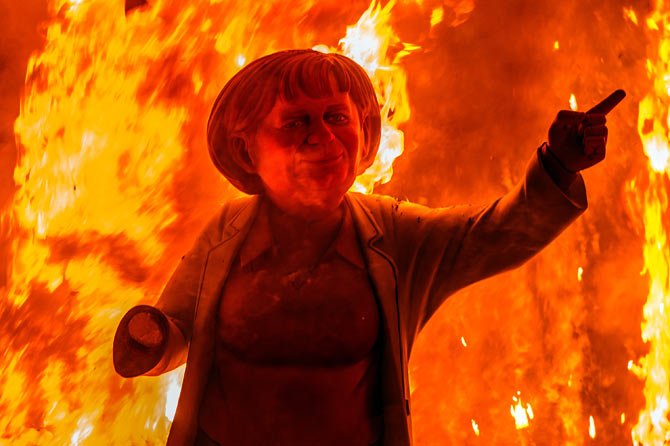 The Spanish Las Fallas is more a festival of fire than it is of light. Celebrated originally in the city of Valencia, Spain as a commemoration to Saint Joseph, the patron saint of carpenters, the festival is celebrated in March by burning of ninots, life-sized puppets or dolls that represent current events or characters.

Ninots are made out of wood and papier-mache and set on fire at midnight as celebrations include parades and bullfights among other activities. 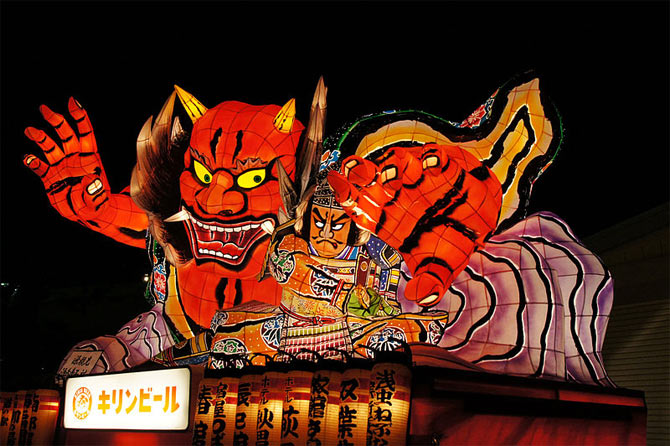 The Japanese summer festival of Aomori Nebuta Matsuri observed in the Aomori Prefecture is one of the largest Festival of Lights in Japan attracting thousands of tourists.

The word 'Nebuta' refers to a float of an illuminated warrior figure that is paraded through the city as dancers perform to traditional music.

Held in August each year, the final night sees a brilliant display of fireworks and floating away of lanterns into the sea.