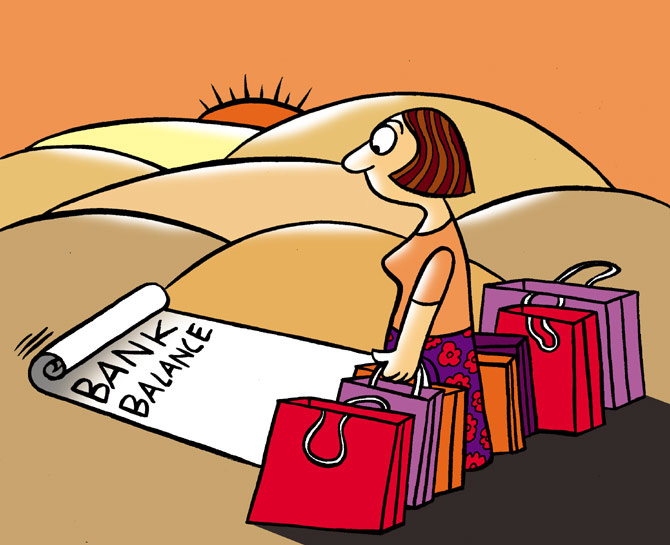 In her fifth entry, Divya Nair shares her bitter-sweet experience of shopping for the wedding sari and tells us why she disapproves the age-old tradition of binge buying.

I'm sure most girls would agree with me when I say that the best thing about getting married is that we get to shop to our heart's content.

Ironically-- and my partner would agree with this--being the certified spendthrift that I am, I always look at my bank balance before I agree to go shopping, fully aware of the risk of buying more than intended and regretting later.

Unlike some of my more fortunate friends who probably never had second thoughts about asking their parents for financial help to shop for their wedding, I have been working with my partner to try and cut down needless expenses wherever we can.

I have seen both friends and cousins unapologetically spend a bomb just on the wedding gown or sari because they felt it was the most appropriate thing to do -- to look and wear the best on your big day.

However, one of my friends who had spent Rs 36,000 on her wedding lehenga two years ago, met me recently and told me that she now regrets her expensive decision.

"I only wore it for four hours in my life," she said.

Since the friend is now mother of a beautiful daughter and has gained sufficient weight, she feels she will probably never again wear the low-waist lehenga she'd bought from a luxury bridal store in Mumbai.

But how do you communicate that to pushy salesmen who refuse to co-operate with you?

The salesman at a Coimbatore shop was surprised when I asked him to show me a maroon silk sari priced under Rs 5,000, which I intended to wear for my wedding.

Some of the salesmen laughed at me when they realised that I was shopping for my own wedding. They convinced me that I would not look like a bride if I chose a sari that cost less than Rs 15,000.

They were even more surprised to know that my aunt had accompanied me to the shop and not my mother and the rest of the family as is the practice down South.

In Tamil Nadu, the bride's parents are expected to invite the whole village to shop for the wedding sari. Yes, they hire a bus to accommodate the more important people.

Even in parts of Kerala, the bride-to-be is always accompanied by at least five or seven women from the family who spend hours discussing the perfect colour and motifs on the sari.

For my cousin's marriage, we spent more than three hours in a single shop because seven of my aunts could not decide whether the colour maroon or brown would look good on her.

Surprisingly, the shopkeepers in Tamil Nadu don't object to this tradition (read ordeal), but they do ensure that only a maximum of 10 people are allowed inside the shop.

The rest of the crowd willingly and patiently wait outside the shop. After the wedding shopping is done, they are treated to lunch and sweets.

I was glad to have been spared the ritual because when it comes to wedding shopping, I strongly believe that too many cooks spoil the broth.

As if splurging on a wedding sari wasn't enough, in Kerala we have this additional tradition of filling the suitcase that the bride will carry to her in-laws' place. It will be stuffed with new saris, salwar kurtas and blingy dresses.

This suitcase, I'm told, is thrown open to display for the guests and in-laws when the bride steps into the new house.

My amma distinctly remembers this incident from her own wedding. Since amma had planned a very brief visit to papa's maternal home in Kerala after the wedding, she had packed only a few daily-wear saris in her suitcase because they were to return to Mumbai the same week.

Unaware of the implications of the 'suitcase' tradition in the village, she did not expect that the rural womenfolk would inspect her suitcase in her absence. She remembers that for the next few days, she was the subject of ridicule in the village.

Even though amma had warned me about the tradition, I have always disapproved of buying clothes and saris in bulk. For two reasons: one, I won't be wearing silk saris and blingy kurtas regularly to work, and two, I know I'll discard them and buy new ones if they did not align with the latest trends.

So, why invest in and accumulate expensive saris and new clothes just to fill up a suitcase?

Although I had aimed for a budget sari, I eventually settled for a silk sari priced Rs 10,000, which was just the colour I wanted and it looked just perfect for the occasion.

I immediately clicked a picture and sent it to my future sister-in-law to show to my mother-in-law for a second opinion.

She instantly liked it and I was glad that my five-hour shopping ordeal had finally come to an end.

My partner did it even faster and cheaper. He bought his traditional wedding kurta and dhoti from a local shop in Ulhasnagar (a suburban town in Mumbai) for a bargain, at Rs 4,500!

He tried four outfits and took less than an hour to finalise what he wanted.

Sharing his logic for the quick decision, he said he'd rather invest in a branded tuxedo for the wedding reception, which he'd wear more often than an expensive traditional costume that would lie unattended in the closet for years together after the marriage.