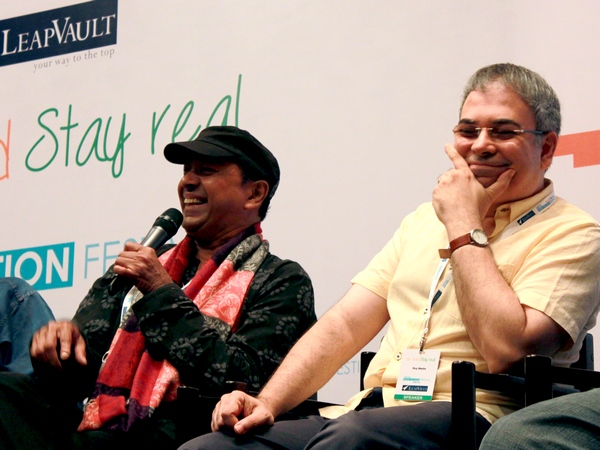 In what was perhaps the most volatile session of the day, the queer panel took questions from audiences on Day Two of the India Non-fiction Festival.

India’s top gay activists and authors came together to talk about their experiences on the second day of the India Non-fiction festival. The session that was being moderated by Shobhna Kumar included Prince Manvendra Singh Gohil, Prof R Raj Rao, Ashok Row Kavi, Roy Wadia and Sridhar Rangayan.

Wadia spoke eloquently of the first time he realised he was ‘different’ and his flight to the US ostensibly to study journalism but more to get away from a society he knew wouldn’t accept him as did Sridhar Rangayan, one of the founder member and trustee of India’s first gay NGO, the Humsafar Trust.

Shobhna Kumar, who was moderating the session, took it upon herself to ensure that they were reaching out to e-v-e-r-y-o-n-e in the audience and put a bunch of young college boys on the spot asking them if they were able to ‘get what we are talking about’.

Kumar’s insistence -- she did so twice -- didn't go down too well with some in the audience even as the boys squirmed in their chairs.

Before soon, R Raj Rao found himself having to explain the terms (by now a fair number of them were being thrown around with panellists attempting to define queer, gay, homosexual etc) and rather professorially beat around the bush for a good few minutes before asking why his novels couldn’t be seen as simply being romances rather than being pigeonholed as gay love stories.

I eventually caught up with some of the boys from the group who confessed that they were indeed embarrassed. They barely spoke English and told me they were ITI students from a college in suburban Mumbai and their teachers had sent them to ‘learn how people talk in public’. By a twist of fate, they’d landed in the session on homosexuality.

“We weren’t prepared to be picked on,” Mayur Kadam told me. He largely spoke in Marathi, his mother tongue, though he seemed to understand English too. “I suppose we have to learn to express ourselves in a group, in English.”

Even so, Kadam and his friends confessed it was an eye-opener of a session. Vivek Mhaske, another boy from the group said that they’d never once come across an openly homosexual person in their life. “In our area if someone is ‘different’, we call him ‘homo’. It’s like an abuse,” he said. “I don’t think we will do that again.

What was truly inspiring was to see Mhaske and Kadam walk up to some of the panellists after the session was over and introduce themselves and eager to be in touch with some of them!

Contrary to that was a young man in the audience seemingly more ‘educated’ than Mhaske, Kadam and their friends who quite shockingly told Sridhar Rangayan that he was ‘felt resentful of your body language’.

Needless to say, his remarks were met with some scorn but also a fair bit of laughter as Rangayan made light of them. 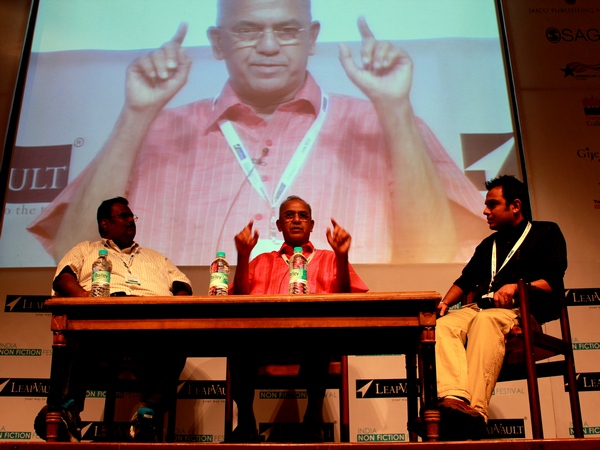 Young cricket journalists were at the receiving end of some serious criticism as veteran cricket columnist Makarand Waingankar spoke about the days gone by. Most of them, he pointed out, were ‘Google journalists’ depending on the Internet for their information rather than having read up on it before writing an article.

“Most modern journalists have no idea of any technique but they’ll know who is having an affair with whom!” he thundered.

Defending the younger lot, Clayton Murzello, Mid-Day’s sports editor said that it would be unfair to simply label all modern journalists as being lazy. “They do work hard,” he said.

However the two veterans got together in their criticism of the BCCI. “The board stonewalls journalists,” Murzello said.

A lot he confessed had to do with the pressures journalists face in getting new stories every day. Waingankar added that during his time journalists and cricketers would sit at the end of the day’s play and chat over drinks. It was an unwritten rule that what was discussed there wouldn’t be printed. “Today everything makes headlines,” Waingankar said. “Journalists aren’t enjoying the game. They walk in at 1.30 pm for a match that starts at 9am!” he exclaimed.

Unsurprisingly, the IPL was at the receiving end of criticism too with Murzello remaking that it was spreading evil in the game. “Sure fixing happens in all forms,” he conceded, “But the glamour and the money that goes into the IPL is making things worse (for the game).”

Both Waingankar and Murzello agreed that there was an urgent need for young talent to be groomed and educated, just like they were.