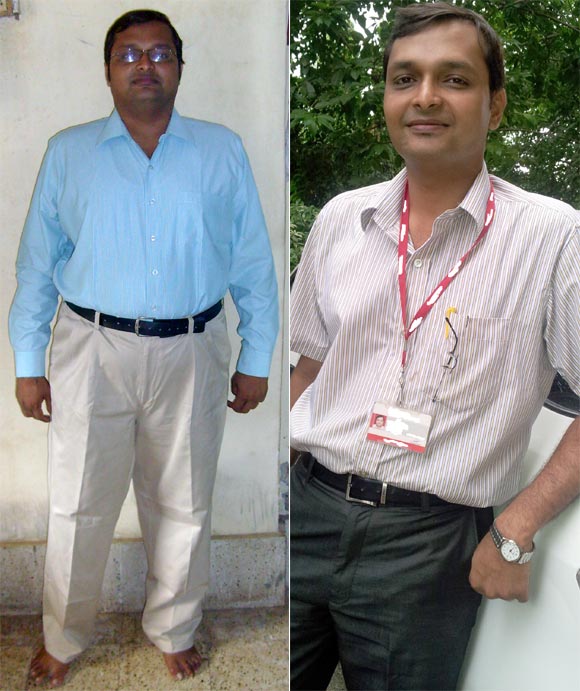 Readers share the stories and strategies behind their weight loss. Today, Bhavin Jitendra Shah from Mumbai tells us his story.

Recently, we invited you to share your diet and exercise strategies with us.

Here is another response from Bhavin Jitendra Shah from Mumbai who lost 34 kg in a year!

I am an IT professional; which also means I am not very physically active. It also didn't help that I couldn't hit the gym because of some physical injuries.

My background : I was always a bulky fellow (weighing around 85-87kgs) but from 2009 to 2011 my weight increased drastically and I now weighed in105 kg (I guess before that I was even 110 kgs but I do not have proof to substantiate that).

To top it, I had an accident in 2005 where I have had to undergo a near-amputation of my hands, my right knee had a missing cartilage and my half of the left ankle bone is missing.

I had consulted nutritionist Swati Chandrasekhar (she practices in Pune and in my company) and then followed her schedule as well as put forth some of the restrictions on myself.

Swati gave me a set chart pattern which was customised to my eating habits (I only prefer Jain food) and she was always in conversation with me if I had doubts they were clarified immediately and that help was indeed useful.

I do not wish to share the chart pattern as different people would behave differently to different diets and I am not a specialist to share it with people and indeed it would be better if people consult nutritionist.

The major points I feel which came out of my dieting were:

In addition to the above points, I have followed the following things which I feel has helped me a lot :

We want you to share your weight loss story with us. Write in to getahead@rediff.co.in (subject line: 'How I lost weight'), with a before and after photograph, if possible and we'll feature the best entries right here!
Tags: Bhavin Jitendra Shah , JVLR , Swati Chandrasekhar , Mumbai , Powai
More
Write a
Comment
Print this
article