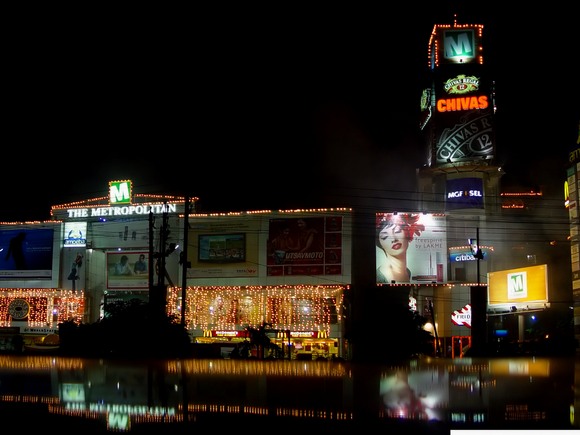 Image: MGF is one of the more prominent malls along MG Road in Gurgaon. Behind the glitz however in Gurgaon lies a dark underbelly
Photographs: Dinesh Pratap Singh / Wikimedia Creative Commons Priyanka

Days after a young girl was abducted and raped outside Sahara Mall on Gurgaon's MG Road, Rediff.com's Priyanka finds that little or nothing has changed along the darkly-lit stretch.

A few minutes past ten and MG Road in Gurgaon is unusually desolate. It is odd because this road in the National Capital Region (NCR) of Delhi harbors some of the most prominent malls and shopping complexes of Gurgaon.

First among these is the infamous Sahara Mall from where where last week a young working woman was dragged into a car around 2 am and was gangraped by seven men. Six of them were arrested the next day.
There are three major malls with places to shop, eat and watch movies, lined one after another on the same road.

The entire stretch of about 800 meters has no streetlights -- the only lights are those of the many hoardings that line the road and of course the shops from glittering malls.

There are fewer cars parked on the road. There is also a posh wine shop on the road, which seems to be the centre of all activity at the time of the day. Young boys are nosily drinking booze.

There are four young girls, hurrying towards the Sahara Mall. All in their early 20s, they work as waitresses in one of the night clubs, Blue Eyes.

In the last few years, this place has become notorious for being unsafe for women to roam freely. 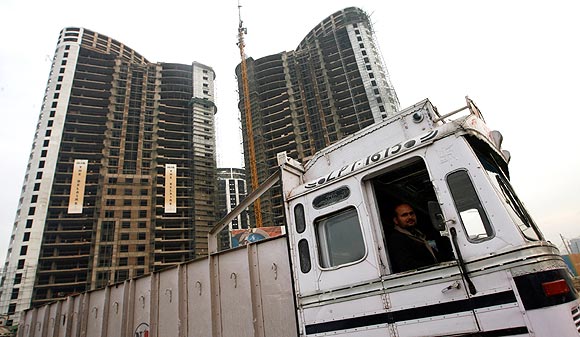 Image: Over the last quarter of a century, Gurgaon has been seeing a huge growth in construction activity. Yet very little is seemingly being done for women's security
Photographs: Adnan Abidi/Reuters

After the recent rape case, the government authorities had suggested that woman should not be venturing outside after 8pm. Understandably, many women protested and held banners at the Sahara Mall asking the government to provide security instead of shutting their movement.

25-year-old Kamini Yadav works at Blue Eyes occasionally. The rest of her friends, Neha, Preeti and Neeta are regular employees of the night club. But even after the incident, they insist that no extra safety has been provided to them.

They travel to Blue Eyes from Rajouri Garden in West Delhi, by Metro in the afternoon, exit the mall at about 2 am and are dropped to their homes in a cab.
"It is very difficult to get out of the mall after 11pm," Kamini says. "Any girl who walks out of the mall at that hour is taken to be easy."

She says that there are about 50 girls working in each of the night clubs, mostly serving, and most have to go through unruly wrath every night.

"But I don't know what we can do," Kamini says. She earns Rs 9,000 she earns each month.
The girls are educated up to class 9 or 10; none are graduates; in some cases they are the sole bread earners; in some others, there is an ailing patient who needs constant medical attention. The reasons are many and few can choose another way of earning a livelihood and so they're stuck.

"We need the money, Kamini says, "So here we are." 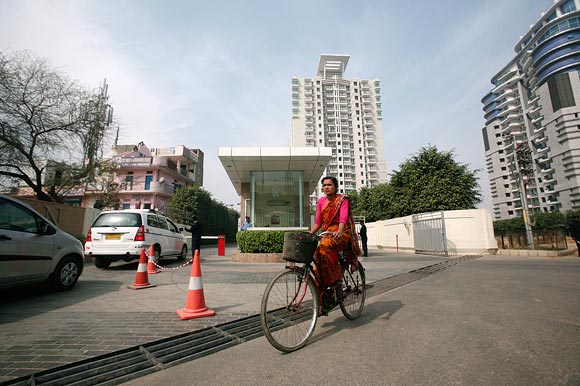 Kamini's friend Preeti tells me that by midnight the place is swarming with about 250 boys as sex workers take to the street
"It becomes very difficult for us," she begins to tell, "Boys often approach us and ask 'Hello madam, chaloge kya? Kya rate hai? (What's your rate?)'

"It happens even if police officers are present," she says. "And the police does nothing."

She once nearly slapped a guy, who pushed her so hard that she hit a nearby railing. "I was shocked at his behaviour," Preeti says. "But now, we simply avoid them.
Even the boys who used to travel with us asked us to avoid (getting into a fight). What can they do if people behave in such a manner," she asks.

She says that on the night when the young girl was forcefully pushed into car and driven away, a few locals had pointed a gun at a girl in another club.

"As long as one is inside the club, there are bouncers who take care of things. But once you are out, you are on your own," Preeti says.

Incidentally, there are no CCTV cameras at the entrance of any of the malls. 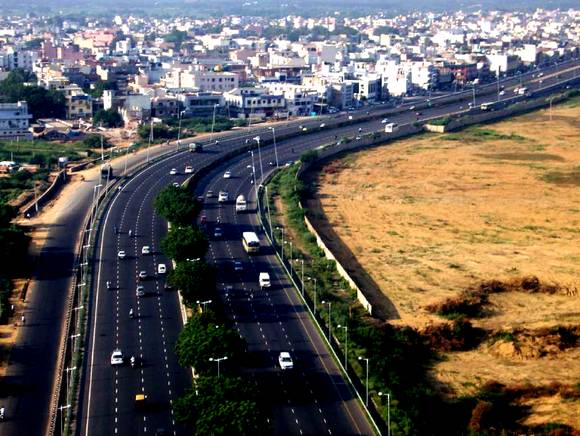 Image: The Delhi-Gurgaon Expressway has increased the speed of traffic to and from the city, changing the face of the suburb for good. Little however has changed in the way the men here treat their women
Photographs: V Malik/Wikimedia Creative Commons

A few hundred meters away is DT Mall. A few college students and others with family are rushing towards it. A movie at one of the cinema halls here is about to begin.

A young girl accompanied by her parents rushes in. She is not aware of what had happened. "I didn't know that a girl was abducted from here," she shrugs and says their cars are parked in the basement parking and people usually drive off. There is no need to be on the open roads.

There are two security guards stationed at the entrance. One of them, Sudhir Kumar says, "There are forty security guards in the mall, and we are capable of providing security in case anything happens inside the mall."

But his promise of providing security dissipates just a few meters from the entrance of the mall. Sudhir steps of the mall and points out at a hedge at a distance which is a stone throw away and says, "I cannot do anything if something happens there."

"What can I do if something is happening on the road?" he asks. "If something happens to me outside of the mall, the company I am working for will not even pay for my insurance." 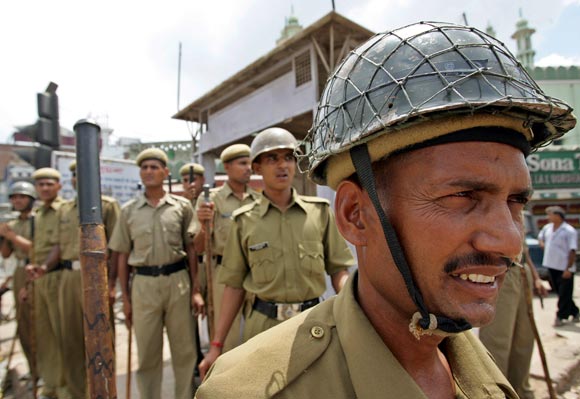 Image: Women complain that little is being done by the police to protect them
Photographs: Adnan Abidi/Reuters

There is however only one brightly lit portion on the MG road. The call center of Convergys is crunched between two malls. This is the only place with street lamps. A group of young boys and girls who have just finished their day's work are sitting out in the open and waiting for their cab to arrive.

"We are not allowed to sit here in open," says 21-year-old Vipul Bhasin. "And we are also not allowed to cross the small garden (which is situated in the open area outside the office building)," his colleague Hansa Shiva adds.

A young employee of Convergys was abducted and raped two years ago. And the company had laid very tough rules after the incident, Vipul says. There is a night club on the ground floor of the building and employees are not allowed to come to the ground floor after 10pm.

"They stop all lifts to the ground floor after ten in the night," says 20-year-old Twinkle Sharma. "We are taken straight to the basement parking from our offices on the first floor." Even today, they had to sneak out of the basement to share a snack in the open. 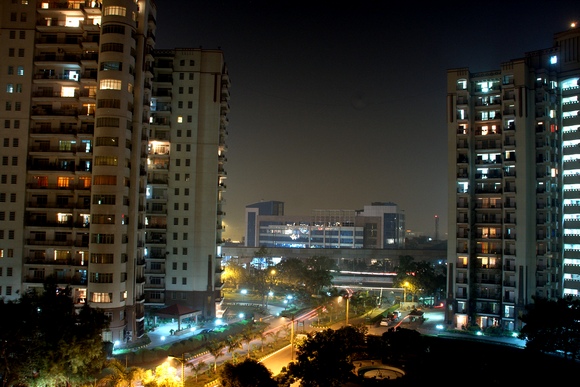 There is also a lone Gurgaon Police van standing near the office building and the Sahara Mall. Assistant Sub Inspector Jayant says that the security has been beefed up after the case.

"There are now two police vans parked in the vicinity, and there are about six woman constables on duty during the night," Jayant says.

Largely they huddle close to each other, and rarely move around to dispel the growing crowds.

Altogether, there are more than five night clubs here. They start opening by 11 pm and within half an hour, a few dozen cars have already checked in. Their occupants turn down the blaring music in the cars and queue at the gates of the Sahara mall.

The police force present somehow appears to be few in numbers to handle the spot which is now getting busier. The parking spots are gradually getting filled, and people on the roads start making their way into the malls.

In the meanwhile, the young waitress at Blue Eyes, Kamini is done with her makeup and just before she begins her duties and serving at the nightclub calls and says, "You should sometime visit the night clubs here and see what all happens in the inside. People get so lewd that it makes it impossible for us to work here."

For Kamini, as for many women working here, this is how it was yesterday and how it will be tomorrow.