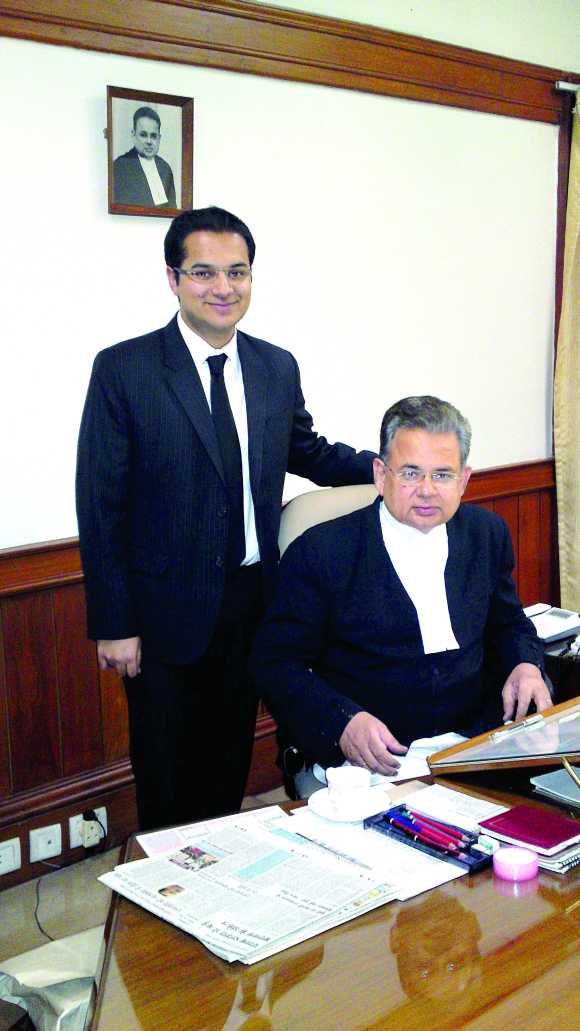 Chanakya Sethi, a student at the Osgoode Hall Law School, York University, Toronto, visited India in April this year to work with Indian Supreme Court's Justice Dalveer Bhandari. Canada's South Asian Bar Association recently honoured him as the 'Student of the Year' along with veteran lawyers at its annual gala. Sethi, who SABA President Rishi Bandhu believes is 'going to be the next leader in our community,' speaks to India Abroad's Ajit Jain about the SABA recognition and his views on the Indian judicial system.

How do you feel getting the SABA recognition?

Tell us about your experience as a law clerk with Justice Dalveer Bhandari of the Indian Supreme Court?

He's the only Judge in the Supreme Court of India who takes foreign law clerks... I went to New Delhi and worked with Justice Bhandari from April to May, six to seven days a week, logging about 12 hours a day. The judge is a very busy man and takes his responsibilities very, very seriously. That trickles down to people who work with him.

The highlight of my experience was the opportunity to work on the Right to Food litigation. It had been going on for over a decade... There are many aspects to the claims, but the basic claim is they are seeking the right to food under the Indian Constitution for India's poor. The figures on hunger and child malnutrition are staggering. I think this would be more accurately stated as one of the fundamental challenges India now faces. My responsibility was to help Justice Bhandari in some of the research that he was conducting... As a young law student, it was truly a privilege to participate in search for what might be the answer.

There will be no decision in the case for a very long time. I helped the judge primarily with what's called an interim order. One issue on which I spent time working on was how do we determine what the appropriate poverty line is in India; food subsidies in India depend on whether you are below the poverty line or not... The Planning Commission has its numbers and the states have their numbers. Several expert commissions earlier appointed to determine this have given their numbers.

I worked for Justice Bhandari helping him determine the difference between these numbers. My findings were the number of people who would qualify under the programme depends on which methodology one uses, so there has been no order as yet as to what methodology one uses...

In one of the interim orders, the court asked the government to justify why it was using a particular methodology in the face of all these other alternatives. It was very gratifying for me to be part of a process that sought what the poverty line is and asking the petitioners and the government to offer explanations as to what the right methodology should be.

What is your take on this subject?

What the court has identified is there is not that understanding yet. The interim order sought to achieve some agreement between the parties, as you can't have different sets of government coming up with different numbers... If you have people bickering about what the number is, then you can't even decide whom you are going to help.

How many people are getting food from the Indian government?

The current numbers that the government has been using about the percentage of people below poverty line is 27.5 percent, which is roughly 59 million families (considering an average family size of 5 to 6).

This number is based on two things -- a caloric anchor and the inflation data, which was set in 1973: 2,400 calories for rural population and 2,100 for the urban population.

Some of the criticisms leveled against the government's methodology include the argument that the inflation data used has been insufficient and... the data produced today is no longer reflective of the actual situation...

Do you believe the Indian Supreme Court has become proactive in trying to safeguard the social rights of the people?

While I haven't grown up in India, I do have a cultural affinity to the country; I have my extended family in India.

It was fascinating for me to see the Supreme Court grapple with the challenges and try to understand how it tries to adapt to circumstances and... how distinctly it has evolved to adapt to the country.

Do you wish you had more time in India?

It was tremendously important research work and I am grateful for this opportunity. However, one month is just a glimpse into a very, very long story. As I said, the case has been going on for over 10 years and is likely to go on for several more.

I tried to take the full measures of what one can learn in one month, which was an understanding of how India and Canada share a common history. You look at the two Supreme Courts in Canada and India -- they became the final resort for the justice system in 1949 and 1950. These are two judicial systems that have a common parentage and have grown up together, but the two countries have profoundly different social challenges.

As a student of law, it was fascinating for me to observe how the Indian Supreme Court is trying to do justice in its own context.

I am very, very excited about going to the Supreme Court of Canada. It will be a different experience, as I will work in Ottawa for one year versus just one month in the Indian Supreme Court. It will be an opportunity for me to see our highest court as it grapples with the major legal issues facing our country.

The reason I decided to go to law school was to think about how we as a community can achieve a more just society. That's what law is about -- how we relate to one another, how we see ourselves, what values we hold dear. That's what excites me. The study of law resonates with me at a personal level because the law is a search for answers about how we can form a more just society. In India some of those questions are about the right to food. I don't know what the questions will be when I am in Ottawa next year, but I do know that the search for answers to those questions will no doubt be very exciting.