Not worried about diabetes? Perhaps you should be

Diabetes: Why you need to be worried

'IT professionals are getting diabetes at a young age is because their work pattern is different and their stress levels are very high.'

'Those who work in BPOs at night have a very different eating pattern.'

'These youngsters are the victims of globalisation. They do not have the time to take care of their health and they invest all their time in work,' says Dr A Ramachandran, chairman of Dr A Ramachandran's Diabetes Hospitals and president of the India Diabetes Research Foundation (IDRF).

A visiting professor in the division of diabetes, endocrinology and metabolism at Imperial College, UK, he explains why Indians are so vulnerable to diabetes, and recommends some lifestyle modifications to fight diabetes.

With around 67 million diabetics, India is considered to be the diabetes capital of the world. One-third of diabetics reportedly develop coronary artery diseases and 80 per cent of deaths of diabetics are said to be due to this.

The economic burden due to diabetes in India is amongst the highest in the world. Diabetes, heart disease and stroke together will cost us about $333.6 billion over the next 10 years, estimates World Health Organisation. 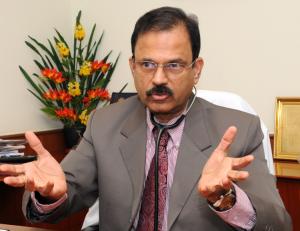 The largest number will be in China; we are at number two. In the United Kingdom, the prevalence of diabetes in the total population is about 7 per cent and there is no urban-rural difference in the UK or the US.

In India, among the urban population, it is 18-20 per cent. This is bound to increase as more urbanisation leads to more diabetics, as diabetes is a lifestyle disorder.

In pre-diabetes the blood glucose level is not high enough to be a diabetic, but it is above normal.

Those who have a glucose level below 200 but above 140, and fasting sugar of 110-126, have a very high risk of becoming diabetics within five years, and we call them pre-diabetics.

Our study, done in September 2013, showed that we could reduce the incidence of diabetes by 36 per cent in working men in India if we made them aware. The best way of reaching people is through mobile phones.

This is called Type 2 diabetes. I've just finished my ward round and saw this young patient who was admitted yesterday. The mother who is only 45 has been diabetic for 15 years. Her son is only 14 years old but weighs 115 kilos. Last year, when I found him to be obese, I had told the mother that it was better that her son did not gain any more weight as he had a risk of diabetes.

The mother didn't want him to be tested because he was young. But when we tested him yesterday, we found that he has diabetes. Imagine, he is only 14 and studying in 10th standard.

Is this a phenomenon that you see only in India?

It is all over the world, but more so in the Asian population and the black population in the United States.

Is lifestyle a reason why young Indians, especially those working in the IT industry, are becoming diabetics in 20s and 30s?

I have found that one important reason why IT professionals are getting diabetes at a young age is because their work pattern is different and their stress levels are very high. Those who work in BPOs at night have a very different eating pattern.

The risk factors for them are the dietary pattern, sedentary life habits and stress. Stress plays a very major role.

How does stress increase the risk of getting diabetes?

In all lifestyle diseases, stress is a very important factor. When you are under stress, your counter regulatory hormones increase the blood glucose.

When you are under stress, your cortisone and adrenaline hormone levels go up, and when stress is happening at a continuous level, it increases the blood glucose levels and your insulin resistance goes up and the effect of the steroids becomes more.

Continuous stress increases your risk for blood pressure and blood glucose. If you have a family history of hypertension and diabetes, then because of stress you will develop these diseases at an earlier age.

'Whatever the work pattern, make some time for exercise'

Yes, fast food plays a major role. As does aerated drinks and smoking because of work related stress.

Among youngsters who come here, a majority are IT professionals. They are prosperous people, they have enough money to eat but their stress levels are very high and their eating patterns are bad.

These youngsters are the victims of globalisation. They do not have the time to take care of their health and they invest all their time in work.

That is why I say India is burning the health of our youth to earn US dollars.

If you can't change your work pattern, what can you do to stay healthy?

Be careful about your eating habits. Reduce sugar and fats and try to eat food at a set time.

Eat more vegetables and at least two or three fruits a day. Avoid too much cheese, fat and sugar. If you do that, there will definitely be a big difference.

If you have a habit of eating one sweet a day, and if you stop that, you are stopping it for 365 days a year, and the effect of that is very far reaching.

Even minor changes in your food habits or physical activity will have a tremendous effect in reducing your blood pressure or blood sugar.

The second thing is, get enough sleep.

And the third thing is, whatever the work pattern, make some time for exercise.

Get up from the computer at least every two hours and walk around. Sitting in one place can cause stagnation of blood even in your veins. Sitting for more than three hours in one place, whether you are driving or sitting in front of the computer or taking a flight, is not good for anyone.

'Meditation with yoga can reduce your stress levels'

What symptoms should one look for?

If you have a family history of diabetes, are overweight (EMI above 23 or 25), have a big tummy, and lead a sedentary lifestyle then test your blood glucose.

Very often diabetes can remain asymptomatic, that is, without any problems. Patients find out they have it when they get a heart attack or a foot infection that doesn’t heal.

What are the complications that can come out of diabetes?

If you do not control diabetes, it can affect your nerves, eyes, kidney function, and you can age faster, and will get all the complications old people get.

Once you get complications, you cannot reverse them, especially eyes and kidneys.

Hathayoga is a kind of isometric exercise and it is good. If you combine meditation with yoga it can reduce your stress levels.

Continue your yoga exercises but you can combine that with some aerobic exercises.