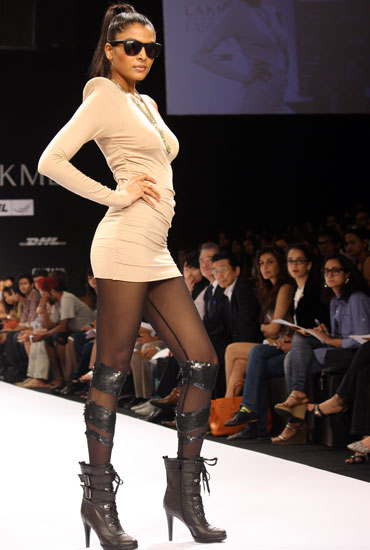 Image: A creation from deux A by Anna-Liza Ganguly and Anita Walia
Photographs: Rajesh Karkera

Lakme Fashion Week's spring/summer installment opened with a showing by six GenNext designers who took the proven path of sophisticated and sexy instead of creative overdrive. Take a look.

We start off with the works of Eurasian duo Anna-Liza Ganguly and Anita Walia and their label deux A.

The collection, called 'Samo was here', is inspired by iconic American artist Jean Michel Basquiat and legendary silver screen siren Joan Crawford. As a result, the styles were a mix of the street art of the '80s and the Hollywood glamour of the '30s.

Seen here is a hot beige mini, teamed with stockings, boots and glares for effect.

Watch the GenNext showing on video.

In their own designs 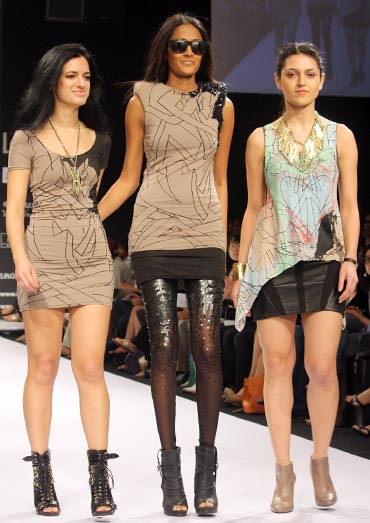 Image: Anna-Liza Ganguly and Anita Walia with Surelee Joseph (centre) in one of their deux A designs

Anna-Liza Ganguly and Anita Walia take to the ramp with Surelee Joseph in their showstopper, which is also short and hot, sporting rather Lady Gaga-esque contours at the shoulders! 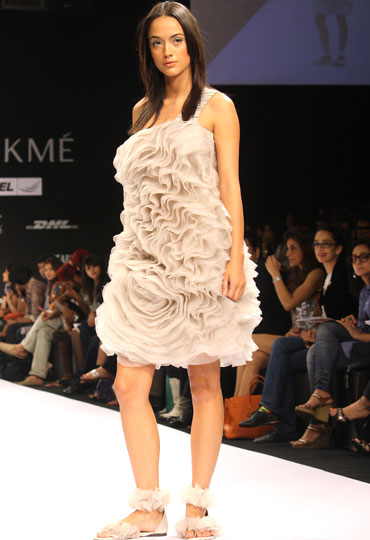 Next we have the feminine flair of newcomer Deepti Pruthi, who opted for big, beautiful garments to make a statement. Seen here is a one-sided ruffled number, complete with matching flats! Very pretty. 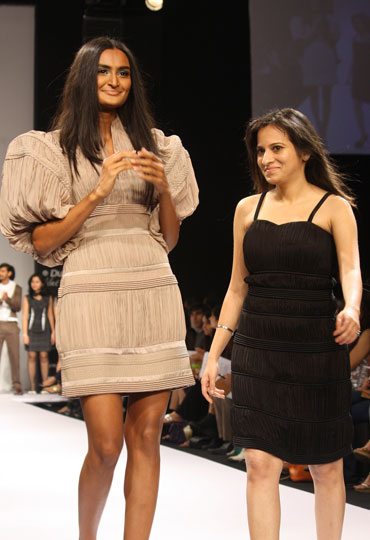 Image: Deepti Pruthi with her showstopper

The designer's romantic flair comes to the fore with her showstopper, sporting large sleeves and perma-pleats. She steps out alongside looking confident, as well she should. 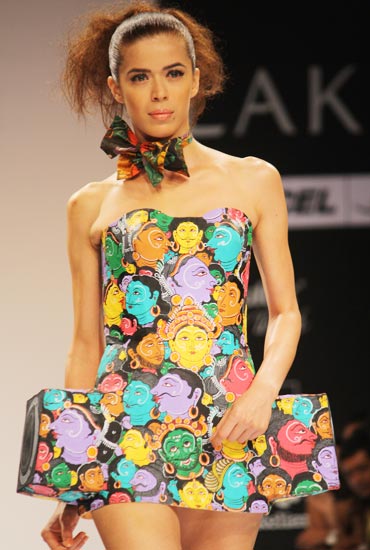 First-timer Manas Dash's 'Modern Tribe' line was inspired by his love of Western music (considered taboo when he was a child) and Pattachitra, an ancient method of painting from Orissa. These paintings are inspired by Indian mythology, nature and animals.

The fusion of these two unique themes resulted in outfits such as you see here -- a box dress replete with Pattachitra paintings in vibrant colour and speakers at the hips! 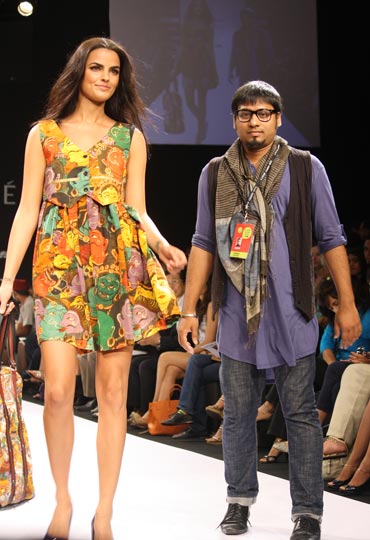 Image: Manas Dash with one of his creations

Dash steps out alongside one of his other dashing numbers -- a digital print waistcoat worn over a matching cotton silk dress. 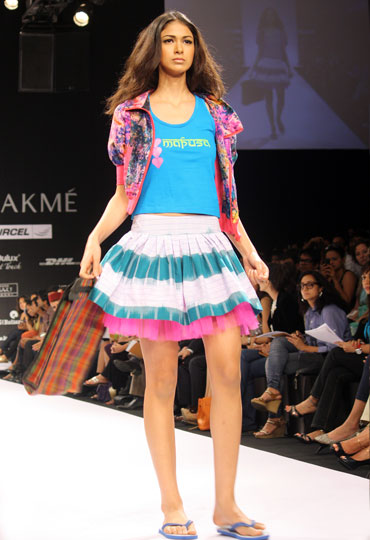 Goa-based designer Miriam Strehlau opted for the quintessential summer vibe, showing off garments that were chic, flirty and wearable like this layered skirt and jacket, worn over a cotton tank. Flipflops and a chequered bag finish off the look. 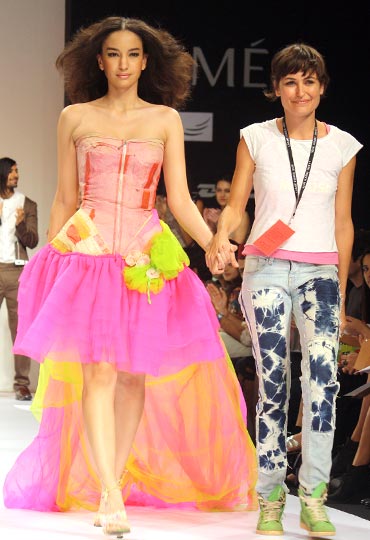 Image: Miriam Strehlau with her showstopper

The designer steps out alongside her best effort, a pink and yellow corset-and-tulle affair complete with train. 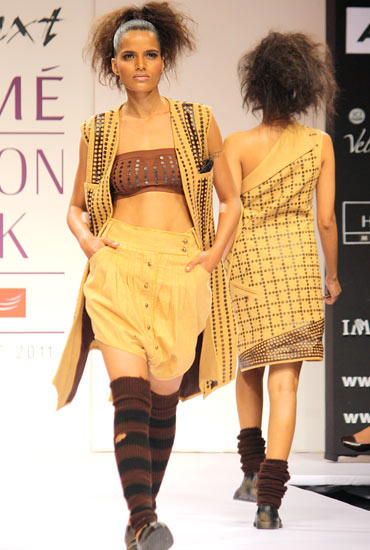 Blank Spot. That was Shivaji Dutta's collection at the showing -- a tough, edgy line of garments for those who like to stand out in a crowd. How could you not in this button-down skirt, distressed leg-warmers and bandeau bikini? A sleeveless jacket finishes off the look. 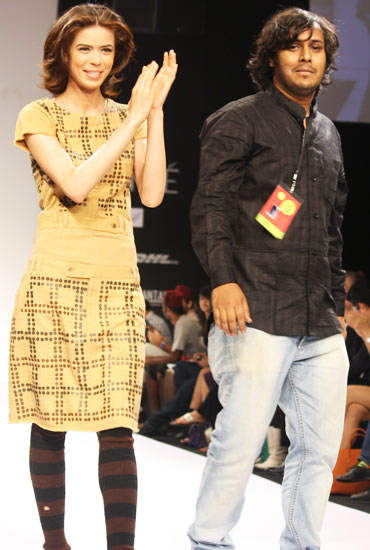 Image: Shivaji Dutta with one of his creations

The dress he stepped out alongside on the ramp was considerably more toned down, while still eye-catching. 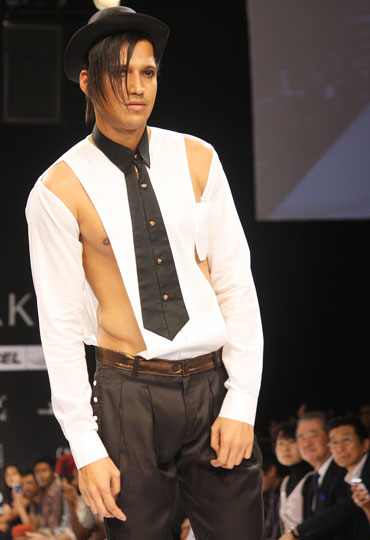 And finally, it was the turn of twosome Timsy and Siddhartha with their menswear line. Model Acquin Pais certainly looks cut-up in this quirky shirt without side panels! 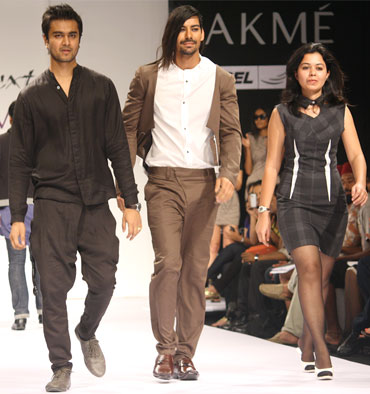 Image: Siddhartha and Timsy with one of their creations