Don't worry! This is safe! 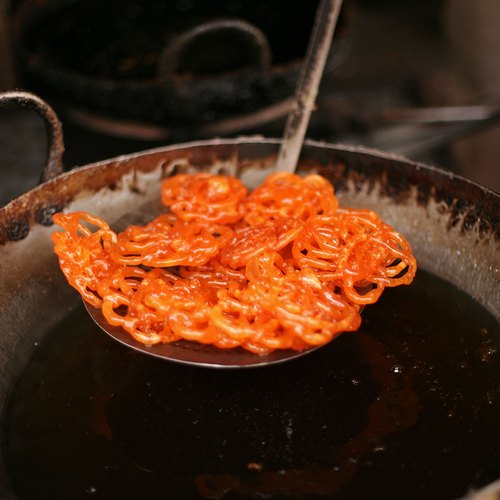 Image: Charmaine O'Brien, the author of the recently-released The Penguin Food Guide to India says street food in India is safer than in other tourist destinations. Pictured here are jalebis being made at a streetside vendor. (Used here for representational purposes only.)
Photographs: Mark Kolbe/Reuters Natasha Chaku

Before you write off Indian street food as unhealthy and unhygienic, you should read this!

Dispelling the common misconception that street food available in India is 'unhealthy and unhygienic', a well known Australian culinary historian has said that she found street foods safer than restaurants catering to tourists.

Charmaine O'Brien, the author of the recently-released The Penguin Food Guide to India, was talking during a discussion at the University of Melbourne based Australia India Institute (AII).

She said the thousands of small regional food vendors or hawkers across India mostly sold freshly cooked meals using fresh ingredients during her culinary tour to the country.

However, she suggested dodging Delhi belly after eating street food in India could vary from person to person and that one should follow their own instincts.

Her latest book, launched earlier this year at the Australian High Commission in New Delhi, is the first comprehensive documentation of Indian regional food and could be read as a literary reference work on Indian food history and culture.

The book, a result of four years of extensive research, has illustrated evolution and development of regional cuisines across India.

Elaborating on Indian food cuisine and culture, O'Brien said Indian regional food was most complex and offered a diverse cuisine unlike known to outside world.

"Indian food is laden with history, culture, religion, economic conditions as well as weather," she said.

Even trade affected the development of Indian cuisines, she said adding, "In Madurai, the Chettinad cuisine has expensive spices like fennel, coriander, clove, cinnamon which reflected that people were wealthy and trade happened,.".

"In a desert like Kutch, there was an extensive use of millet as it was locally grown and was fast to grow so the Kutchi cuisine developed with very limited ingredients which were easily available there," she said.

"People of Kutch were mainly animal herders so they produced and used dairy products like Ghee which also suited the climatic conditions," she said.

O'Brien said that there were many regional sweet dishes where traces of Middle eastern origin could be found, apparently from Arab traders who came into India, she cited.

"There are different varieties of Halwa similar to Turkish delight which probably evolved because of Arab traders there," she said.

O'Brien said despite enormous variety of Indian food across all four corners, outside India including in Australia there was a very limited knowledge about it.

"Indian Restaurants and eateries overseas have been mostly serving similar dishes like Chicken tikka or Spicy curries that has reflected that India had a homogeneous national cuisine," O'Brien said.

Do you agree with Charmaine O'Brien?

Don't forget to post your comments on the Discussion Board below!