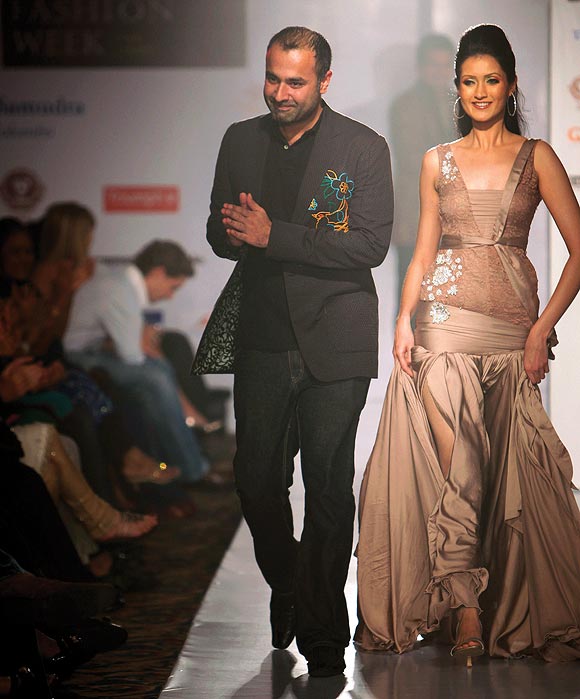 Image: Pakistan fashion designer Deepak Perwani (L) acknowledges the audience at the end of his fashion show as part of the Colombo Fashion week in Colombo February 19, 2009.
Photographs: Nir Elias/Reuters

At the Lifestyle Pakistan trade exhibition that concluded in Delhi on Sunday, one stall stands out from a distance for just its name -- Deepak Perwani, a Sindhi Hindu from Karachi, who spoke to Shivam Vij about the common strands that run between the two estranged neighbours.

This was the first of its kind exposure for Perwani outside the Indian fashion circuit, of which he has long been a friend and fellow traveller. The humble Perwani, though, has long been used to facing Indian surprise. "People keep asking me, 'Oh you guys didn't migrate?', 'How are you treated there?' and so on. The questions show a lack of awareness." Perwani is part of Karachi's flourishing Hindu community, which is small but visible and influential even today. One lakh of Karachi's 1.3 crore population is Hindu.

"India and Pakistan have more in common with each other," he says, "than any two countries in the world. Our food, dress, habits, language, everything. We are similar -- and yet so different." What are the differences? The two countries have had a different political trajectory, he explains. "Just look at cinema, which in Pakistan died and is now reviving. Bollywood, on the other hand, is so big and flourishing." India's booming economy also gets noticed. "You guys are big and you're going international. I visited Emporio yesterday and it blew me away."

Emporio is a shopping mall in south Delhi where India's top designers have outlets -- and they are all his friends. "We meet each other across the globe because we're part of the fashion scene. We've done shows together in Colombo, Singapore and Bangalore amongst other places," he says. 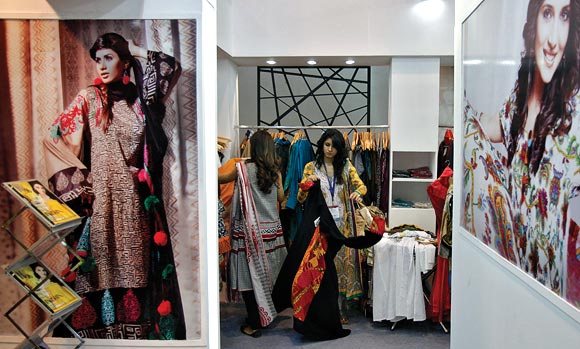 Image: Exhibitors from Pakistan prepare their stall of clothing at the Lifestyle Pakistan Exhibition in New Delhi April 12, 2012. From gourmet chefs to fashion houses showcasing muslin suits on the catwalk, Pakistan will unveil a trade fair in New Delhi on Thursday to reveal a soft side to traditional foe India as commercial ties between the nuclear-armed rivals begin to bloom.
Photographs: Adnan Abidi/Reuters

Both Indian and Pakistani designers draw from traditional motifs -- and Indian designers have an edge here because they have a number of states and regions to draw inspiration from. "In Pakistan it is only Sindh and Punjab that stuff comes out from, not even the other regions," he says.

Pakistan's advantage is in fabric; Pakistan is a textile-based economy best known for its "lawn" -- which around us was the rage at Lifestyle Pakistan. "Lawn is a 100 per cent American Pima cotton that is the singularly best material to wear in the subcontinental heat," he explains, showing me a sample.

"Wouldn't you love to wear a shirt of this fabric in this weather?" He finds that consumers in Pakistan are more particular about fabric whereas in India they are more interested in design. When I mention that many visitors to Lifestyle Pakistan found the some of the Pakistani traditional design to be not in tune with the relatively sober dresses preferred here, he asks me to visit Emporio. "Leading Indian designers try very out of the box stuff these days," he says.

Karachi and Islamabad both recently had fashion weeks. Some years ago fashion shows in Pakistan were presented by the Western press as standing up to the Taliban, which many in Pakistan found irritating. This led to some in Pakistan coining the term FAT -- Fashionistas Against Taliban. But Perwani doesn't care. "See, news is news. You can present it positively or negatively. Every country has problems and India also has problems. It depends on how what you highlight. Pakistan has been having fashion show for aeons and I myself have been a designer for 18 years." 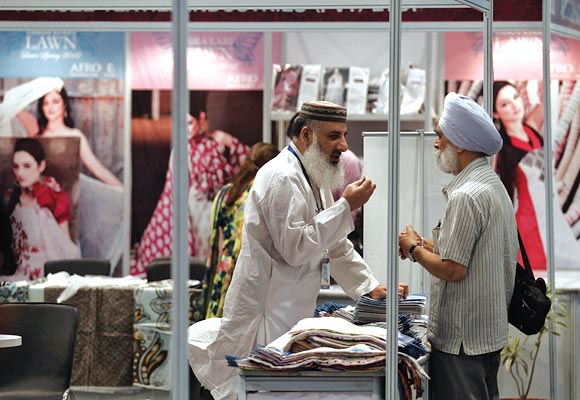 Image: A Pakistan exhibitor (L) speaks with an Indian Sikh visitor at the Lifestyle Pakistan Exhibition in New Delhi April 12, 2012. From gourmet chefs to fashion houses showcasing muslin suits on the catwalk, Pakistan will unveil a trade fair in New Delhi on Thursday to reveal a soft side to traditional foe India as commercial ties between the nuclear-armed rivals begin to bloom.
Photographs: Adnan Abidi/Reuters

Just look at the dresses at the stalls here, he says, just look at the bold deep cut in the dress on the mannequin there. "You think these dresses have been made for the Indian market? No! They sell in our boutiques and people buy them there." I make the mistake of saying that that's perhaps only the elite and he snaps back, clearly not appreciating the word elite.

"There's a market and a segment everywhere. Obviously it is only the rich which buys Rohit Bal outfits and everybody buys FabIndia," he says, pointing to the Pakistani version of FabIndia, which goes by the brand name Khadi.

Perwani is elated at the opening up of India-Pakistan trade and the response at the expo, he says, is only the beginning of Pakistan's arrival in Delhi, "We're here baby!" he says. Are they going to rule us? "Oh not at all," he admits, "you guys are much bigger. I always say India is like the mother-in-law and Pakistan the daughter-in-law."

Sitting next to him is the owner of Orient Mills whom he works with, and for whom his effusive praise has no end. The mill owner adds that Pakistan is like the daughter-in-law who keeps getting thrashed. A Punjabi-looking retail store owner from West Delhi joins us. "Look at him, does he look Indian or Pakistani?" Perwani asks.

'Unlike India, Hindu-Muslim marriage in Pakistan is unheard of' 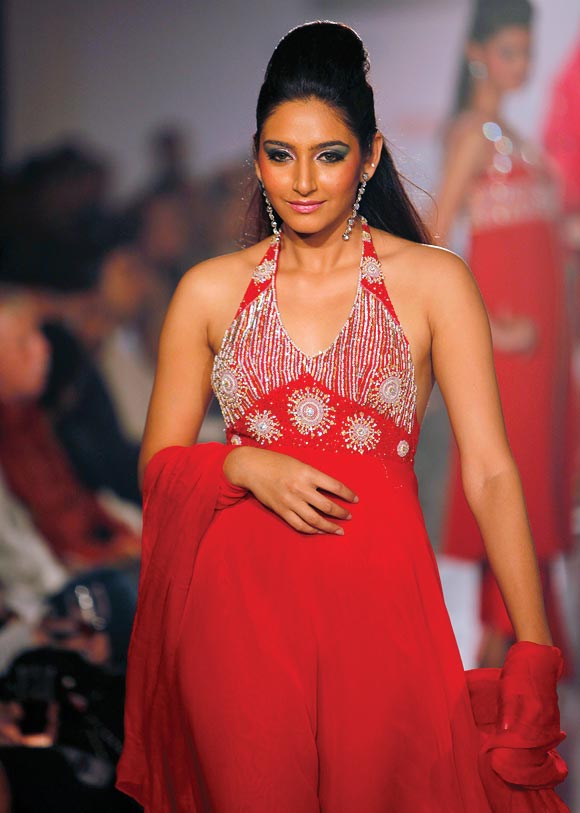 I ask him about Hindus in Pakistan, who are 2.5 per cent of the population, in the context of some recent cases of forced conversion and marriages of Hindu women. "That is an issue," he says, not wanting to say more. "Unlike India, Hindu-Muslim marriage in Pakistan is unheard of. We're a very small minority there." But Perwani himself has not faced any problem whatsoever, big or small, as a Hindu. "I'm too high profile," he explains. It is generally the poor Hindus who face such issues in Pakistan, not the rich ones in Karachi. The 39-year-old Perwani came to India for the first time when he was 8. "From 8 to 15 years of age, my mother, brother and I spent every summer vacation with my uncle in Mumbai. I hated it though, because my mother made sure we got English and math tuition." From a rich land-owning family, Perwani hates it when anyone calls him Seth Deepak Kumar. He'd rather be designer Deepak Perwani, the self-made man.

When people in Karachi ask him about his belonging to a minority, he gives them, half-jokingly, the Sindhi identity card, saying that he's an original inhabitant and not a migrant to the land. He points to the irony of looking at Indian Muslims from Pakistan. "When the Babri Masjid falls they burn temples in Pakistan. This kind of stuff happens all the time, we live in a bad world and we have to move beyond all this and make sure that things like this (the Lifestyle Pakistan event) are not curtailed because of the not-so-good things. Trade is important because it connects people and will become an important vehicle of India-Pakistan people-to-people contact which is a key to changing perceptions."

As I get up to leave, he does too. "Time to burn some cash," he says, as he asks his colleague to accompany him to another visit to Emporio.