Sign in  |  Create a Rediffmail account
Rediff.com  » Getahead » Meenakshi Reddy Madhavan: There's lot of anger around us, especially in Delhi'

Meenakshi Reddy Madhavan: There's lot of anger around us, especially in Delhi' 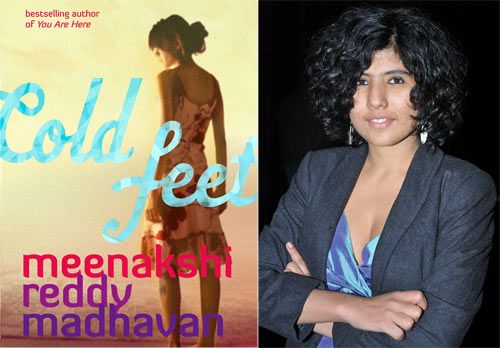 'For the young elite, the problem is that their lives are moving faster than their country would allow them. They may have the fastest cars, but there aren't roads to drive them on, they can wear short clothes, but can't go anywhere in them.'

As for the middle class Indian, the dilemma is the inequality between men and women. The women are moving at a faster pace than men and that's making the men very angry.'

Often described as India's Carrie Bradshaw -- she writes candidly about sex and ways of the urban Indian girl on her popular blog The Compulsive Confessor -- Meenakshi Reddy Madhavan had her debut novel You Are Here published in 2008 and followed it up with Confessions Of A Listmaniac in 2010.

Her third novel, Cold Feet is the story of the strangely entwined lives of five young urban women.

In an interview with Rediff.com's Nishi Tiwari, Madhavan talks about Cold Feet, about how her meeting with Candace Bushnell (the Sex and the City author) turned into a minor disappointment and why she hates the term chick-lit.

You once mentioned on your Twitter feed that you took a vacation to write a book. Did it help you in the writing process?

Yeah, totally! I wrote a bunch of short stories while I was in the hills. One of the stories was titled Cold Feet and that's what this novel is based on.

The awesome thing about being in the hills is that there was no Internet and no other form of entertainment except reading and writing.

I wrote the short stories in two weeks. Then I came back to New Delhi and wrote Cold Feet. It took me around 6, 7 months.

How do you write? Are you a disciplined writer or an erratic one?

I am a very fits-and-starts person. I can write a lot in one go and then I can't bear to look at it for two days.

You tweet and blog regularly. Does blogging/tweeting come in the way of your writing or does it complement it?

I didn't put out that much on Twitter and Facebook when I was working. Primarily because you are so wrapped up in your own stuff that the last thing you want to do is to communicate with other people.

So when I was in Delhi I'd go out in the evening to let out steam if I felt I couldn't write any more for the day. Twitter and Facebook is mostly for when I don't have anything creative to say.

'The Internet can be a powerful tool for change' 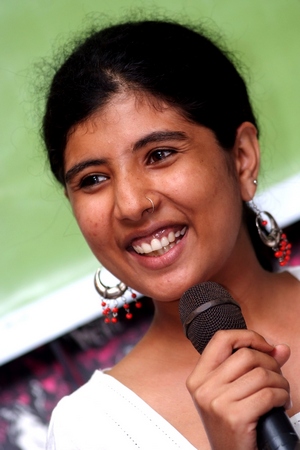 What do you make of this sudden spurt of online activism we witness these days?

I don't know how much good it does to be honest because I was one of those people who was sitting there and talking about rape awareness and women's safety.

While I think probably one percent of my 3,000 followers will look at my tweet and say, 'Well, I didn't look at it that way, she has a point,' I don't really know if it is useful.

I think the Internet can be a powerful tool for change if it is used in an organised manner.

This is the first experience that the Indian youth has had with how social media can be used as a tool for protest and if organised in a better way, it could serve a purpose.

What problems/issues plague the young Indians, according to you?

The young urban elite is quite a different kettle of fish as opposed to the youth who've just come to the city and are struggling to make a life for themselves out here.

For the young elite, the problem is that their lives are moving faster than their country would allow them. They may have the fastest cars, but there aren't roads to drive them on, they can wear short clothes, but can't go anywhere in them.

As for the middle class Indian, the dilemma is the inequality between men and women. The women are moving at a faster pace than men and that's making the men very angry.

The women are venturing out and doing things better than them. The men now feel that they are being left behind in all this.

What would you say are your greatest concerns as a young Indian yourself?

I'm noticing a lot of anger around us, especially in Delhi.

As soon as you arrive at New Delhi airport, you are hit by this sudden wave of aggression and I find that very unhealthy.

People will shout at you if you park your car in the wrong spot or if you accidently bump into them while walking on the road.

You live in two diverse cities -- Mumbai and Delhi. Could you perhaps tell us a little about them?

I love both cities. New Delhi gives me the kind of lifestyle I want right now. I like that everything works, I like that the houses are bigger and that you can drive to places.

But it's only in Mumbai that you can safely hail an autorickshaw post-9 pm. 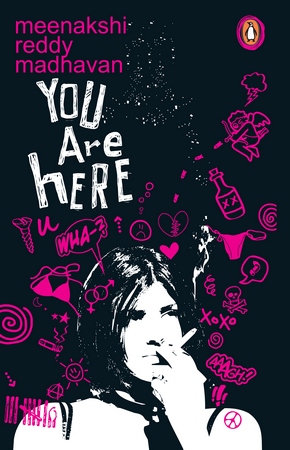 Image: You are Here, Meenakshi Reddy Madhavan's first book that was published in 2008

You've been likened to Candace Bushnell and a review of Cold Feet described you as India's Bridget Jones.

I guess if you write about sex in a big city, comparisons are inevitable. But if I had to, I'd say comparisons with Candace Bushnell would be more accurate because Bridget Jones is more weight-obsessed.

I don't think my characters have ever been concerned about their weight.

You recounted your first meeting with Candace Bushnell at the Jaipur Literature Festival two years ago on your blog. What was it like?

It was awesome. Except that she wasn't Carrie (Bradshaw, the Sex And The City protagonist, fashioned after Bushnell).

(Chuckles) It was really sad. I don't know what I was expecting. I was interviewing her for Marie Claire magazine and I was thinking, 'Oh my god, we are like two sisters!'

But she just talked about work and went away. I guess she was tired from talking all day and walking all around.

(Adds almost as an afterthought in a disappointed, disapproving, tone) And she was wearing sneakers.

Why weren't you at the Jaipur Literature Festival this year?

Because it's so crowded. I've been hearing reports about how it was closed at 2 pm on Friday and how it's completely packed.

There were two lakh people attending!

Crowds have ever had much appeal for me. I'd rather sit at home and read Twitter.

But you've come to be known as the person who likes to go out and socialise.

I know, but it's almost like the older I get, I'm becoming less tolerant of crowds.

I think I'm turning into that writer stereotype.

Of the five protagonists in the book, which one would you say is closest to your heart? Which one was the hardest to write and why?

I loved writing Laadli because of all the Goa bits. It was like I was there even though I was sitting in New Delhi. It was nice.

I also liked writing Shayna because it was nice to slip into a younger person's mind again.

Also, because she's very concerned with the physical and the actual which is very different from everyone I know or everything I've thought about.

I'd say Akshara was the hardest to write because I'd told a similar story -- a girl's unrequited love -- before and I just wanted to make it different from everything else I'd written before. I wanted Akshara to become her own person.

Is it also because it's never happened to you in real life?

(Chuckles) No, it's happened to me too. Believe me.

Do you think the stories in Cold Feet end on a rather abrupt note?

I guess I could have kept it going for a while longer, but I suppose brevity is what I was going for.

Chetan Bhagat has been hailed as India's Charles Dickens. Would you agree?

I think that's possible. If you think about it, Dickens had massive crowds coming to him. He also wrote for a certain class of people as Chetan Bhagat does.

Both of them also have a massive celebrity following. I'm sure we love to hate that statement, but at least Bhagat makes no bones about writing for the masses.

I liked his Two States: The Story Of My Marriage. It was kind of fun.

Who'd you want to play protagonists if one of your books was being adapted for screen?

I'd love Emma Stone to star in it.

Why do you dislike the term chick-lit? It is, after all, a valid genre of writing.

I find it very offensive. I don't see why we need to classify it by gender.

I mean a book doesn't come from your uterus; it comes from your brain.

Maybe these books appeal to women more, but if publishers keep slapping on pink covers and high heels on these books, then the men won't read them anyway.