'I observed Dadu's dharma to heal the suffering' 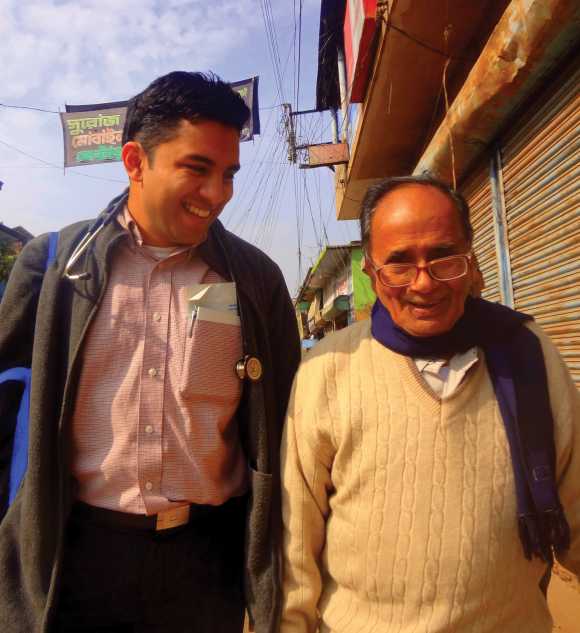 Meet Soros Fellow Victor Roy, whose grandfather's dedication to healing the poor and ailing for over six decades has set him on the same path. This is the final part of the series.

Part 2: Waking up everybody, from Palestine to America

Part 5: From advising Bobby Jindal to law, been there done that

For 60 years, my grandfather Sahadeb Samantha has walked the same path: Between his home to those of his patients and his humble health dispensary near Kolkata," said Victor Roy, accomplished medical student at Northwestern University, social entrepreneur and a tabla player.

'Dadu, as I affectionately call him in my Bengali tongue, began his life's work as a rural physician in 1952, serving in the villages of his youth in West Bengal,' he wrote in an essay for the Paul and Soros New American Fellowship award.

'I spent many childhood summers in Rajhati, where he lives and serves to this day, observing his practices and hearing the stories of his journey. I observed Dadu's daily sense of duty, dharma as he calls it, to heal those suffering from a wide assortment of maladies. Until only recently -- he is now 87 years old -- Dadu travelled by bicycle and foot to care for patients in their homes.'

In Bridgewater, New Jersey, Roy grew up listening to the stories of his Dadu from his grandmother and mother.

Though Roy's parents took up jobs in big American companies, they remembered the examples his grandfather offered.

GlobeMed, which Roy founded a few years ago, has engaged more than 1,500 students at 46 universities and completed over 150 projects worldwide. Despite working on a shoestring budget, it has succeeded because of frugality, sacrifice and efficiency.

A Gates Cambridge Scholarship funded Roy's MPhil research on the way in which various classical social theories can be applied to an analysis of global health policy. In the fall of 2010 he resumed his medical training at Northwestern, nudged on by his Dadu's example.

Beyond the classroom, he said, he learned from and served with "valiant grassroots" leaders around the world, from indigenous Mayans in Guatemala to street children in Kolkata's slums to villagers in rural Ghana.

"I often observed that while well-meaning programmes were launched in many places with some publicity," he said, "a lot depended on one or two individuals. In many cases, after a couple of years, things died; there was little follow up action. My colleagues and specialists I worked with wanted to overcome these problems right from the start."

He deferred his medical education for two years to give full attention to GlobeMed as its full-time executive director.

Before starting at medical school, Roy pursued a master's degree in modern societies and global transformations at Cambridge.

There, he studied access to treatments for patients with drug-resistant strains of tuberculosis.

'I realised that health isn't just about medicine, but also about power,' he told a university publication.