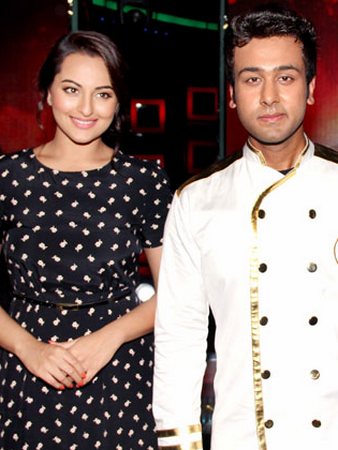 The day he left for Mumbai for his auditions, Ripu Daman Handa sought his father's blessings. "Bombay ja raha hoon, Papa, MasterChef India ke liye (I'm off to Mumbai, to participate in MasterChef India)," he said.

V K Handa, a local physician of some repute in New Delhi, shot back a sarcastic response, "Poster lagwaa doon (Should I put up a poster then)?"

Today, weeks after Handa won the latest season of MasterChef India, a congratulatory poster hangs outside his house.

In many ways, he was the most unlikely candidate on the show. For someone who confessed to spending more time in the gym than in class, dreaming about girls as most boys his age do (he is just 23) and working as a trainer in a local health club, Handa had little to do with the kitchen. Or so it seemed.

Last month, Ripu Daman Handa proved everyone, including his father, wrong when he walked home with a cheque of Rs 1 crore and the coveted title.

Handa's win is sweeter because the two other contenders in the show's final round had strong culinary backgrounds. Doyel Sarangi came armed with a degree in nutrition while Navneet Rastogi belonged to a family of caterers in the temple town of Varanasi. Rastogi even had prior MasterChef experience -- he was among the top 20 contestants last season.

Even so, on June 14, Handa stood on the sets wearing the Golden Chef Coat, grinning as he held up a large replica of the Rs 1 crore cheque for the cameras.

If you've followed the show, chances are you'd know that his first outing in the kitchen happened when he was in the eighth grade. He cooked a fairly elaborate meal for his age -- rice, dal, vegetables and rotis -- on Karwa Chauth for his fasting sister-in-law and mother, a tradition that has continued since.

"My mother told me 'Tere haath mein jaado hai (You have magic in your hands)!' and my bhabhi told anyone willing to listen about my cooking skills," Handa says quite excitedly over the phone from New Delhi where he stays.

Handa isn't very polished. He is not magnificently articulate and, unlike your stereotypical achievers, he's still figuring life out. There is something quite honest about him, which is probably what got him through the many rounds of the show and won him admirers.

"To me, cooking is like painting; masalas are like colours. Both have an element of creativity and, in both, presentation matters," he says.

His love affair with the kitchen began that Karwa Chauth day. He started getting himself acquainted with the spices and herbs in the kitchen. "I tried to learn about all the masalas, learn what they are called in English and Hindi. Today, I can say that I know of almost all of them."

Over the years, slowly and steadily, Handa taught himself to clean, chop, cook and present food. The ladies of the house helped, of course, but he also picked up a good deal by watching videos on the Internet "and reading Chef Sanjeev Sir (Kapoor)'s cookbooks".

By happy coincidence, Kapoor -- one of the earliest success stories of cookery shows on Indian television -- was also one of the judges on the show and the one who announced Handa's name as the winner at the end of the final episode.

On hearing his name, Handa's father was so overjoyed he tried to lift his young son while still on the stage. Past sins were forgiven. Ripu Daman Handa had earned a place of honour in the family. 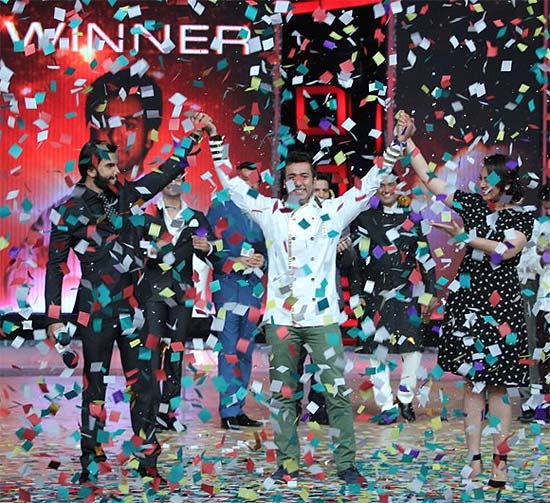 Till MasterChef India happened, Handa had lived in the shadows of his elder brother, Vishal. "He was the brilliant one. He'd score distinction; I would barely pass my exams. Whenever my parents visited school, they'd meet my brother's teachers and my mother would try to slip away, wanting to avoid meeting my teachers."

In a family of overachievers -- his father is a doctor -- Ripu Daman Handa was the odd one out. "I never enjoyed studying," he confesses. "I loved mathematics and accounts but I hated Hindi. My teachers always told me they couldn't believe I was Vishal's brother."

Even his mother underlined the difference between her two sons on more than a few occasions. "Everyone called me 'duffer'," he says.

His voice, as he recalls those days, is matter-of-fact; there is no hint of jealousy or accusation.

Handa never went to college because his Class 12 scores were terrible. "I completed my graduation (in commerce) via a Delhi University correspondence course," he says.

With little to do at home, Handa began spending more and more time before the television, He piled on the kilos till, soon, he weighed 110 kg. "That was when I realised I should do something about it," he recollects.

Thus began his love affair with the gym. "I spent most of the next 12 months working out, doing yoga and understanding nutrition. I would be at the gym every single day, morning, afternoon, evening. Then, one day, the owner offered me a job. He said 'Waise bhi tu kuch kar nahi raha hai, trainer ban ja. Thoda paisa bhi kama lega (It's not like you're doing anything, join me as a trainer. You'll make some money)'."

His family, he says, seemed to have come to terms with the fact that, unlike their brilliant elder son Vishal and his wife Sakshi, who were by now employed by reputed multinational corporations in the capital, he would probably just scrape by in life.

Handa himself had no big dreams for the future.

Then, MasterChef India invited aspiring chefs to participate in the show.

Ripu Daman Handa had no idea about the MasterChef auditions till his sister-in-law told him about it. "I asked her for the details and went for it. (At the time) I just knew who Sanjeev Kapoor was. I hadn't heard of the other two judges (Vikas Khanna and Kunal Kapoor)."

As is the case with most reality shows, the journey to the top spot was long and arduous.

Last November, at the first round of auditions in New Delhi, Handa carried a pizza made out of makki di roti, kebabs stuffed with cheese and dry fruits and fruit tamarind saute.

When he reached the venue, he was horrified by the number of people waiting in line. "I reached there in the morning and I had no clue how long it would be," he says.

On learning it would be long before his turn came, Handa decided it was no point wasting his time in desperation. "So I just slept!" he says laughing. "I remember seeing all these contestants around me. Everyone wanted to win. I (on the other hand) just wanted to be on the show so I could show everyone what I could cook. That was all."

Much of Handa's cooking experience came from his family's Sunday ritual where the men would take over the kitchen.

This, of course, isn't counting the times he would invade the kitchen whenever it was free. "Mother would drive me away occasionally," he laughs. He found great joy in feeding his family, he says. "Family and the langaar (in my gurudwara)."

Unknowingly, Handa had already set on the path that would lead him to his calling. It came as no surprise when he breezed through the first round.

"I travel a lot," he says. "And I love seafood. I love Thai, Singaporean and Italian cuisine. My travels (and my interest in trying newer cuisines) helped me broaden my horizons."

Handa, who prefers to cook alone, says he really enjoys cooking. "I like to let the flavours speak. Defeating someone was never the point of participating in the show. You don't beat someone for the sake of food, you just cook it. I genuinely didn't participate to win; I didn't think I would. I don't think anyone did, at least initially. All I did was to ask myself, how can I make this taste good?" 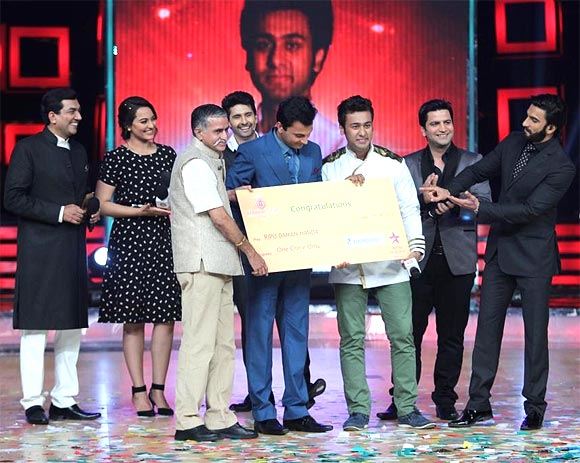 Image: At the end of the gruelling show, Ripu Daman Handa is all smiles
Photographs: Courtesy: Asia MSL Group

In the second round of the auditions, Handa was asked to cook something before the judges. "I made chicken stuffed with garam masala, cheese and onions, served with butter chicken sauce and cashew nut gravy, with mint shashlik," he says. Chef Kunal praised his butter chicken sauce.

In the final round, he was not only the youngest contestant on the show but also the oddball -- a gym instructor who loved to cook!

Somewhere along the way, he says, something clicked. His mother noticed it too.

"She told me I'd changed a lot on the show," he says. "I suppose it was true. I became more focussed on the tasks ahead of me, of what I could do with different ingredients."

Handa says a lot of people, including his father, thought he was there to waste time "Everyone thought 'Yaar yeh toh Dilli ka chokra hai, mazey maarney aaya hai (He's a Delhi boy, he's here to have fun)."

But, with each passing round, it became clear that he was also taking things seriously.

"On the show, when a challenge was thrown at us, everyone would race to start. I usually would spend the first 10 minutes thinking what all I could do with this and then get started."

Handa recollects a particular incident, "The final round was in Mumbai. Like all Delhi boys, I thought I could check out the Mumbai girls. But all I was doing was going to the studio, cooking, heading back to the hotel and crashing out, and doing it all over again the next day. Once I called up my mother and told her that I don't dream of girls anymore; I dream of vegetables. My mother laughed and said, 'Sudhar raha hai (You're changing for the better)'!"

This is what Handa believes too -- the show has made the truant child realise his goal.

"My school principal called me up," he says in a can-you-believe-this tone. "The school wanted to felicitate me!"

He said sure and went back to school!

In many ways, life has come full circle. The MasterChef win means he can begin a new chapter. He can write a book about his recipes and do whatever his heart pleases with the Rs 1 crore he's won.

Handa says he wants to study cooking formally and, like every good Indian son, he's given the cheque to his mother to let her decide what he should do.

Handa confesses he did have a girlfriend once who "is possibly considering returning to me. I don't think I'll go back though. Right now, I'd rather focus on my work," he says, adding a rhyme with some amount of flourish: "Right now, my life and my wife is my knife!"

On June 14, Ripu Daman Handa won the third season of MasterChef India, a competition that changed his life. He plans to write a cookbook soon and use the money he's won to good use. His dream is to cook for the chef who's dreaded internationally, Gordon Ramsay.