Sign in  |  Create a Rediffmail account
Rediff.com  » Getahead » '99 per cent women have faced some kind of abuse or harassment' 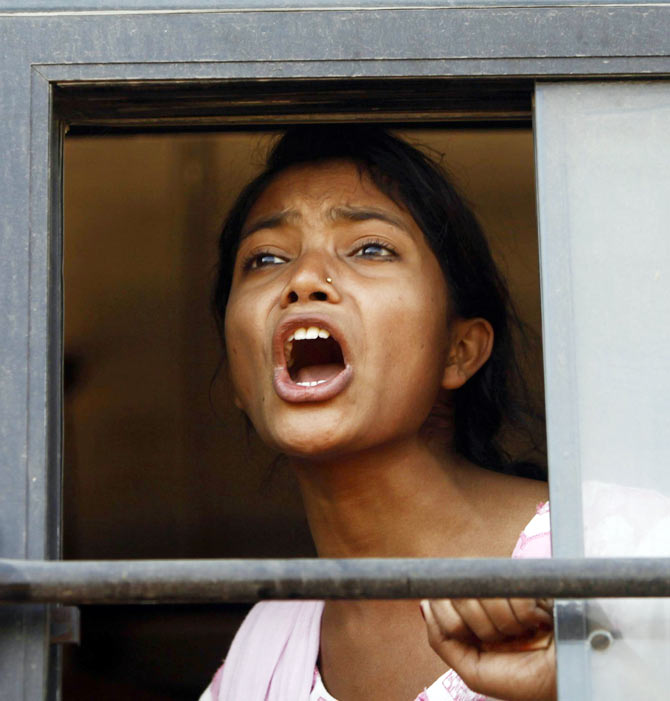 Image: A demonstrator shouts slogans from inside a bus after she was detained by police near the Rashtrapati Bhavan during a protest rally organised by various women's organisations in New Delhi December 21, 2012.
Photographs: Mansi Thapliyal/Reuters Prasanna D Zore

Shocking details of physical abuse and harassment of women in India

To tell you honestly, before SafeCity.in, I also let it pass," says Elsa D’Silva about how she would deal with physical abuse and harassment she faced from men.

"After SafeCity.in I have become emboldened to stand my ground and say it is not acceptable and I will not accept it any more," says Elsa, who along with Saloni Malhotra, Surya Velamuri and Aditya Kapoor started SafeCity.in, a crowd-sourcing platform that lets women report instances of abuses and harassment they face in their cities and towns in India.

“At every stage of the day a woman is harassed (in India),” says Elsa as she talks about the harassment a woman faces no sooner does she steps out of her home and till the time she comes back to the safety of her home.

In December 2012, Elsa and her co-founders were attending an event in Sweden attended by people from all over the world who were narrating their experiences of solving various social evils faced in their societies/ countries.

Ten days later, the Delhi's gang rape occurred. This group of four realised how important it was to do something for the safety of women in India.

Despite being busy with their corporate jobs and start up ventures, within a week of the Delhi incident, they launched SafeCity.in voluntarily as a social initiative.

They tweeted about their initiative. They wrote to a lot of women to tell them how SafeCity could help tackle the issue in some way.

Since women's safety had become an important issue post the the December 16 gang rape, the media showed interest in their initiative.

As a result SafeCity.in was successful, at the outset, in collecting considerable data about various types of abuse -- physical, verbal, visual, etc -- that women across India face.

SafeCity.in has already received 150,000 unique visitors, who visit their site to report instances of abuses, check what other people are writing about various Indian cities and offer help and advice to women in need.

Elsa believes that the data they have collected so far is too small to make any significant impact on law enforcement agencies.

Their main aim, she says, is to get women break their silence and report their experiences. And SafeCity offers them complete anonymity.

“You need to talk about your stories because if you don’t talk about it you won't be helping other women,” says Elsa about the cultural change they want to bring in the attitude of Indian women.

In an interview with Rediff.com Elsa reveals some shocking details of physical abuse and harassment of women in India.

How has SafeCity.in helped women in India since you launched December 2012?

It (sexual abuse and harassment of women) happens all over (India). We have got stories from 50 cities in India, irrespective of their socio-economic status.

If you look at official statistics about such incidents it is very low because women don’t talk about it for fear of their identities being revealed. They also fear going to the police and reporting the matter. So, we believe reporting anonymously encourages women to come out with their experience of harassment.

If you want to report an instance of abuse or harassment you have witnessed, login to www.safecity.in 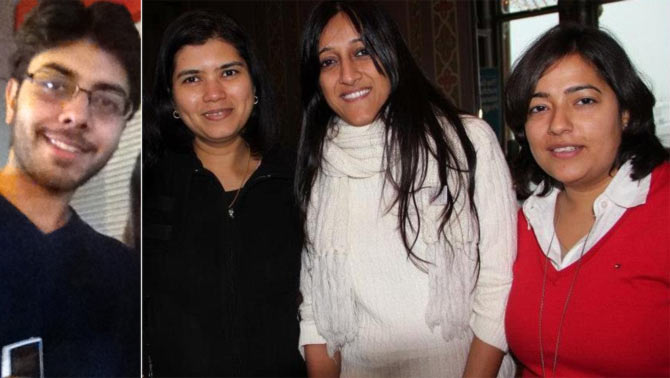 Image: A collage of the co-founders of SafeCity.in. From left: Aditya Kapoor, Elsa D'Silva, Surya Velamuri and Saloni Malhotra

Trends of abuse as revealed by the WhyPoll and SafeCity survey of 1,350 women in the National Capital Region…

Verbal abuse is one of the highest forms of abuse across India.

How does a day pan out in the life of a woman in Delhi according to your survey?

When I get home: I see a man standing without his pants outside my house.

Outside the station or a bus stop: You get comments like 'Excuse me, babe, excuse me'. You board a bus or a metro you get groped, get ogled at and get your private parts touched from the behind.

You reach your destination: I got raped by my teacher; policeman at an SBI branch harassed me.

On the journey back home: Again ogling, whistling, catcalls, groping, getting photographed by strangers, getting slapped on the back…

…And when you go home and tell your family about it: They don't think it is a serious matter anyway. Your family tells that you should come home early and take precautions. That is the end of the day.

At every stage of the day a woman is harassed in India.

Challenges you faced to put this project together…

The first is creating awareness of such a crowd-mapping tool.

The second is to get people to report.

Even my friends, who keep track of the stories, tell us that they face similar kind of harassment and they identify with the stories. Ninety-nine per cent of women have faced some kind of abuse or harassment.

'Talk about your stories. If you don't, you won't be helping other women' What else is SafeCity striving for?

One is to break the silence (of women) and talk about (their) harassment.

This year we should have at least 100,000 reports from Delhi alone. That is the kind of volume we want, to establish trends and then (show) it to the authorities. We believe till such time our sample size is too small to bring about a major change.

So our whole aim is, through this crowd-mapping tool, to provide an outlet for women to share their stories anonymously.

Is SafeCity helping cities and towns become a better place for women to live in?

This data is available free of cost. So what we are recommending individually is, like TripAdvisor, if you go to a new place, a new restaurant or a hotel, you check it out to see what people are talking about it.

Similarly, as a woman if you are going to a new place, about which you are not sure about, you have got to check out what others are saying about the safety of women in that city or area, and find out how safe that place is for you. At the end of the day, you are also responsible for your own safety.

There are women who regularly keep track of all the reports coming in. There are also people who offer help and advise on individual reports and these are people we have never met. People are connecting with people who they have never met. In that sense it is quite an interesting platform.

Your advice to women…