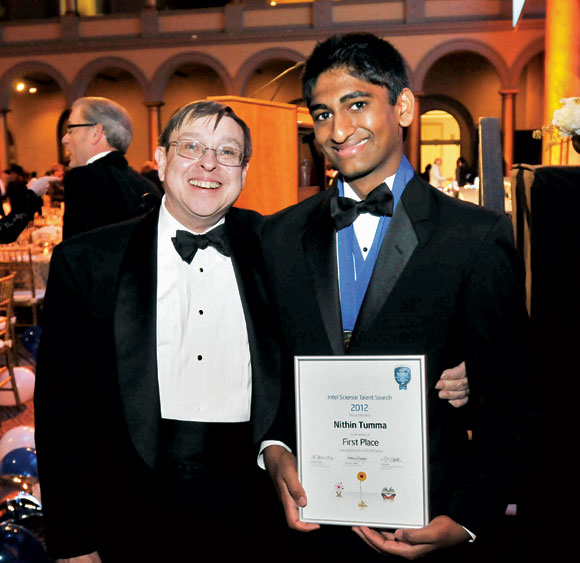 Nithin Tumma, 17, was announced the winner of the Junior Nobel prize science competition while 2 other Indian American kids found their place in the top 10.

After having no winners in the Top 10 last year despite fielding more than six finalists among the 40 finalists, Indian American kids came roaring back with a vengeance in this year's Intel Science Talent Search--dubbed the Junior Nobel Prize in Science competition--to take first place and also two other prize-winning slots in the Top 10.

Nithin Tumma, a 17-year-old from Fort Gratiot, Michigan, a small town about a hour-and-a-half drive from Detroit, won this year's competition for his research on breast cancer treatments that are more effective and less toxic.

His project was about figuring out how a protein helps cancer evolve and hide from the body's immune system.

Tumma, son of Drs Suresh and Kavita Tumma, a cardiologist and a gastroenterologist respectively, who both hail from Hyderabad, received a $100,000 award from the Intel Foundation at a black-tie gala held here on March 13.

He thus becomes only the second Indian American to win this prestigious competition since its inception in 1942.

Shivam Sud of Durham, North Carolina, was the first Indian American to win top prize in 2008.

Scientific research, achievement and leadership skills were judged upon 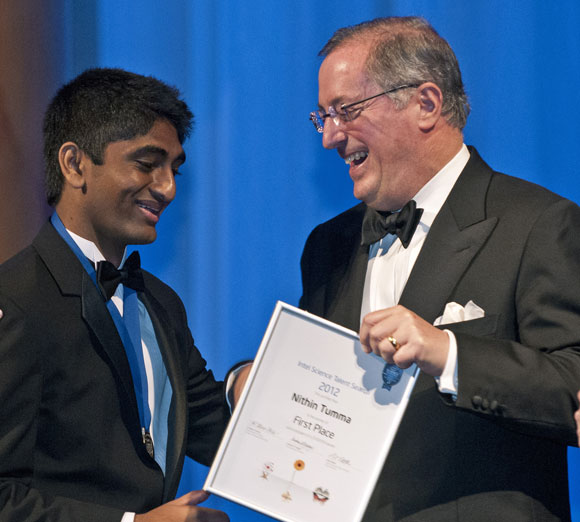 This year, there were seven Indian American students among the 40 finalists who were provided with an all-inclusive weeklong trip to Washington to exhibit their projects at the National Academy of Sciences, and along with several other Chinese American and Korean American students, constituted over 40 percent of the finalists, once again manifesting the Asian American student dominance in science, technology, engineering and math in recent years.

The high school seniors, competing for $630,000 in prize money, were judged on their scientific research as well as achievement and leadership, both inside and outside the classroom.

President Barack Obama also met with the finalists at the White House, making time for them although he was in the midst of a hectic schedule with the visit of British Prime Minister David Cameron.

Tumma, was showered with kudos by Dr Andy Yeager, the head judge and director of the blood and marrow transplant programme at the University of Arizona College of Medicine, who said that Tumma's project has "tremendous implications for the understanding of interactions among molecular pathways in cancer development and for the development of targeted potentially less toxic cancer treatments."

Using techniques to measure activated protein levels in cultured breast cell lines at varying stages of malignancy, Tumma characterised two biochemical pathways that play a role in cancer pathogensis, specifically identifying the role of a protein--gC1qR--in the evolution and immune-invasion of cancers.

First in his class of 332 at Port Huron Northern High School, Tumma is an award-winning varsity tennis player and the leading scorer on the varsity Quiz Bowl tram and co-founder and captain of the robotics team.

He is also the founder of a district-wide math circle for gifted students and a research club for middle school children.

Besides, all of these extra-curricular activities, he is also a volunteer for the Port Huron Museum, and has created an online database of historical information and initiated a programme to restore local landmarks. 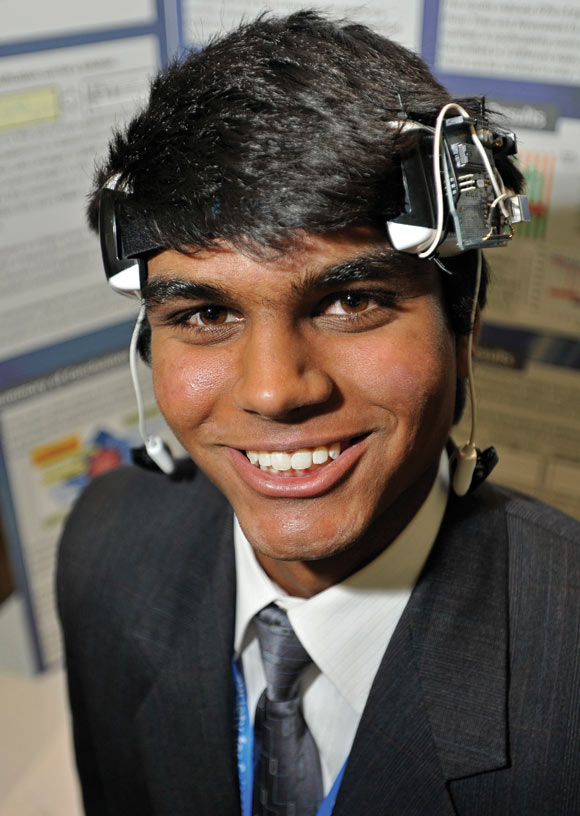 The second place prize of $75,000 went to Andrey Sushko, 17, of Richland, Washington, for his development of a miniature motor, which uses the surface tension of water to turn its shaft. Mimi Yen, 17, of Brooklyn, New York, won third place and $50,000 for her study of evolution and genetics.

Fourth place and $40,000 went to David Ding, 18, of Albany, California, who studied a branch of mathematics called Cherednik algebras. Benjamin Van Doren, 18, of White Plains, New York, won fifth place and a $30,000 award for showing that birds migrating in autumn get their bearings during the morning and tend to fly into the wind.

The sixth place award of $25,000 went to Neel Patel, 17, of Geneva, Florida, for a device that uses sounds instead of pictures to convey information.

Coming in seventh was Anirudh Prabhu, 17, of West Lafayette, Indiana, who received $25,000 for demonstrating that odd perfect numbers, which equal the sum of every number they can be cleanly divided by, have a lower limit.

Eighth through 10th places, which each come with a $20,000 award, went to: Clara Fannjiang, 17, of Davis, California,, for her work on creating images of celestial bodies that give off radio waves; Alissa Zhang, 17, of Saratoga, California, who explored three different ways to monitor blood glucose levels using light instead of needles; and Jordan Cotler, 17, of Northbrook, Illinois, who developed a new way to send encrypted messages using quantum mechanics and Einstein's theory of special relativity. 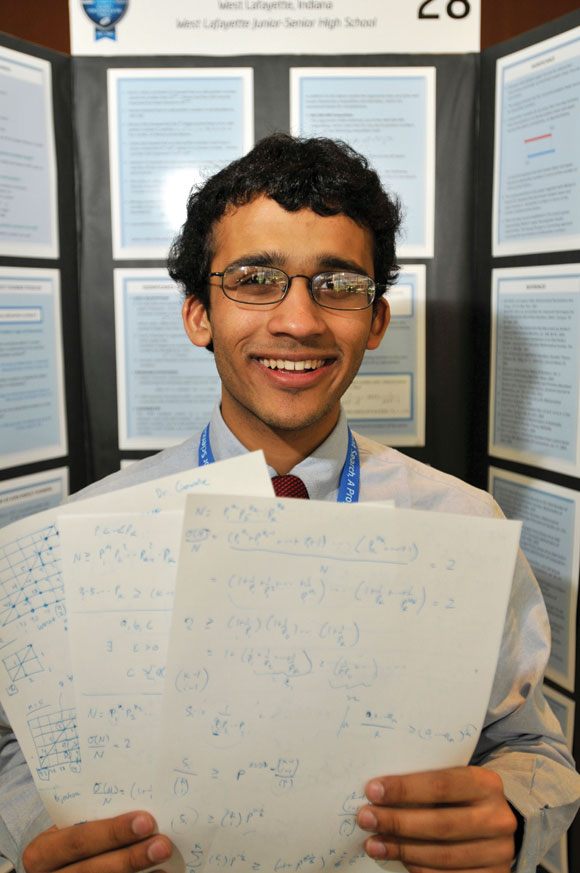 Image: Anirudh Prabhu demonstrated that odd perfect numbers, which equal the sum of every number they can be cleanly divided by, have a lower limit
Photographs: Intel Science Talent Search

All of the competitors have now joined an exclusive club of Science Talent Search alumni that includes seven Nobel laureates, four National Medal of Science winners, 11 MacArthur Foundation Fellows and Brian Greene, a string theorist and author who visited with students at a dinner on March 9.

Intel president and CEO Paul Otellini in his welcoming remarks at the gala said, "There are 40 individuals here who prove we still have the capability in this country to cultivate the next generation of innovators, thinkers, scientists and entrepreneurs," and exhorted the students, "I'm keenly looking forward to watching you make wonderful things happen in the coming years."

Otellini said, "We invest in America's future when we recognise the innovative achievements of our nation's brightest young minds," and added, "Hands-on experience with math and science, such as that required of Intel Science Talent Search finalists, encourages young people to think critically, solve problems and understand the world around them."

He said, "Rather than simply memorising facts and formulas, or repeating experiments with known outcomes, this competition engages students in an exciting way and provides a deeper level of understanding in such important but challenging subjects."

Walter Isaacson, president of the Aspen Group, and biographer and friend of Apple founder, the late Steve Jobs, encouraged the students to follow the advice of Jobs, who said, "Stay hungry, stay foolish," and that "the people who are crazy enough to change the world are the ones who do."

Elizabeth Marincola, president of Society for Science and the Public and publisher of Science News, reminded the exceptional teens of the value of bringing a scientific mindset to all their endeavours. "My hope," she said, "is that each of you will look up, reach out and always use your science as a vehicle for good in this world."

In total, the Intel Foundation awarded $1.25 million for the Intel Science Talent Search 2012. When Intel assumed the title sponsorship 14 years ago, it increased the annual awards by more than $1 million to bring greater attention to math and science achievement, encourage more youth to embrace these fields, and further show the impact these subjects have on the country's future success.

This year's finalists hail from 16 states and represent 39 schools. Of the 1,839 high school seniors who entered the Intel Science Talent Search 2012, 300 were announced as semifinalists in January. Of those, 40 were chosen as finalists and invited to Washington, DC, to compete for the top 10 awards.

Society for Science & the Public, a non-profit membership organisation dedicated to public engagement in scientific research and education, has owned and administered the Science Talent Search since its inception in 1942.