A recent McKinsey report warns that unless IT professionals re-train themselves, they could become irrelevant.
Ayan Pramanik finds out more.
Illustration: Dominic Xavier/Rediff.com 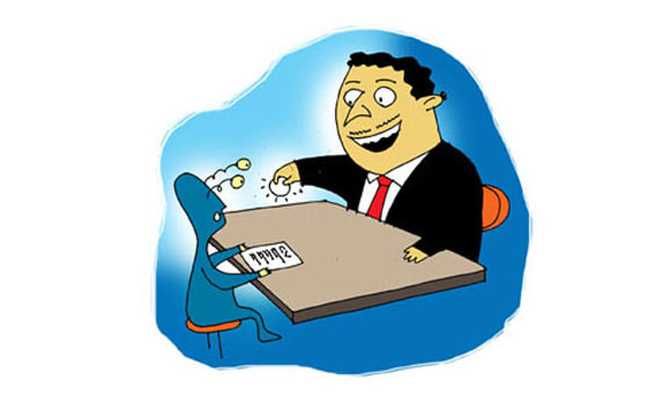 Small information technology services firms facing a shortage of talent for both entry-level and middle management jobs are finding a lack of new technology skills among applicants from large IT services firms.

At least three companies have experienced this while interviewing for positions at middle levels.

Thousands of employees at IT services companies with 7 to 15 years of experience stare at job losses if they fail to up-skill themselves in digital technologies.

Bengaluru-based Kreatio Software looked at 200-odd resumes for positions such as quality analysts, project managers and functional analysts with 5 to 10 years of experience and found many of these people had stopped coding because they were busy attending meetings and managing team members.

"We are a very small but profitable company. We are doubling our manpower. This includes building middle management and leadership capabilities. We do not have enough people, yet our experience during recruitment was such," said Krishna Kumar, chief executive officer, Kreatio Software.

Many small IT companies echoed similar sentiments on social media, he added.

"Besides, there are people I know who have privately expressed similar views," Kumar said.

Deltaphi, a Mumbai software testing services firm, had a similar experience during recruitment of testing hands.

The majority of the over 2,000 members of Nasscom are small and medium IT services firms.

Industry analysts said there had been a surge in the number of resumes of IT professionals with 7 to 15 years of experience as many large firms were trimming their workforce that had for long been managing large and long-term projects.

With a significant technology disruption and automation, projects for these services players are becoming smaller, reducing the need for people managers.

A recent report by McKinsey India said, 'The bigger challenge will be to retrain 50 to 60 per cent of the workforce as there will be a significant shift in technologies.'

Unless IT professionals re-trained themselves, it added, they could become irrelevant.

Kris Lakshmikanth, chairman and managing director, The Head Hunters India, estimated if jobs of 10,000 people were automated in any of the large IT firms, at least 300 people would have been in managerial roles who were in need of re-skilling to be deployed on projects in digital technology.

"On the one hand many mid-level professionals have suddenly become available in the market and on the other they are not the right fit for small software firms," said Lakshmikanth.

"Generally," Lakshmikanth added, "these people are familiar with working in 500 to 1,000 people teams and hence it is difficult for them to cope in smaller companies."

Kumar of Kreatio said the bloated middle management in large firms was playing the roles of coordinators rather than value creators.

Some firms have exposed employees across all levels to technology to help them stay relevant.

"I can take anyone from my operations team and tell that person to work with the client. It gives people exposure on how the business is run," said Sudhir Tiwari, managing director, ThoughtWorks, a technology consultancy firm.