There's something quite serene about an endless stretch of barren land discovers Abhishek Mande Bhot/Rediff.com 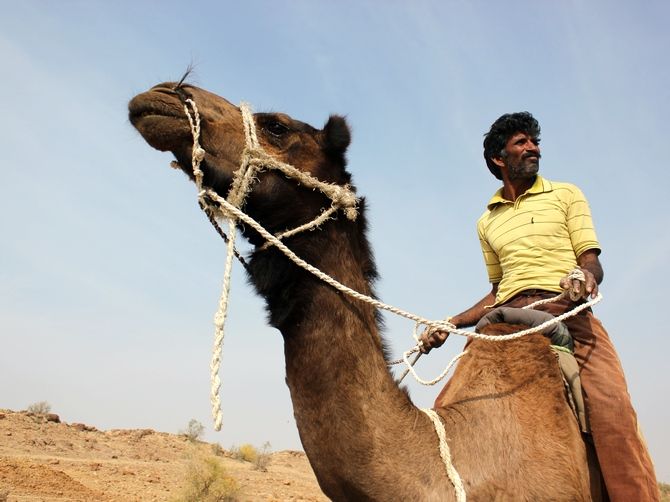 The landscape is arid.

A solitary car leaving a trail of dust is about the only sign of human life in my line of vision.

Despite the sun beating down on the lifeless panorama, it isn't half as hot as I'd imagined. Summer is still a few months away and the cold desert breeze, that tends to get bitter in the nights, is a welcome solace.

The car has long since driven past and the landscape returns to its lifeless self.

I had often read of moments like these, moments of absolute peace, moments that we so often seek but rarely ever find.

Somewhere in the Thar Desert, along the old Silk Route, with the winter sun kissing the nape of my neck, I suspect I may have experienced one such moment.

"No one comes here," Nakul Hada says interrupting my thoughts.

Hada is the general manager of Suryagarh, a beautiful hotel located on the outskirts of Jaisalmer that has organised this trip.

We are being driven along Silk Route with Hada narrating stories of times gone by.

It isn't very difficult to picture colourful caravans ambling along the dusty roads, even less difficult to imagine what this scene must have been like at a time when the punishing cacophony didn't follow us everywhere.

Once an important stop along the Silk Route, Khaba is now an abandoned village; its deserted fort, a reminder of what it must have been at the peak of its prosperity.

Situated atop a hill, the fort (pictured below) offers a 360-degree view of the ruins that surround it. The ruins were once a prosperous village.

Between the 16th and the 18th centuries, Jaisalmer was a well-established location on the Silk Route; the Khaba Fort, a notable landmark. The village it overlooked belonged to the Paliwal Brahmins.

The fort, which dates back to the 1300s, precedes the arrival of the Paliwal community that received it as dowry from the local landlord.

Nakul, who is our guide for the day, tells us that the Paliwals prospered despite the barrenness that surrounded them because its members worked for the larger benefit of their community rather than for their selfish needs.

Even though they lived in harsh conditions, they managed to find a way to turn it to their advantage. They developed unique irrigation techniques that held them in good stead during the dry months.

The township, he says, comprised some 5,000 houses, six artificial lakes, 80 courts and some 125 temples.

Caravanserais dotted the landscape and Govardhans or water markers (below), directed travellers to sources of water in the desert. 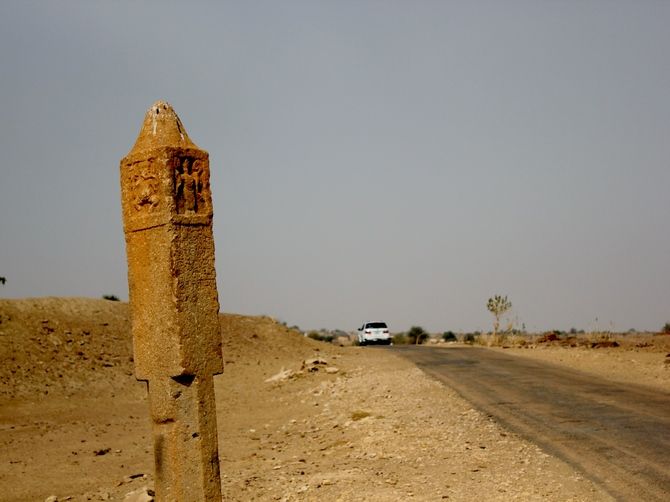 Today, the poorly restored fort has almost nothing to offer and is a ruin at best. But the tales that tumble out through Nakul make it more and more fascinating.

Had I been travelling alone, chances are I'd have given it a pass but the good folks at Suryagarh, in a masterstroke of sorts, have made this almost-forgotten monument the centrepiece of their itinerary.

Nakul tells us we would return to the fort once more at daybreak to witness something magical. And I have no trouble believing him.

There is something about Rajasthan that endears it to tourists from around the world.

Perhaps it fits in well with the Western perception of India -- of smiling people in colourful clothes riding elephants and charming snakes out of baskets. 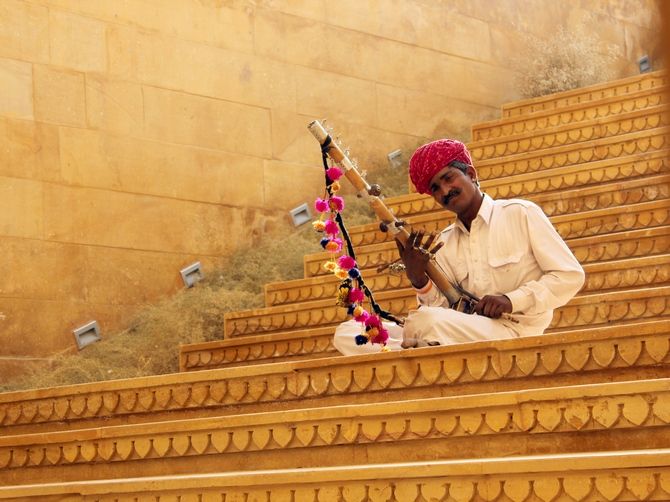 It has the forts; it has the hospitality; it has the grandeur. In the winter months, it even as the perfect weather!

But beyond all of these things are the stories. Of princes and evil landlords, legends of chivalry and valour.

In Rajasthan, the line between myth and reality, if it exists at all, is thin. And it is that that probably makes the land so enduring.

Legend has it, says our guide, that Kuldhara was a haven to weary travellers en route to Jaisalmer and one of the wealthiest villages in the area.

The girl belonged to a Paliwal Brahmin family of Kuldhara.

Knowing fully well that the agrarian community could never stand the might of the prime minister, all the villagers decided to uproot themselves. Overnight.

For good measure they even cursed that the village would never be occupied again. And that was the end of that.

Even so, the land is dotted with relics that remind us that the Paliwals were once there.

Relics like these cenotaphs that stand in memory of the Paliwals who passed on. 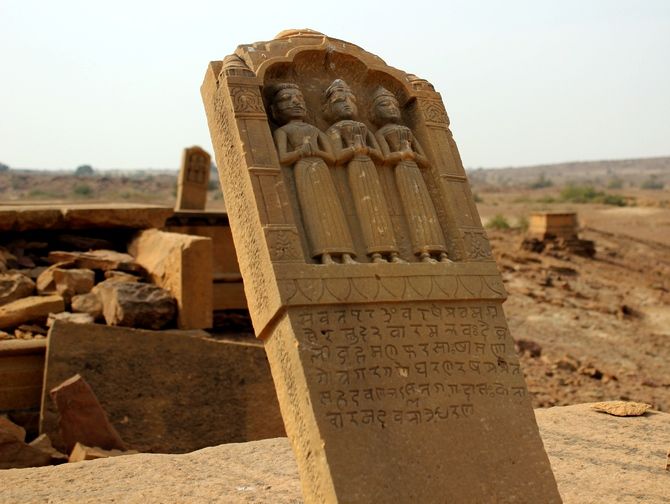 One of the ideas of taking us on this somewhat unusual trail, we are told, is to make people aware of these little-known spots that lie unprotected and are often plundered by souvenir-hunters or local traders.

"Every time we come here, we discover something has gone missing. Someone takes it away and the next thing we know is it's either disappeared altogether or has found its way to the Jaisalmer market," Nakul says.

Nakul's boss Manvendra Singh, the managing director of Suryagarh, points out that if it were the West, "they'd have made a big deal out of it and protected it".

"There's so much history scattered here and no one seems to care," he says with some agitation. "There's no one to stop me from taking a cenotaph or three and placing them in my hotel if I wanted! That is a problem!"

Suryagarh (photographed below) is a stunning property that stands, literally, at the edge of the Thar Desert. It draws inspiration from all things local -- be it the architecture or the hospitality. 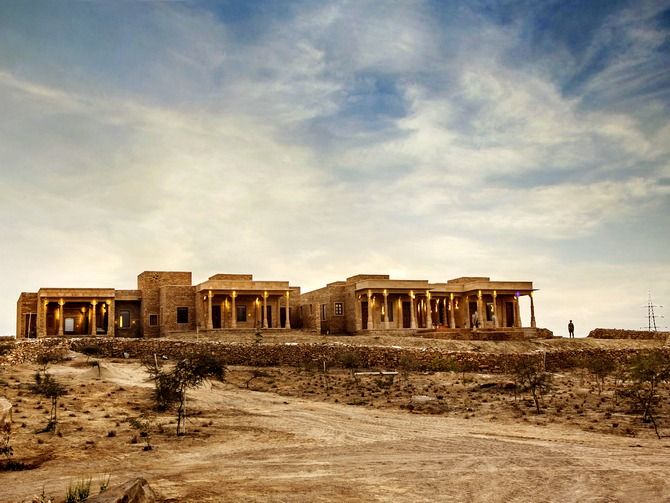 And being the recipient of Suryagarh's hospitality can be quite quite an experience. One meal after another, we relished every single local delicacy there was to offer.

The hotel has three chefs: one in charge of the Indian menu, one for the Continental fare and third, a local halwai, who was given the charge of all things sinfully sweet. The 'Halwai Chef' as he is called, had an unfair advantage though. Two delectable samples of his daily speciality would make their way into our rooms mysteriously while we were away.

After a while though it was, admittedly, overwhelming; there is really only that much you can have of anything, especially the good stuff.

So when Nakul told me that the magical daybreak trip he had promised me would include breakfast, I may have made a face.

"Don't come for the breakfast," he said with a smile, "Join us anyway. You'll see peacocks!"

As the SUVs made their way to the Khaba Fort in pitch darkness the next morning, I sat morosely, wishing I was in bed under a comforter and hoping for the sake of Nakul's good that the bloody peacocks were worth this trip.

In biting cold, we made our way to the top of the fort where a breakfast table was set up. Like a petulant child I sighed and settled behind my plate and waited, still not completely awake.

It would be another half hour or was it more? I can never tell.

The stars began to disappear; the sky began to light up, slowly at first and then rapidly, swallowing one star after another and revealing, as Nakul had promised, a magical sight.

As if from nowhere, something emerged from amidst the ruins; then another one and yet another one.

And before long, a large muster of peacocks had almost surrounded the fort, so much so the gates had to be shut to protect the temporary kitchen that had been set up for us!

The sun was out; the fog had lifted and the ruins, it seemed, were coming to life.

I stood watching them, half expecting someone to step out -- a man adjusting his colourful turban setting out for work, a woman pulling the pallu over her head, going about her morning chores.

In another era, I imagined, at a distance there would have been a caravan that had stopped for the night, just waking up and preparing for another long day's journey.

But, for now, the abandoned houses remained abandoned. A herder disappeared into the distance.

And the ruins returned to their deserted selves waiting to be explored, perhaps by a keen tourist or a lost traveller. 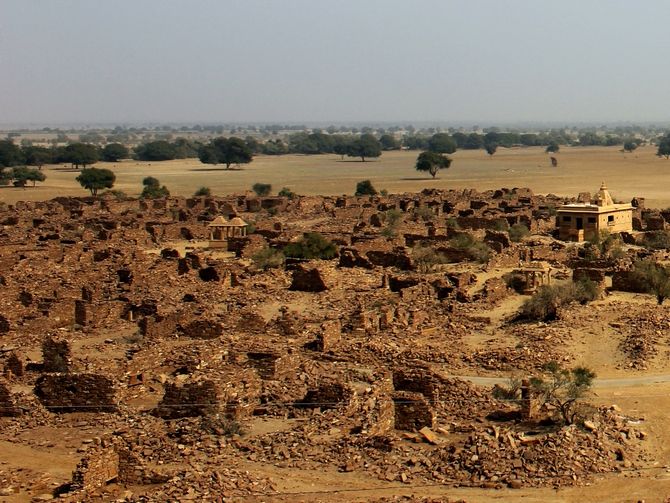 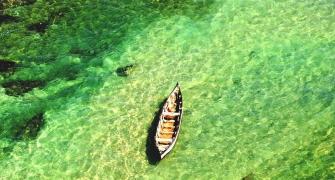 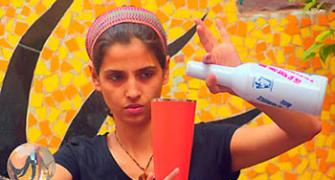 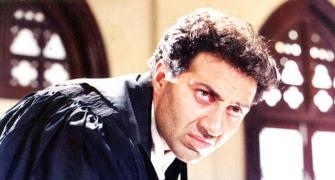 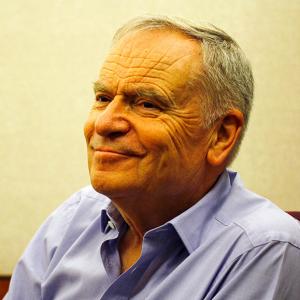 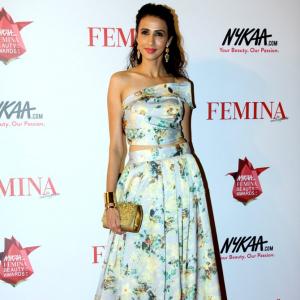