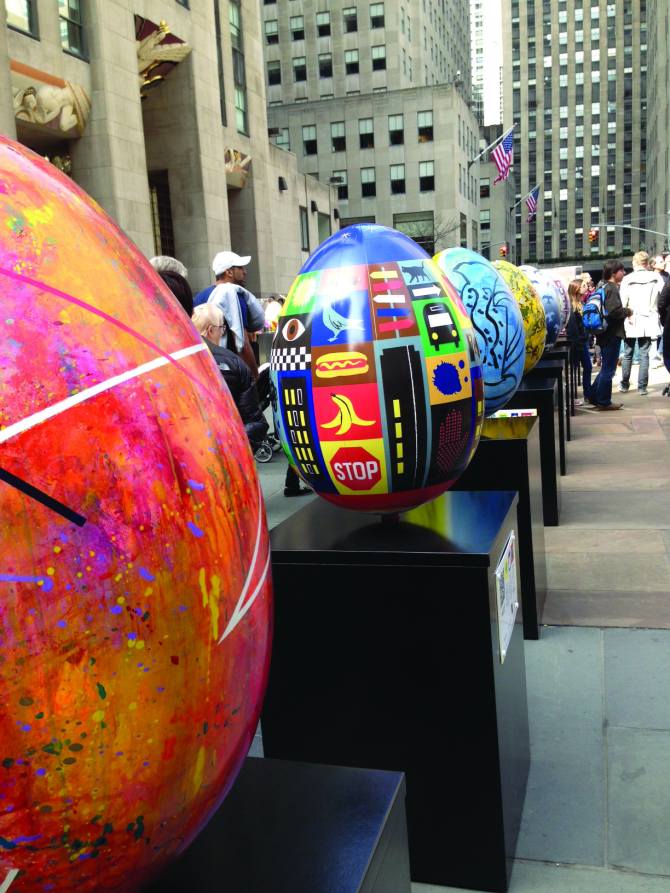 260 two-and-a-half-foot-tall eggs, designed by varied artists, made up the New York debut of the Faberge Big Egg Hunt. Chaya Babu tracks them across the five boroughs and rediscovers her city

Unless I have an assignment in Midtown or somewhere in Queens, or I visit my sister on the Upper East Side, my New York life has its habitual route from Prospect Heights, Brooklyn, to various parts of lower Manhattan and back. I take the 2/3 train or the 4/5 and that’s about it.

So even though the complex public transportation system lets me glimpse the diversity of my city’s people, I rarely experience its wide array of aesthetic pleasures -- everything from various points overlooking the Hudson or East Rivers to Central Park, old cobblestone streets downtown, the tulips on Park Avenue, industrial urbanscapes, and the many different types of public art projects that come to New York because, well, it’s New York.

Even though art inserts itself into my daily existence in the most mundane of ways -- I give a dollar to the violinist on the subway platform and Instagram graffiti masterpieces regularly -- the Faberge Big Egg Hunt, coming for the first time to New York after taking place in London, was a great way to remember corners of the city I’d forgotten about and even hit up spots I’ve never had a reason to visit.

The 18-day event was your traditional Easter pastime, but on steroids: 260 two-and-a-half-foot-tall eggs, each with unique design and decorative elements by painters, sculptors, fashion icons, architects, photographers, and more, scattered throughout the city in public places.

Some were outdoors in prominent spaces with heavy foot traffic; others were tucked into shops, indoor markets, and window displays. They were spread throughout the five boroughs, with hiding spots, including Dumbo and the Brooklyn Public Library in Brooklyn, Queens Plaza and P.S.1 in Queens, Snug Harbour in Staten Island, Grand Central Station and Times Square in Manhattan, and the New York Botanical Garden in the Bronx.

All were a sight to be seen and were surrounded by egg hunters and unassuming tourists alike, scanning barcodes to digitally ‘collect’ the eggs and snapping photos.

My initial effort to start my hunt was a failure. To cheat as little as possible, I did so little firsthand research that I didn’t even know I was supposed to be equipped with a map!

Of course, it only took Day 1 of hunting to realise I was a sucker running around hoping giant eggs would miraculously appear.

As I got a shot of my first egg in Chelsea Market, I saw another guy getting up close and personal with his cell phone to the sign. I asked what he was doing and a few minutes later downloaded ‘The Big Egg Hunt’ iPhone app.

The thing ate battery life and crashed like nothing else on my phone so I did it mostly on my own and my basket truly does not reflect the number of eggs I actually saw. Just saying.

Artist Franck de las Mercedes’s work of art, #egg121, was that first find. Its multicoloured collage-style ‘Post No Bills’ construction-site-themed egg has a back story behind it in a way that some of the others do not.

Born in Nicaragua and raised since 12 in New York’s Washington Heights neighbourhood, de las Mercedes recently lost his entire collection of unsold work in a fire that engulfed the building in which he lived and worked. He, his wife, and his neighbours were lucky to be alive, but his art was the casualty.

Everything except one piece was gone -- his Faberge Egg. It’s bright with saturated blues, yellows, and pinks, with a haunting white face taking up one curved side. De las Mercedes had completed it and sent it out days before the tragedy.

Not all of the eggs have this kind of noteworthy baggage, but they represent their craftsmen equally and contributed to the fun and beauty of seeing New York this spring.

Plus, the eggs have origins from around the world, with makers born in China, Venezuela, France, Yugoslavia, the UK, Brazil, and more. 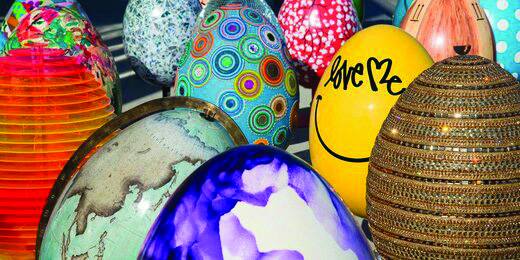 Indian artists had their presence with Naeem Khan and Waris Ahluwalia among the big names on the Faberge roster.

Khan’s egg, aptly named Khan Egg, was #189 and was ‘hidden’ at 1 Central Park West, a majestic Upper West Side corner bordering the lush park and just off of Columbus Circle.

The designer’s style shone, literally, through his egg.

It’s a golden and amber jewel-encrusted gem, with crystals of different sizes and shapes covering the entirety in horizontal lines. I would wear this as a dress in a heartbeat. Ahluwalia’s Study for Devotion 1, coincidentally one up at #190, but located much further downtown in SoHo, looks like an elegant winged bird or dark angel of sorts.

Its interlacing layers of feathers, though carved from wood, have a soft, poetic quality.

The piece lines up with the designer’s sophisticated aesthetic and is one of the examples of sculpture and moulding different shapes or materials into the larger silhouette of an egg. 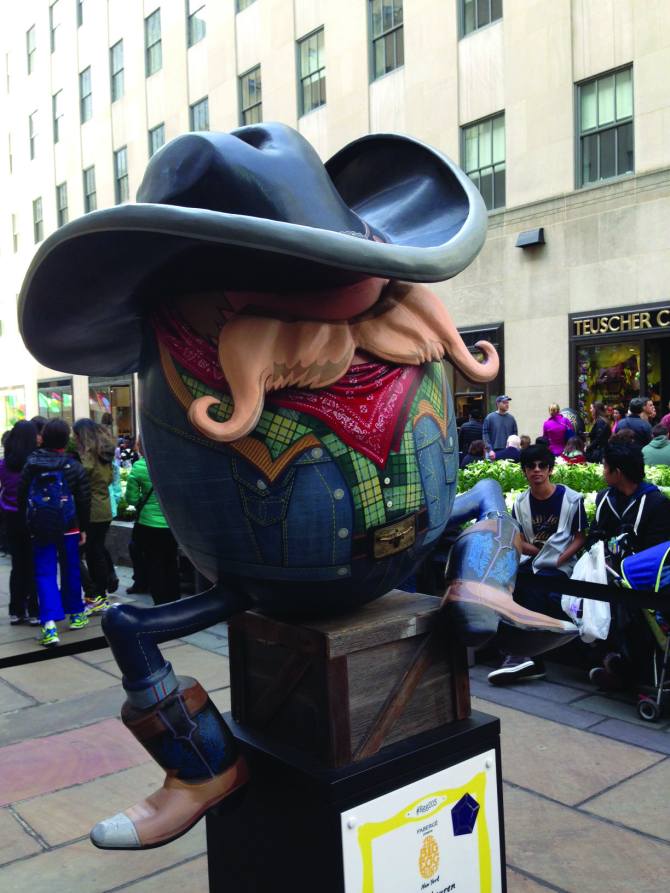 As a fashion lover, the work of apparel designers’ were among my favourites purely based on my familiarity with their creators, Carolina Herrera, Marchesa, and Ralph Lauren, Diane von Furstenburg, and others. But there was such incredible variety, and I haven’t even seen them all. 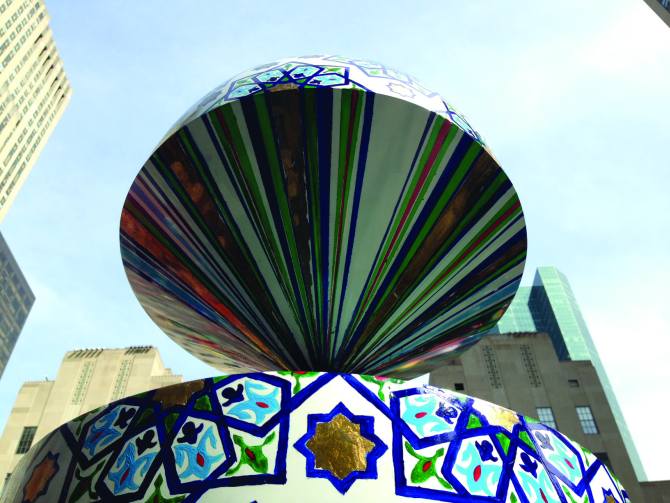 Sarah Flint’s Origami Egg #108 was constructed with squares of fine leather in pinks and oranges folded into an intricate pattern that gives the illusion of an egg about to bloom.

3DEYE’s Liberty, at 1 New York Plaza in the Financial District, is an iteration of The Statue of Liberty and a symbol of the city itself, with its gold spiked headpiece atop a ‘face’ of green streaked paint.

Echo Design’s Taking Flight has a cluster of magnificent metal butterflies trying to burst free from the egg.

Faig Ahmed’s Glitch in Reality combined ornate painted kaleidoscope images with a structural complication, his final product appearing as if the egg was being pulled in half. 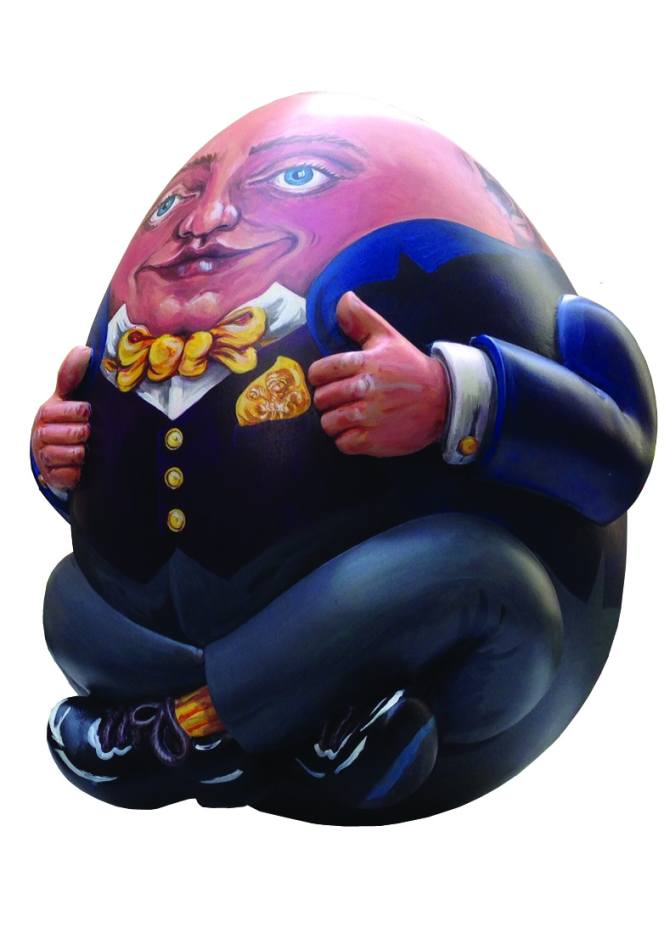 There are iconic eggs, like Martin Handford’s egg-shaped Waldo of the Where’s Waldo books -- this one was moved every day to a new location.

There’s The Royal Egg, which is Humpty Dumpty sitting on a wall, looking exactly how Humpty Dumpty looks and designed by the students at The Prince’s Drawing School. 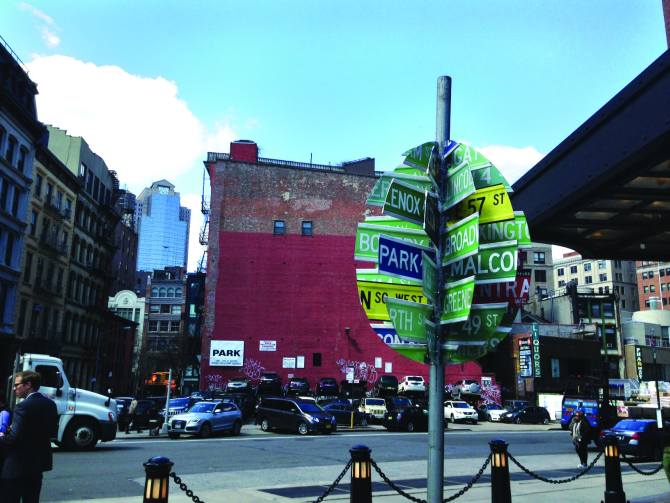 The most exciting part about hunting for these massive eggs around New York was not merely getting to see works by celebrated artists, but getting to live New York in a way that I typically don’t: With my eyes open, simply enjoying the city.

The sun came out recently and trees turned white with blossoming flowers, so as I hunted I took my first ride on Jane’s Carousel in DUMBO. I stood on that crazy line at Shake Shack in the middle of Madison Square Park.

I walked the Highline just for the hell of it. And I had an afternoon cocktail in the sexy library-esque lobby of the Ace Hotel. I had amusing conversations on the street with strangers who spoke myriad languages.

The Faberge Big Egg Hunt used art and a holiday I don’t celebrate to remind me to look up from my iPhone from time to time, no matter how many cool apps I have to keep me entertained.