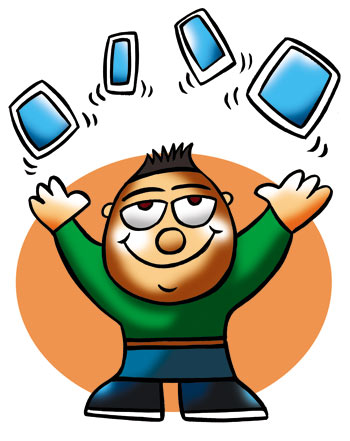 Although India has woken up to the trend quite late, there has been a steady rise in applicants registering for online courses, share experts. Illustration by Uttam Ghosh

The word 'MOOCS' sounds like a cute and cuddly cousin to George Lucas's teddy-bear-like Ewoks in a new Star Wars film.

They're far from cuddly, though, threatening much of the higher education universe with extinction -- with a lot of help from Indians.

Even as you read this, someone in the country is sitting in front of a computer, attending a class in public health offered by the Harvard University.

She has just finished taking an in-class, video pop-quiz, responded to a question on the class bulletin board from one of the 50,000 students from around the world, and is getting ready to watch the next part of the video lecture being conducted by her world-renowned, Boston-based epidemiology professor.

In two weeks, she will have finished her eight-week class, written three papers and gained a certificate, if not college credit.

This is the promise offered by MOOCS, or Massive Open Online Courses, the latest of the various 'disruptive' forces that have over the past decade swept the world, shaken up markets and transformed the way we live.

"I think online learning is the single biggest innovation in education in hundreds of years," says Anant Agarwal, president of edX, a not-for-profit Harvard-MIT joint venture that received $60 million in funding to put much of the college's educational material online. "It's the biggest one since the printing press."

These are quite different from your familiar online, instructional videos. Almost all of the MOOCS pioneers have Artificial Intelligence backgrounds, so it's no surprise that some heavy-duty technology is being utilised to make the online experience fully immersive and socially interactive, allowing for features like peer-graded papers.

India, with its enormous appetite for -- but paltry supply of -- quality education, sits squarely in the middle of this upheaval.

For instance, for-profit Coursera, the leading player in this market which has signed up close to two million unique users in less than six months and has 206 online courses, says Indians comprise 4.83 per cent of its active student base and are its second-largest cohort, next only to the US and ahead of Britain, Canada and Brazil.

It offers courses from 33 of the world's best colleges -- Stanford, Princeton, and the Berklee College of Music included. Here, students have access to the same curriculum, even professors, as on-campus students would at these respective colleges. It's also completely free.

Anant Agarwal's edX is the other pioneer in this field but, unlike Coursera, it is a not-for-profit entity with 10 classes currently offered on its website.

However, much like Coursera, it has begun attracting Indians in waves. Overall, India is the second-ranking location for seven of the eight courses that edX offers (US holds the first rank in these seven).

It is also the number-one location for an online course that is the bedrock of any MIT education in its campus avatar -- Circuits and Electronics -- with 30 per cent of its online students based in India (The US was second with 22 per cent).

Techies are not the only ones flocking to the site. Seventeen per cent of students enrolled in edX's Harvard course, 'Health in Numbers: Quantitative Methods in Clinical & Public Health Research' are from India.

"Indian universities have not yet woken up to this phenomenon," says Jayadev Gopalakrishnan, an education entrepreneur who was formerly president (retail education) at Pearson. "That's dangerous. If you had a choice between learning from an Ivy league college and a local one, which would you choose," he asks.