'There is a point near the hill where you kill the engine and park your vehicle in neutral.'
'The vehicle automatically slides a few inches, which the locals believe is due to the magnetic power of the hill.'
Rediff.com's Divya Nair travels to the land of gompas and lamas. The drive wasn't leisurely, but the roads were definitely better in most places.

We stopped for tea where we met up with Adventure 14 and 18. A teary eyed Roma shared their ordeal from the last 24 hours.

The landslide had worsened things.

At one point, Aiman and Diptiman's oxygen had dipped to 38 and 40 respectively. Roma said they were relieved that the Indian Army stepped into help.

At the army camp, she said Parth, Sandeep (from the XSO team) and the army staff took special care of Diptiman and Aiman.

Although the two weren't in the best shape, we hoped they'd get better as we reached Leh. Now that the convoy was bunched up, we all felt better.

The chatting and teasing continued over the radio.

At lunch hour, we were caught in landslide traffic that set us back by two hours.

There was a loud sound; further ahead, boulders were being blasted.

Even the small cars, we noticed, were stuffed with at least six to eight people, who peered at our 20 plus car convoy in disbelief when we overtook them.

It was past 4 pm when we arrived at Leh market. Most of us were running on reserve fuel. By the time we refuelled and reached our hotel, it was 7 pm.

It was such a relief to drive on normal roads. And we were equally glad to see more people on the road.

After checking in, Arpita, Rohan, Parul, Viraj and I stepped out to check the nearest market.

There were plenty of shops selling t-shirts with messages like: 'I just got Leh'd'; 'My sister/brother/husband/wife went to Ladakh and all I got was this t-shirt'.

We were told we could place orders for customised messages and get it within 24 hours. There were Tibetan player flags and bells on sale too. IMAGE: The wooden architecture and colourful murals of the Thiksey monastery.

Since most of our vehicles would be serviced in Leh, the participants had made advance arrangements for motorbikes to go sightseeing.

The Himalayan was a top favourite, but only two were available (at a rent of Rs 2,500 per day).

At Pangong, Shomakji and Pranabda animatedly discussed whether to visit the Nubra Valley or not.

Shomakji wanted to see the doubled humped camels while Pranabda asked what was the big deal about the extra hump.

The convoy was largely with Pranabda, except for the altitude part. Me? I was mostly on Shomakji's side.

I had seen double coconut trees in Sri Lanka and it had amazed me. I am always in favour of unique experiences.

Jatin and I had almost made plans to travel to Nubra and catch the sunset, but Ikson warned us about being adventurous at higher altitudes.

No one from the convoy was in favour of travelling to Nubra or Khardungla. The only adventure everyone agreed on was river rafting. 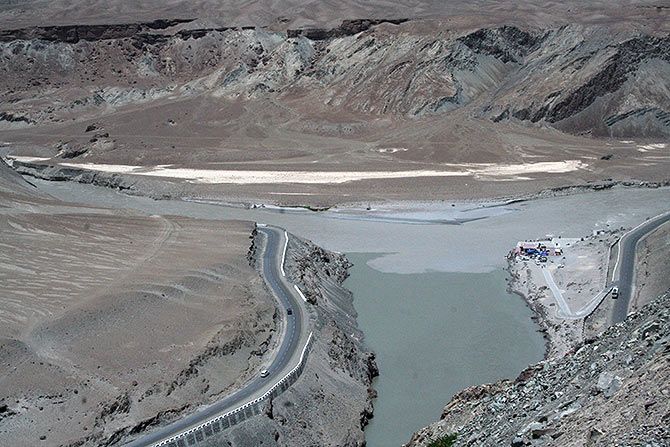 IMAGE: Sangam -- where the Zanskar river meets the Indus river.

After breakfast, we hit the road. Our first stop was the Sangam, where the Indus meets the Zanskar.

We got off and wet our feet in the water. Brrr... it was cold. The Zanskar gets frozen in winter.

We made enquiries about river rafting and four of us (Jijo, Gitu, Ikson and I) signed up for the 14 kilometre route the next morning. Enroute, we stopped at Magnetic Hill.

There is a marked point near the hill where you kill the engine and park your vehicle in neutral.

The vehicle automatically slides a few inches, which the locals believe is due to the magnetic power of the hill.

Scientists say it's an optical illusion -- the road that appears uphill for some, in reality, descends towards the Srinagar end. 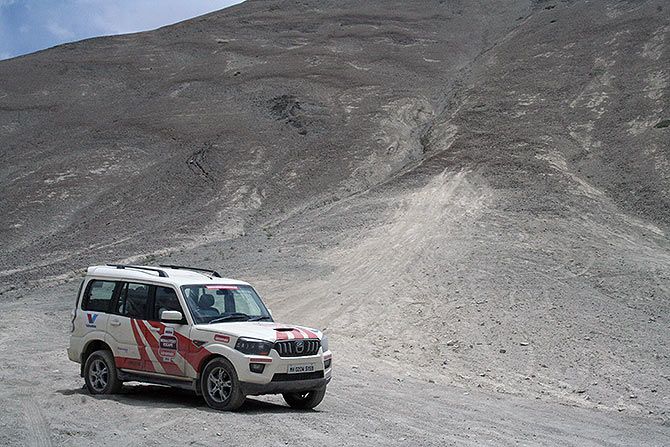 The day was just perfect, so I mustered courage and volunteered to take the driver's seat.

Ikson played guide while Jijo and Gitu sat behind (without seatbelts) cheering me.

After a rickety start -- the clutch and accelerator had to work in tandem -- I gradually picked up and steered the vehicle following every direction I was suggested. IMAGE: The intricate woodwork inside the Thiksey monastery in Leh.

We had langar at the Gurdwara Pathar Sahib before halting at the War Museum.

The museum should ideally be everyone's first stop in Leh because it gives you an idea about the history, people and culture of Ladakh.

There are photographs and collections of different kitchen equipment which are decades old. There are memories from the India-Pakistan war and information about the soldiers who lost their lives.

There is also a souvenir shop selling caps, t-shirts, material and other memorabilia and in the process, aiming to empower the less privileged.

Next, we drove up to the Thiksey monastery -- my first trip to a monastery.

Thiksey houses a 49 feet high Maitreya (the future form of Buddha) in a meditative state. The view from the chest and below is not entirely visible from the top floor and there is no access to the ground floor.

Inside the monastery, you are expected to be silent and not take pictures with the Buddha. One visitor clicked a selfie and a monk immediately asked her to delete the image. 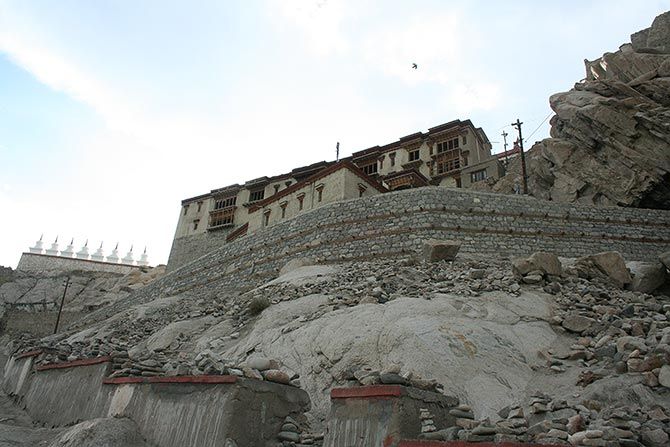 IMAGE: The Shey Palace is crumbling in many places.

We arrived at the Shey Palace on our way back.

The colourful murals and woodwork are worth seeing, but the palace is in bad shape and demands maintenance -- the murals are fading away and the structure too is beginning to crumble. 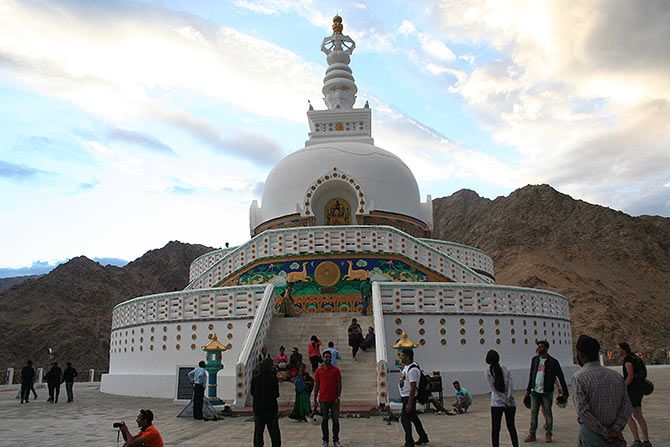 Roma and Diptiman, on a Royal Enfield, were planning to visit the Shanti Stupa (11,800 feet). It was good to see Diptiman back in action.

We cruised through narrow inroads all the way up to the Shanti Stupa. The dome, we noticed, had developed cracks and there was boards outside appealing to visitors to contribute for the repair work.

The view from the top of the Stupa is stunning. After 7 pm, the Stupa is brightly lit and visitors come to watch the illuminating sight.

We bought in Aiman's birthday by cutting a cake before dinner. Soumi, Sandeep, Shallu and Aiman would fly back from Leh the next day.

The next day of the trip, I am sure, everyone would wish to rewrite or believe never happened at all. 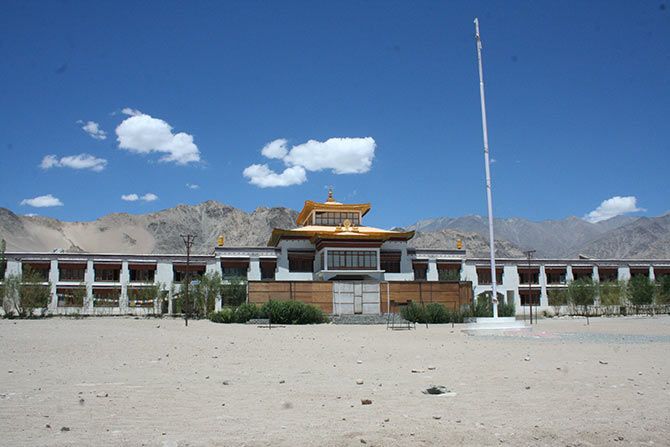 The participants who had signed up for river rafting were getting ready the next morning.

Badri and Pranabda tried to convince me to join them on the 28 kilometre stretch. I told them I was going river rafting with the media team.

Pranabda challenged me that their group of 'buddhas' (oldies) would have more fun than 'tum jawaan log.'

I was wrong. In fact, both of us would be proven wrong. IMAGE: The monks practice a dance routine ahead of the Hemis Festival.

Jijo was least interested in river rafting; he said he'd done it in Rishikesh and did not feel like doing it in the sun.

Gitu shared his experience from a trip to Goa and told us how he'd fallen off the raft; almost drowned, and how no one had come to rescue him for some time.

Ikson suggested we go after 4 pm.

With so much time to kill, we started a long drive to the Hemis monastery.

At one of the oldest monastries in Ladakh, lamas recited hymns and practised a dance rhythm, preparing for the annual Hemis festival. IMAGE: The spot where a scene in 3 Idiots was filmed is aptly titled 'The Idiotic Wall.'

As we arrived at the Druk Padma Karpo School -- the 'Rancho School -- a young girl asked us to hurry towards the school before it shut for the day.

A Ladakhi girl, dressed in denims and a tee, after she ensured that all the visitors were paying attention, announced: "This is the school where a scene in 3 Idiots was shot."

Curious visitors promptly posed next to the made-famous-by-Raju-Hirani-wall for the inevitable selfie. IMAGE: The recreational area at the Rancho School in Leh.

Back at the hotel, Ikson's phone beeped. One of the convoy members had suffered an accident at the river rafting site and was being rushed to the army hospital. I heard the name, and hoped I was wrong.

The hotel manager spoke animatedly to his staff and told them that one of the guests was no more and that a police enquiry might follow.

Vinod, who had rushed to the hospital, confirmed that Pranabda had passed away.

Dr Sangeeta and Parul were scared about rafting, but Pranabda had convinced them to try the experience.

He even clicked a selfie before they set out on different rafts. The incident apparently occurred around 1 pm when the raft carrying Pranabda and seven others capsized.

Within seconds, Ushaji was rescued and Pranabda swam onto the raft.

As soon as he got on board the raft, he threw up and within seconds, his pulse dropped. He had suffered a stroke.

After the post mortem, arrangements were made to fly the body back to Mumbai.

The expedition was called off and participants were asked if they wanted to help drive the vehicles up to Srinagar.

It was a tough time to decide, but everyone agreed to drive up to Srinagar.

That night, I was alone in my room and could barely sleep.

I had met him just 10 days ago, but his cheerful face and last words 'tum jawaan log' rang in my ears.

And behind those dimmed lights in our hotel rooms, I am sure everyone else would have similar experiences that night. 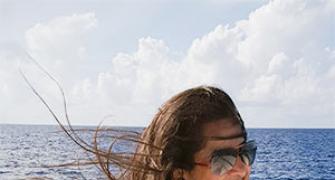 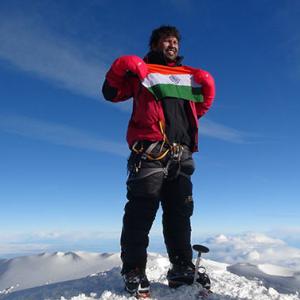