Rajneesh Gupta picks instances of sledging which backfired spectacularly and the players had to pay dearly for their misadventures. Sachin Tendulkar had made a name for himself with the way he had faced the best bowlers in the business at the age of 16.

After the Test series was drawn 0-0, the focus shifted to the one-dayers.

The first one-dayer was scheduled at Peshawar. However, it rained before the game, and the light was poor and the atmosphere hazy on the match day.

Play appeared unlikely, but for the sake of over 30,000-strong crowd, the match was converted in to a 20-overs-a-side exhibition match.

The Pakistanis batted first and scored 157/4.

India seemed to be losing their way and were 88/3 when Sachin joined Captain Krishnamachari Srikkanth in the middle.

The asking rate was 15 runs per over.

Sachin then hit young leg-spinner Mushtaq Ahmed for two sixes in one over.

When this happened, master of guile Abdul Qadir went up to Tendulkar and said, 'Bachchon ko kyon mar rahe ho? Hamein bhi maar kedikhao (Why are you hitting kids? Try and hit me).'

Sachin didn't utter a word. What followed next left everyone speechless as Qadir -- the most feared leg-spinner of his time -- was hit for three sixes and one four in the over.

It was not simple slogging, but proper clean hits with wonderful timing.

India lost the match, but found a legend that day. The encounter inspired high passions across the border. India chose to bat first and put on a respectable total of 287/8.

Pakistan were docked off one over because of their slow over rate. The loss of an over didn't make any difference to openers Aamer Sohail and Saeed Anwar as they launched a tremendous assault on the Indian bowlers.

The first 10 overs produced 84 runs and it seemed Pakistan would chase down the target with plenty to spare.

Saeed Anwar finally got out after scoring 48 from 32 balls, but stand-in captain Aamer Sohail kept cruising along nicely.

Sohail was a man on a mission, hell-bent on demolishing the Indian bowling. But in doing so, he went too far with his antics.

Venkatesh Prasad was recalled to the attack and Sohail came down the wicket to hit him through the covers.

After hitting the boundary, Sohail gestured at the bowler as if telling him where he would dispatch his next ball.

Prasad disturbed Sohail's furniture off the very next ball and furiously showed him where the pavilion was!

It was a huge error on Sohail's part because not only did he lose his wicket, but his sledging fired up Prasad who followed up with the wickets of Ijaz Ahmed and Inzamam-ul Haq.

Pakistan lost the match by 39 runs. The West Indies were playing a Test against Pakistan at Multan in 2006-2007.

In reply, the West Indies got a fine start by Chris Gayle and Darren Ganga who put on 162 runs for the first wicket.

This partnership was broken by Danish Kaneria and in came Brian Lara who soon got in to his groove.

Kaneria had been Pakistan's best bowler on the show, but this hardly mattered to Lara who kept milking runs. This perhaps frustrated Kaneria.

At the start of his new over, Lara dispatched the first ball to the boundary and then played a defensive shot off the second.

The next four balls of the over were hit by Lara for 6, 6, 6 and 4. The over produced 26 runs and Kaneria was shown his place. S Sreesanth and Andre Nel -- two of the most bubbly cricketers -- ]clashed in Johannesburg when India played South Africa in 2006-2007. It was Sreesanth who came on top.

When Sreesanth came out to bat, Nel told him, 'I can smell blood. You do not have the guts.'

Showing his emblem on the shirt, Nel said, 'I am playing for this. You are a scared fellow, rabbit. I will get you next ball.'

Before delivering the next ball, Nel also asked wicket-keeper Mark Boucher to stay back and also moved the short-leg fielder.

Being a fast bowler himself, Sreesanth knew Nel was going to bowl a bouncer, so he was ready for him.

When the ball was delivered, Sreesanth stepped out and hit the ball with all his might. It connected well and the ball sailed over the long-off boundary leaving Nel flummoxed.

As if this treatment was not enough, Sreesanth then whirled the bat and began a fervent dance on the pitch to mock the bowler who had nothing to do but to walk back.

India went on to win the Test by 123 runs. Sreesanth ended with eight scalps in the match.

The 2007 Nottingham Test between England and India was an ill-tempered affair remembered as 'Jellygate'.

Zaheer came out to bat with India at 464/7 and saw some jelly beans left on the pitch.

Zaheer removed some from the pitch, but found some more were thrown at the pitch after playing a ball.

Obviously someone was chucking them from behind him, which Zak didn't like.

Zak pointed his bat angrily at Kevin Pietersen, but since Pietersen was several yards away at gully, the culprit was someone else, fielding close enough may be at short leg.

The English fielders came hard at Zak, making fun of him.

Not the one to back away, Zak responded in style as he ran through the England batting line-up in the second innings, taking 5/75 to add to his first innings tally of 4/59, giving India a memorable win.

After the match, Zak said he felt 'insulted' at the incident, but it inspired him to do well and the rest is history.

England Captain Michael Vaughan was forced to issue an apology after the game. 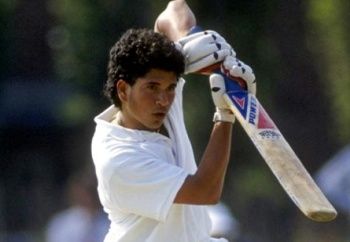