Which Indian batsman has the highest run tally against Sri Lanka (Clue: He has an aggregate of 1,995 runs)?

Which Sri Lankan skipper led the islanders against India in 13 Tests and did not win a single one? 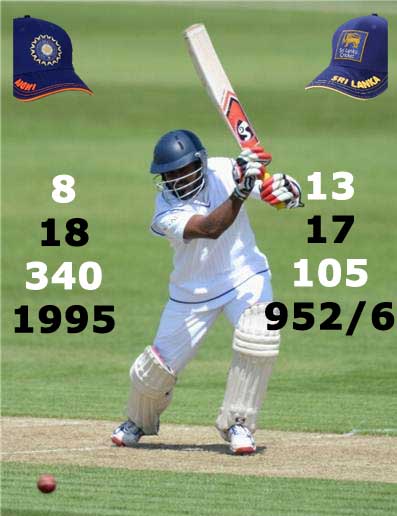 As the Test series gets underway, Rajneesh Gupta surveys India-Sri Lanka Tests played over the years.

8
Number of times India won a Test by innings margin against Sri Lanka -- most such wins for them against any opponent.

28
Number of times toss-winning team batted first in 35 meetings. Last captain to insert opposition in to bat after winning the toss was Sourav Ganguly at Kandy in August 2001. India won by 7 wickets.

1,995
Runs scored by Sachin Tendulkar against Sri Lanka -- most by any batsman in India-Sri Lanka Tests. For Sri Lanka, Mahela Jayawardene has scored the most runs (1,822).

105
Number of wickets taken by Muttiah Muralitharan against India. His tally is the highest by any bowler versus India and not just by a Sri Lankan. For India, Anil Kumble -- with 74 wkts -- is the most successful.

18
Number of sixes hit by Navjot Singh Sidhu -- the most by any batsman in India-Sri Lanka Tests. Nobody has hit more sixes versus Sri Lanka than Sidhu. 8 of those Sidhu sixes came in one innings of the 1993-1994 Lucknow Test, mostly off Murali's bowling.

27
Number of catches taken by Mohammad Azharuddin against Sri Lanka. A record by any fielder until Pakistan's Younis Khan recently bettered it.

340
Sanath Jayasuriya's score at Colombo's R Premadasa Stadium in 1997. He is the only player to score a triple ton versus India. Virender Sehwag's 293 at the Brabourne Stadium in 2009-2010 is the highest by an Indian against Sri Lanka.

13
Number of Tests in which Arjuna Ranatunga led Sri Lanka against India -- a record for any captain in India-Sri Lanka duels. He did not win a single Test, losing five and drawing eight.

1
Ishant Sharma is the only Indian player to bag a pair against Sri Lanka. As many as six Sri Lankans have suffered this fate against India, with Marvan Atapattu experiencing the ignominy twice.

284
Runs scored by Virender Sehwag in one single day during his innings of 293 at the Brabourne Stadium in 2009-2010. No one has scored even 200 in a single day in an India-Sri Lanka Test.

952/6
Sri Lanka's total at the R Premadasa Stadium in Colombo in 1997. It is the highest total recorded in Test cricket.

74
Number of balls taken by Kapil Dev to reach his century at Kanpur in 1986-1987 -- the fastest century in India-Sri Lanka Tests. Sanath Jayasuriya (105 balls) recorded the fastest ton by a Sri Lankan batsman at Galle in 2001.

5
Number of times India enforced the follow-on over Sri Lanka. India were at the receiving end twice. All these instances came in the home Tests for both sides. On all seven occasions the team enforcing the follow-on went on to win the Test.

12
Number of ducks inflicted by Muttiah Muralitharan -- the most by any bowler in India-Sri Lanka Tests. The Indian record is 10 -- shared by Kapil Dev and Anil Kumble.

22
Dismissals made by Amal Silva behind the stumps during the 1985 series, still a record in a three-match series.

5
Number of Sri Lankan batsmen who got out twice on the same day (Day 4, Bangalore Test in 1993-1994). The batsmen to suffer this fate were: Roshan Mahanama, Arjuna Ranatunga, Sanath Jayasuriya, Hashan Tillakaratne and Pubudu Dassanayake. 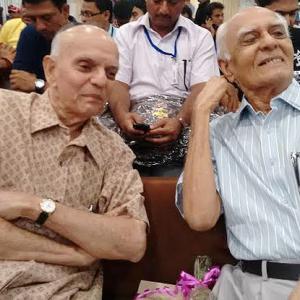