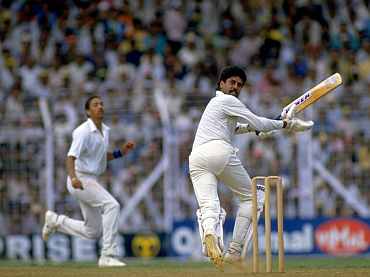 It's been disappointing twice over.

- A strategy to win the World Cup

We are referring to Team India's fortunes when they have hosted the World Cup.

In 1987, Kapil Dev's team was favourites going into the tournament. The World Cup was being held for the first time outside England -- India and Pakistan being the co-hosts -- and the defending champions were expected to retain their title.

Despite losing to Australia by a run in Chennai (Madras) in their opening match, India won five on the trot to qualify for the last four and justify their status to an extent.

However, when it mattered the most, Kapil Dev's men flattered to deceive.

A disappointing 35-run defeat to England at the Wankhede ended all hopes Team India had harbored of defending their title.

Day when Eden crowd their cool 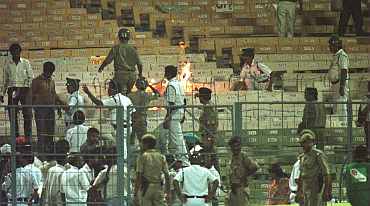 Nine years on, India played hosts yet again, along with Pakistan and Sri Lanka.

However, it was a bigger disappointment on this occasion.

Having qualified for the semi-final despite suffering defeats at the hands of both Australia and Sri Lanka, Team India had to suffer the ignominy of losing the semi-final by default.

Chasing a formidable target (252) to win at the Eden Gardens, Mohammad Azharuddin's men seemed well on course at 98 for one, when Sachin Tendulkar (65) was dismissed.

Thereafter, there was a procession of wickets and soon the co-hosts had been reduced to 120 for eight.

Then the passionate Eden crowd lost it. What followed was mayhem, the situation going out of hand in quick time.

The match officials had no option than call off the game and declare Sri Lanka winners by default -- the only such instance in cricket till date.

Who can forget images of an inconsolable Vinod Kambli, in tears, even as he walked back to the pavilion?

Both teams have done well in the WC so far 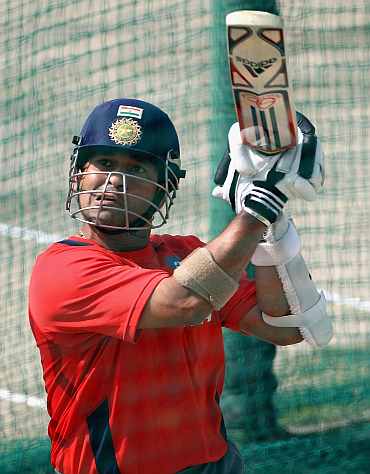 After 15 years now, India is hosting the event for a third time -- along with Sri Lanka and Bangladesh -- and is favourites to win again.

A series of favourable results has ensured MS Dhoni's men a place in the semi-final, a hurdle Team India failed to clear on the two previous occasions when they hosted the event.

The arch-rivals clash in a highly-anticipated encounter at the PCA stadium in Mohali on Wednesday. And at stake is a place in the final.

Both the teams played well in this tournament thus far, having lost only a match apiece in the seven played. 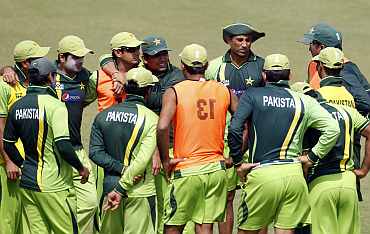 Image: Pakistan team during a practice session in Mohali

While Team India will be keen on getting over the psychological hurdle and going a step further in their quest to add to that solitary world title won 28 years ago, Pakistan has enough motivation as well.

Mired in a plethora of controversies -- spot-fixing, captaincy issues et al -- in the recent months, Pakistan is keen to set the record straight and make the world see its cricket in positive light yet again.

"It is important we play well and people start believing again that we are a good cricketing nation" admitted coach Waqar Younis, adding, "We have been through a lot of ups and downs in recent times.

"And that has made us believe that we can do well in this World Cup.

India has not lost to Pak in WC 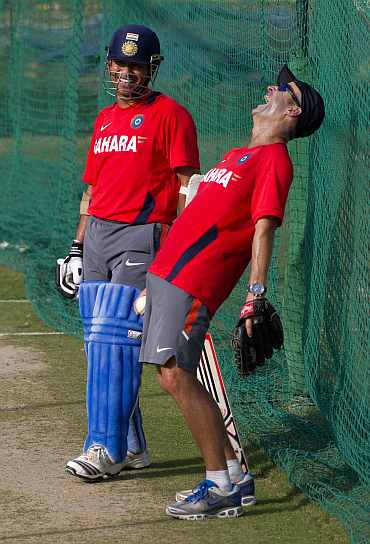 While the recent record between the teams in even -- five wins each in the last 10 matches, Pakistan can take inspiration from the fact that their overall record against their neighbours is pretty impressive -- 69 wins against just 46 losses.

Besides, the last time the neighbours played in Mohali (in November 2007), Pakistan managed to chase down a formidable Indian target (322) with relative ease.

However, Team India does have a psychological advantage as well.

In their four World Cup matches played against Pakistan since 1992, when they first met, Team India has come out trumps on each occasion, not letting their arch-rivals even close to winning any of them.

And that is a significant edge MS Dhoni's men take going into their fifth encounter with Pakistan at the World Cup.

Will they be able to stop the Pakistan juggernaut yet again in cricket's flagship tournament?

Will Mohali ensure something that Wankhede and Eden Gardens couldn't?

Will Team India be third time lucky as the hosts?

Come Wednesday, all these questions will be answered!