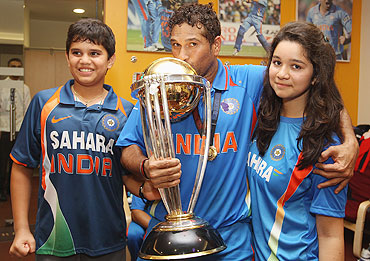 There was no 100th century milestone for Sachin Tendulkar on Saturday but the Little Master did not care as he shed "happy tears" after finally getting his hands on the World Cup at the sixth time of asking.

A billion Indians had anticipated Tendulkar, the world's most prolific run scorer, would collect a century of international centuries in the showpiece match but that dream was shattered when he was dismissed for 18.

A ghostly silence had descended on his home ground of Wankhede Stadium after Lasith Malinga tempted him with a vicious outswinger which Tendulkar edged behind for Kumar Sangakkara to complete a low diving catch.

Bat tucked under his arm, Mumbai's favourite son trudged back to the pavilion as the 33,000 fans suddenly lost their collective voice, scarcely believing what they had just witnessed.

But three hours later, Tendulkar's rare failure with the bat was all but forgotten as captain Mahendra Singh Dhoni clobbered a six over long on to trigger wild celebrations up and down the country. 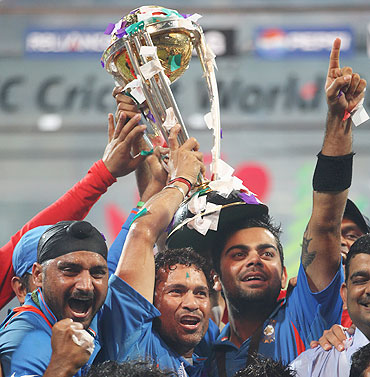 The night sky over the Wankhede stadium lit up with breathtaking fireworks as the Indians then took another lap of honour holding aloft the trophy and again the crowd cheered them lustily.

Tendulkar's children Sara and Arjun also joined the team for a while and also had a chance to touch the Cup.

Tendulkar's team mates ran on to the field and hoisted the best batsman of modern times on to their shoulders and carried him around for a lap of honour in front of the hollering fans.

"He has carried the burden of the nation for 21 years so it's time we carried him on our shoulders," batsman Virat Kohli said, summing up the feelings of a grateful nation.

'It's the proudest moment of my life' 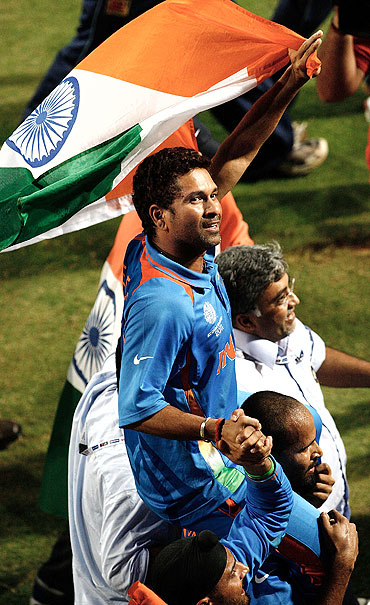 An emotional Tendulkar, draped in an Indian tri-colour, could not hold back the tears.

"It's the proudest moment of my life. It's never too late," said Tendulkar, who had been a member of the team that was runner-up to Australia in 2003.

"It's terrific to be part of this team, a great honour. Thanks to my colleagues, it would not have been possible without them.

"I could not really control my tears but those were happy tears and I don't mind it."

Tendulkar regularly dismisses retirement talks but even his most ardent fans do not expect the batsman, who turns 38 on April 24, to play in the 2015 edition of the tournament. 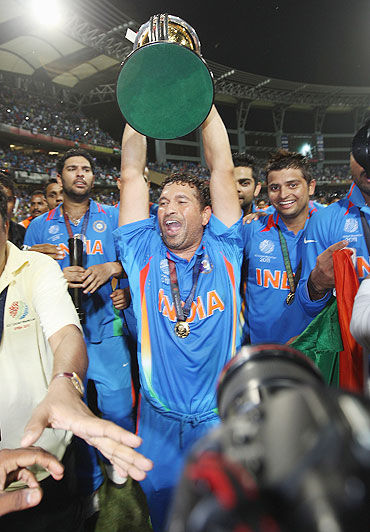 Image: Sachin Tendulkar is chaired on a lap of honor after India's victory over Sri Lanka
Photographs: Getty Images

The crowd at the Wankhede Stadium and the millions glued to their TV sets across the country had almost taken it for granted that Tendulkar would score his 100th international century and the early signs were promising too.

Malinga had sent groans across the stadium by claiming Virender Sehwag's wicket with the second ball of the Indian innings but Tendulkar lifted the pall of gloom, a job he has been tirelessly performing throughout his career, with two boundaries off Nuwan Kulasekara's second over.

The second one, a majestic straight drive straight out of the copy book, was clearly the shot of the day that came right off the meat of the bat as a statement of his sublime touch.

Malinga, however, was lurking around to spoil the party.

The maverick Sri Lankan bowler with a unique action and streaked hair banged one outside off-stump and moved it away, inducing an edge from the same blade that was middling every delivery until that aberration.